What is a Ponzi Scheme and why should you care?

Ponzi schemes are thriving at an alarming rate, thanks to the growth of tech-driven alternative finance. Data from Ponzitracker shows that investors have lost nearly $60 billion in over 800 Ponzi schemes from 2008 to 2018. But what is a Ponzi scheme and how does it work?

A Ponzi scheme is an investment scam that promises unjustifiably high returns to investors at minimal or no risk. The scheme dupes investors into believing that the returns they receive are from a real investment. However, the truth of the matter is that there is no investment and the return paid to investors is from new deposits. In other words, the money received from a new investor is used to settle a return guaranteed to the old investors.

Ponzi schemes are somehow similar to Pyramid schemes in that they all sustain themselves from deposits. However, Pyramid schemes require participants to recruit new members to make money. Ponzi Schemes, on the other hand, are usually camouflaged as real investments and are hard to detect for the untrained eye.

The term Ponzi Scheme dates back in the early 1920s when Charles Ponzi, an Italian con artist, scammed thousands of people through a genius money-making scheme. Ponzi promised his clients a return of 50% within 45 days or 100% within 90 days if they invested in his lucrative postal reply coupons business.

However, it later emerged that Ponzi was not making any money from the postal coupons business but was instead using the deposits from new investors to pay early investors. The positive vibe from the payments usually attracted new investors in large droves hence sustaining the scheme for over a year.

Ponzi’s life of luxury raised suspicion with several media personalities expressing doubt on the possibility of the earnings reported by Ponzi. The number of deposits declined with growing suspicion leading to a decline in deposits and eventually the collapse of the scheme.

Charles Ponzi was finally arrested and sentenced for operating a fraudulent scheme. The term Ponzi scheme was adopted and is used to denote to similar types of scams.

What is your sentiment on MATIC/USD?

Give MATIC/USD a try

In early 2009, Bernie Madoff, a renowned wealth manager and former chairman of the Nasdaq Stock Market, pleaded guilty to running what is known as the world's largest and famous Ponzi scheme ever.

According to prosecutors, Madoff had defrauded over 4800 clients a whopping $64.8 billion in a period of 20 years. The court found him culpable sentencing him to a maximum of 150 years in federal prison.

But how did the Ponzi scheme work? In 1960, Madoff founded an investment firm known as Bernard L. Madoff Investment Securities. The firm was a leading market maker on Wall Street and also had an investment management and advisory division.

The wealth management division collected deposits from elite investors with a promise of returns above the market rate. What baffled most financial analysts was how the Madoff firm managed to maintain a high return despite changing market conditions.

But as it later emerged, Madoff did not invest but was using deposits from new investors to pay the promised return. The Madoff Ponzi scheme became apparent when new deposits declined, and the firm had no money to pay the old investors.

Bitcoin’s rise and other cryptocurrencies has fueled the growth of Ponzi schemes in tech-driven investments. These types of scams promise investors thousands of dollars in profits per day from a minimum investment of as little as $250.

A good example is Bitconnect, a scheme that defrauded investors billions of dollars by claiming to invest money for them at a return of 1% daily. The platform claimed it posessed a powerful trading bot that could speculate on cryptocurrencies with a 99% win rate.

However, it later emerged that Bitconnect did not have such a trading bot and was using money from new deposits to pay early investors. The scheme eventually collapsed, leading to a loss of $1.5 billion of investors money.  Since the fall of Bitconnect, a lot of similar platforms have emerged in the name of crypto trading robots. These robots continue to swindle investors with vague technologies and ridiculous promises.

As mentioned above, Ponzi Schemes are different from Pyramid schemes. For the record, a Pyramid scheme involves the scammer requiring investors to recruit other investors for a return. The investor's earnings are dependent on the number of investors they recruit.

Most Ponzi schemes camouflage themselves as multi-level marketing companies. However, their primary focus is on recruiting new members at a given fee. They may claim to be distributing a given product, but it is usually a sideshow.

Like Ponzi schemes, Pyramid schemes eventually collapse when there are no new members to join.

How to avoid Ponzi schemes

You have to understand the key characteristics of a Ponzi scheme to be able to detect and avoid them. The first telltale sign is that they are quick to promise unjustifiably high returns at little or no risk. Secondly, the guaranteed returns are consistent irrespective of changing market conditions. 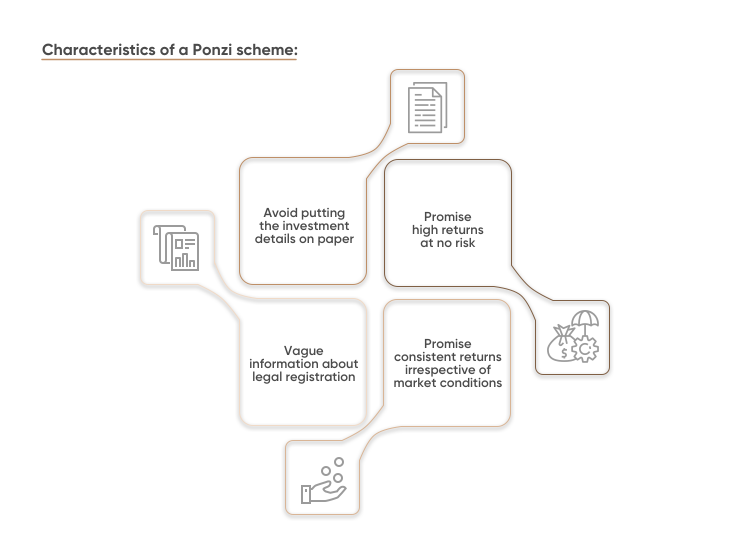 Ponzi schemes also tend to provide vague information about their legal registration. A background check will most likely reveal that they are not regulated. Moreover, their investment advisors or "experts" are usually not licensed and have no credentials to show.

The scams are also likely to avoid putting the investment details on paper. Moreover, they are likely to encourage you to roll over investments for a higher return.

Will there be a housing market crash?