VanEck Gold Miners ETF: Why has it nearly halved in value since April?

The VanEck Gold Miners’ ETF (GDX) has dropped about 45% from its April highs and is currently trading at more than two and a half year lows. The index is comprised of the top 53 gold miners in the world and gives a very indicative reflection of the health of the gold mining industry currently.

Gold has been harmed over the past months due to a consistently rising US dollar (DXY), as well as speculations of the US Federal Reserve continuing on its aggressive monetary tightening policy.

VanEck Gold Miners ETF (GDX) has fallen about 45% since April

Why has the GDX fallen so much since April?

According to Piero Cingari, analyst at Capital.com, “Lower gold prices, rising input costs such as energy, and higher interest rates, which dampened capex, have all contributed to the gold mining sector's bear market and the negative performance of VanEck Gold Miners ETF (GDX).

A 45% drop from peak appears to be quite severe, but on previous occasions, such as the bear market between August 2011 and August 2015, GDX had dropped by 80% from its peak. GDX also fell by 70% between March and October 2008.Thus, even if gold mining stocks have dropped significantly and the RSI has already entered oversold levels, there is no guarantee that GDX will not fall further from here.

The downside risks, of course, are related to the global growth outlook, which dampens consumers’ demand for gold, as well as higher interest rates from major central banks, which weigh on the price of the bullion. Furthermore, renewed Chinese lockdowns pose a risk to the gold mining industry, given that China is the world’s largest consumer of gold.

There are also upside opportunities, even if the market has yet to price them in. First and foremost, China has the room to announce additional policy stimulus in the form of lower interest rates and increased government spending. That could provide support to the whole metals market.

Second, if consumers’ and investors’ inflation expectations continue to rise despite higher interest rates, it could indicate that monetary policy is losing its grip on the price stability mandate, leading to a loss of trust in fiat currencies and increased demand for gold as a hedge against the erosion of real purchasing power.”

China has already slashed its 7-day interest rates, which are key for bank short-term liquidity from 2.1% to 2%, and one-year benchmark interest rates from 2.85% to 2.75%. These rates have both been reduced for the first time since January and are expected to help bolster the economy somewhat after the effects of rising COVID-19 cases and renewed lockdowns. 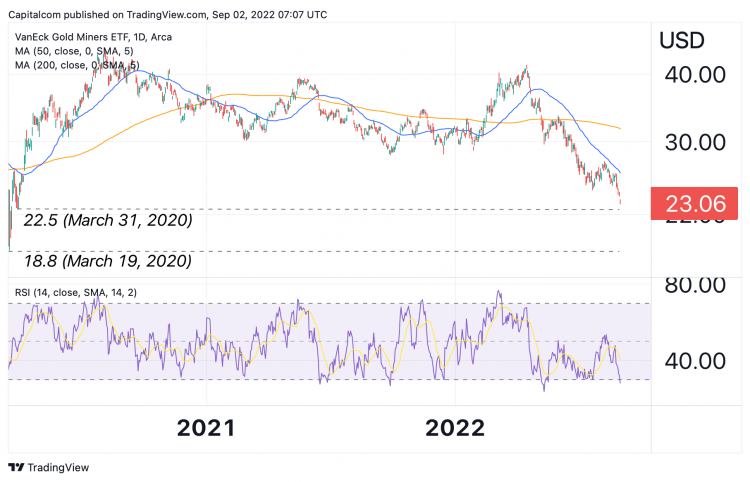 The VanEck Gold Miners ETF has dipped about 45% since April 2022 – Credit: TradingView

Who are some of the outperformers and underperformers of the GDX?

Newmont Corporation (NEM), the biggest gold miner on the GDX, has dropped about 51% since April 2022, definitely underperforming the index, which has dropped about 45% in the same time. However, with a longer timeline, the miner has returned approximately 22.4% over the last 5 years. Recently, the miner has filed an early warning report regarding its ongoing investment in Orla Mining.

Newmont Corporation (NEM) has fallen more than 51% since April

Barrick Gold (ABX) has narrowly outperformed the GDX, with a loss of about 42% since April, however, has been more disappointing over the longer term, with declines in year-to-date as well as 5-year returns. The company has recently closed a deal worth about $60 million to offload its royalty portfolio to Maverix, which will include 22 royalties regarding mineral production.

Franco-Nevada Mines (FNV) has also outperformed the GDX, although it has still fallen about 28% since April. Although the year-to-date returns are slightly disappointing, it has really shone over the last five years, with a return of more than 50%.

Wheaton Precious Metals (WPM) has been another gold miner which has shown tremendous value and potential over the last five years as well. However, investors are worried about whether this trend will continue with the miner having recently announced an agreement to end its current silver stream on the Yauliyacu Mine.

What is the outlook for gold miners for the rest of the year?

In the coming few months, the US Federal Reserve is likely to keep raising interest rates, having previously hinted heavily at another 75-basis points hike in September, which would be the third consecutive hike of this scale. Not only that, but the latest US non-farm payroll data for August, which came in better than expected, is also likely to be a green signal for the US Fed to keep up with its aggressive monetary tightening policy.

In this case, gold is likely to be severely pressured in the coming few months, with rising interest rates. In such a scenario, large-cap gold miners such as the one on the GDX are likely to do relatively better, as they typically have better balance sheets, with less debt and as such, are not as impacted by rising interest rates. Smaller gold miners such as the ones on the GDXJ, on the other hand, will likely suffer more, since they are often highly leveraged. GDX’s performance has been more or less consistent with the VanEck Junior Gold Miners’ ETF (GDXJ)’s performance as well, with the latter having dropped about 45% since April too. However, in times of rallying gold, the GDXJ is likely to outperform the GDX, due to it being more sensitive to the growth outlook.

Although gold can face considerable pressure from interest rates for the rest of the year, it is still benefiting from some safe haven demand, as uncertainties from the ongoing Russia-Ukraine war, energy crisis and supply chain constraints continue to worry investors. This is combined with the falling purchasing power of fiat currency.

Could new Russia metals exchange have an impact on gold prices?