The London-listed share price for Anglo-Australian firm Rio Tinto (RIO), the world’s second largest metals and mining firm, has gained more than 20% in the past month.

The RIO stock price has found support on speculation that China will soon begin to relax its zero-Covid policy, which would increase demand from the world’s largest consumer of iron ore and other metals.

In addition, US inflation data for October showed consumer prices increased by a lower than expected 7.7%, down for a fourth straight month to their lowest level since January, raising expectations that the US Federal Reserve (Fed) will soften its hawkish monetary policy.

What does that mean for Rio Tinto’s outlook heading into 2023?

We look at the stock’s recent performance and some of the latest analyst Rio Tinto stock predictions.

Rio Tinto was founded in Spain in 1873, when a syndicate including Deutsche Bank, Matheson and Company, and civil engineering firm Clark, Punchard and Company purchased a mine complex on the Rio Tinto from the Spanish government.

Over the years the company has expanded through mergers and acquisitions. It has joint headquarters in London and Melbourne. Rio Tinto’s stock is listed on the Australian Securities Exchange (ASX) and the London Stock Exchange (LSE), and American Depositary Shares (ADSs) of the UK stock are traded on the New York Stock Exchange (NYSE).

Rio Tinto is primarily focused on mineral extraction, including aluminium, copper, industrial minerals, precious metals, diamonds and uranium, but also has substantial refining operations, particularly bauxite and iron ore. The company operates on six continents, although most of its activities are based in Australia and Canada.

What is your sentiment on RIOgb?

As one of the world’s largest commodity producers, Rio Tinto’s share price is strongly influenced by commodity prices and demand. The stock soared during the 2007-2008 commodity boom and subsequently crashed in 2009 during the global financial crisis as demand collapsed. More recently, the stock had recovered in 2019 to its highest levels since the crisis, but then dropped back in 2020 as the Covid-19 pandemic initially hit demand.

The rapid recovery in commodity prices during the pandemic lifted the share price, and with the Russia-Ukraine conflict this year further tightening markets, the stock set a new all-time high above £60 on the LSE in March. The RIO stock price declined to £44.86 in late October, but has recovered to £55.29 on the prospect of rising demand from China and a slowdown in the pace of US interest rate hikes. 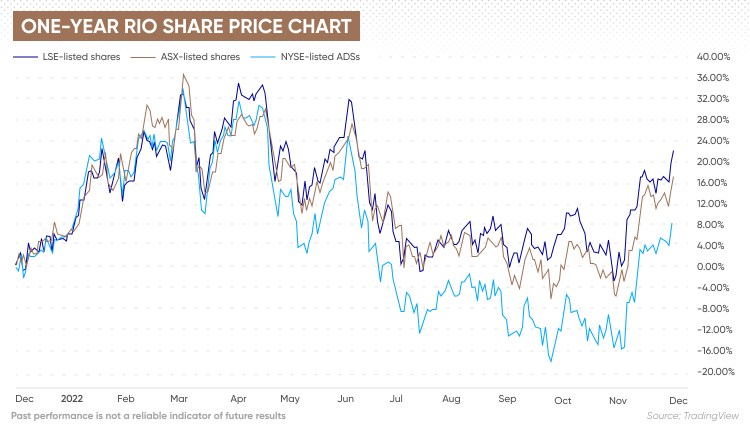 Prices for iron ore and other commodities have also driven the direction of the share price. Rio Tinto derives its largest proportion of earnings from iron ore, and the average price has fallen from last year because of weakening demand in China during Covid-19 lockdowns. The ongoing real estate crisis in China is also having an impact as the construction industry consumes large volumes of iron ore. Hence, the potential for China to ease its tight Covid-19 restrictions is driving the stock price.

On 22 November, Rio Tinto announced that it has “proven the effectiveness of its low-carbon iron-making process using ores from its mines in Australia in a small-scale pilot plant in Germany, and is now planning the development of a larger-scale pilot plant to further assess its potential to help decarbonise the steel value chain.”

The BioIron process uses raw biomass instead of metallurgical coal as a reductant and microwave energy to refine iron metal from Pilbara (Western Australia) iron ore in steelmaking. BioIron has the potential to cut carbon dioxide (CO2) emissions from steelmaking close to zero, and can result in net negative CO2 emissions if it is used alongside carbon capture and storage, the company said.

On 30 November, the company reported that it intends to invest an extra $600m in renewable energy assets in the Pilbara region. This comes after Rio Tinto announced in October 2021 its $7.5bn plan to halve its carbon emissions by 2030.

Turquoise Hill Resources that it does not already own, to simplify its management of Mongolia’s Oyu Tolgoi copper mine that it operates. The deal has raised objections from two minority shareholders. On 17 November, the company stated that the negotiations it had announced on 1 November had been unsuccessful. Rio Tinto said:

212.97 Price
+1.310% 1D Chg, %
Trade Now
Swap short:
Swap long:
Trade Now
“While Rio Tinto’s proposed transaction to acquire, by way of a plan of arrangement (the “Arrangement”), the approximately 49% of the issued and outstanding shares of Turquoise Hill that Rio Tinto does not own for C$43.00 per share in cash (the “Proposed Transaction”) will proceed, there is no assurance that any of the Named Securityholders will continue to withhold their vote or whether any of them will vote for or against the Arrangement.”

In its third-quarter production report on 18 October, Rio Tinto said that its Pilbara iron ore operations in Australia produced 84.3 million tonnes, up 1% from the third quarter of 2021 and 7% from the previous quarter, with continued commissioning and ramping up of its Gudai-Darri and Robe Valley mines. The company shipped 82.9 million tonnes, down 1% from the third quarter of 2021 but up 4% from the previous quarter, despite two unplanned rail outages. The company expects full-year shipments to come in at the low end of its 320 million to 335 million tonne guidance.

On 14 September, Rio Tinto agreed to form a joint venture with China Baowu Steel Group to invest a total of $2bn in the Western Range iron ore project in the Pilbara, with Rio Tinto contributing $1.3bn to develop the mine. Construction of the 25 million tonne operation is expected to begin in early 2023 and production is expected to start in 2025.

Rio Tinto produced 13.7 million tonnes of bauxite, down 2% year-on-year because of equipment reliability issues. The company produced 800,000 tonnes of aluminium, down by 2% year-on-year, but up by 4% from the previous quarter as it ramped up smelter output.

Rio Tinto reduced its copper production guidance to 190,000-220,000 tonnes from 230,000-290,000 tonnes, as it is cautious about Kennecott’s performance until it carries out its largest rebuild in nine years in the second quarter of 2023. In September the company approved a $55m investment to start underground mining and expand production at Kennecott.

What is the outlook for the Rio Tinto share price next year? Let’s look at some of the latest analyst forecasts.

Rio Tinto stock forecast: Will the share price return to the highs?

At the time of writing, the average 12-month price target from eight Wall Street analysts that have issued a Rio Tinto share price forecast was £52.79 a share, down from the current £55 level, with predictions ranging between £40 and £68, according to data compiled by MarketBeat. Three analysts have issued three buy ratings, three have hold recommendations, while two analysts rate the stock as a sell.

Following the company’s production report on 18 October, analysts at Credit Suisse (CS) set a price target of £58. Analysts at Berenberg Bank reiterated their selling rating with the £40 RIO stock forecast at the low end of the range.

More recently, on 23 November, Deutsche Bank (DB) analysts raised their Rio Tinto stock forecast from £57 to £58, with a hold rating.

Are you looking for a Rio Tinto stock forecast to inform your trading? Keep in mind that stock market volatility makes it difficult for analysts and algorithm-based forecasters to come up with accurate long-term predictions. As such, they can and do get their predictions wrong.

We recommend that you always do your own research. Look at the latest market trends, news, technical and fundamental analysis, and expert opinion before making any investment decision. Keep in mind that past performance is no guarantee of future returns. And never invest money you cannot afford to lose.

TSLA 184.13
Trade
+0.790%
AMZN 107.50
Trade
-0.110%
BBBY 3.19
Trade
+14.230%
META 185.13
Trade
+2.180%
NVDA 212.97
Trade
+1.310%
The difference between trading assets and CFDs
The main difference between CFD trading and trading assets, such as commodities and stocks, is that you don’t own the underlying asset when you trade on a CFD.
You can still benefit if the market moves in your favour, or make a loss if it moves against you. However, with traditional trading you enter a contract to exchange the legal ownership of the individual shares or the commodities for money, and you own this until you sell it again.
CFDs are leveraged products, which means that you only need to deposit a percentage of the full value of the CFD trade in order to open a position. But with traditional trading, you buy the assets for the full amount. In the UK, there is no stamp duty on CFD trading, but there is when you buy stocks, for example.
CFDs attract overnight costs to hold the trades (unless you use 1-1 leverage), which makes them more suited to short-term trading opportunities. Stocks and commodities are more normally bought and held for longer. You might also pay a broker commission or fees when buying and selling assets direct and you’d need somewhere to store them safely.
Capital Com is an execution-only service provider. The material provided on this website is for information purposes only and should not be understood as an investment advice. Any opinion that may be provided on this page does not constitute a recommendation by Capital Com or its agents. We do not make any representations or warranty on the accuracy or completeness of the information that is provided on this page. If you rely on the information on this page then you do so entirely on your own risk.