What is Request coin?

Request token price prediction: Does this payments platform have a bright future?

Request is a decentralised, Ethereum-based network that, like its name suggests, allows users to request and receive payments through secure means.

The Request Network is powered by the REQ token that was launched in 2017 and can be used to pay for fees associated with transactions conducted on the network.

The cryptocurrency is an ERC-20 token, which means that the supply of REQ decreases proportionally to the increasing adoption of the Request Network. This means that the higher the growth of the token’s price, the more deflationary the REQ token becomes – the number of REQ coins in circulation decreases making individual coins more valuable.

What is Request coin?

In 2014, a group of talented individuals including Etienne Tatur, Christophe Lassuyt, Vincent Rolland, Julien Devoir, Laura Girod and Elliott Denis got together with the aim of creating an international transfer system based on Bitcoin that could potentially develop into a global network that aggregates money transfer solutions and allows monthly transfers of several million dollars.

With that in mind, the team of creators developed a number of platforms – such as destinesia.io, theblockchainnetwork.com, neomy.io and moneytis.com – before settling with the Request Network in August 2017 that aims to build “the future of finance in the new decentralized economy.”

The Network’s inner workings are actually pretty simple. The process to request and receive payments, coined Request Invoice, works as any other peer-to-peer payment. Person A sends an invoice to Person B through the blockchain that can be paid in one click. Request payments can also be further expanded and used for online purchases and business-to-business invoices.

But what makes the Request Network different from other peer-to-peer payment applications, such as the likes of PayPal, for example?

According to the Network, Request offers:

The REQ token is a necessary asset that helps the Network operate and allows users to participate in it, creates advanced Requests and rewards various parties who will help build the blockchain’s ecosystem.

While using the Network, users are asked to pay a fee in REQ, which is then burned.

With an initial supply of nearly one billion tokens, four years since its launch the Network is circulating 999,877,116 coins. REQ coin has a market capitalisation of over $303m (as of 7 January 2022) and the Network has 81,000 community members. The coin is ranked 169th on CoinMarketCap and has a market dominance rating of 0.02%.

The REQ token has struggled through quite a ride during its five years of circulation reaching an all-time-high of $1.18 on 6 January 2018. After such success, the coin started to fall dramatically, dropping to $0.02733 by 21 November that same year.

After sideways to lower price action between August and November 2021, the REQ coin reached the yearly peak of $0.746 on 26 November, however, soon started to drop once again amid wider cryptocurrency sentiment shift.

Technical analysis provided by CoinCodex shows that short-term sentiment on REQ is bearish with 20 indicators showing bearish signals and 13 bullish, as of the time of writing. 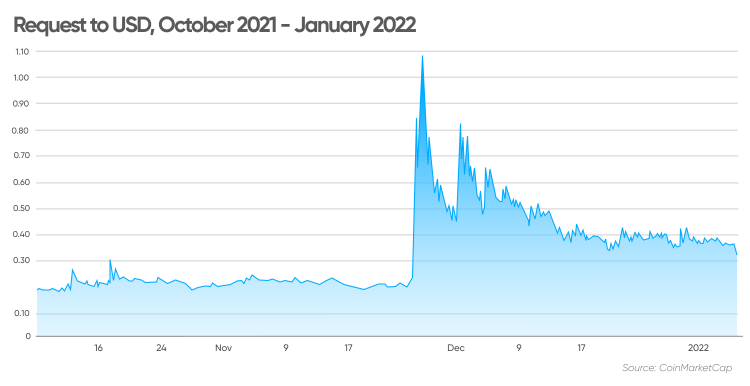 The all-time high reached by the REQ token on 6 January 2018 preceded the launch of Requify, a payment plug-in for e-commerce company Shopify that is operated through the Request Network. The functionality allows Shopify sellers to accept cryptocurrency payments with no additional setup or monthly fees, a huge step in making cryptocurrency a globally-accepted form of payment.

In 2018, Request joined the Wall Street Blockchain Alliance, introduced Request Donations on CoinGecko and opened an office in Amsterdam. Yet despite positive developments, by 20 November 2018 the cryptocurrency’s value dropped by 97.94% to $0.02425 since its all-time high in January.

For the next three years the price action moved lower until it started to gain momentum in early February 2021.

“Coinbase is the largest crypto exchange in the US and a favourite trading platform for institutional investors. REQ started trading on Coinbase in mid-August last year and its price quickly started to rise.”

The next catalyst event for the cryptocurrency’s value was the announcement of its support of Web3creators.com, an independent media channel that aims to help people build their projects and careers in decentralised finance (DeFi). The REQ coin grew once again between 24 and 26 November 2021.

In the most recent Request crypto news, the corporate adoption of the project was surging with Request Finance now used by more than 1,000 businesses, pushing the coin to a 48.58% daily gain to $0.6716 on 1 December 2021 from $0.452 opening price.

Request token price prediction: Does this payments platform have a bright future?

Based on its analysis of the cryptocurrency’s past performance, the forecasting service predicted that REQ could cost $0.791 next year and $2.451 in five years.

Please note that price predictions can be wrong. Forecasts shouldn’t be used as a substitute for your own research. Always conduct your own due diligence before investing. And never invest or trade money you cannot afford to lose.

Matjaz Skorjanc, the founder and mining manager of cryptocurrency mining and exchange platform NiceHash, said REQ’s focus on compliance and making crypto invoicing tax-friendly is one of the reasons why the REQ token had gained momentum.

“Add to this the fact that Ethereum gas fees are sky high, using Request is something that has become more attractive for other coin projects based on Ethereum to start using. Coins like Aave, Gnosis and Ocean, are all working with Request,” he told Capital.com.

Skorjanc added that as the Ethereum network struggles with high gas prices: “Request will gain even more popularity, and therefore we will likely see positive price action on REQ in the short term, and likely can continue its upward momentum as more mainstream accounting firms start to discover it's benefits.”

“Since more than 1,000 companies and [decentralised autonomous organisations] DAOs have used them, I hope they can continue to take the lead in this space and work on how Web 3.0 can and will change the payment space to another level,” he said.

Pax gold price prediction: Is it a goldmine?