Electric vehicle (EV) maker Lucid Group (LCID) may have the world’s longest-range production car, but its stock performance has been spiralling down.

As of 23 September, the Lucid stock price had dropped more than 62% year-to-date. In August, the company halved its production guideline. However, it still has a large number of institutional investors.

Who owns Lucid stock? We examine the biggest Lucid Group shareholders and what prompts them to hold the company’s stock.

Lucid Motors (LCID) is a California-based electric vehicle (EV) manufacturer. Lucid completed a merger with special purpose acquisition company (SPAC) Churchill Capital Corp. IV (CCIV) on July 23, 2021. As the merger completed, CCIV stock was delisted  from  the New York Stock Exchange (NYSE), where it had traded since July 2020. The combined company operates as Lucid Group, which is also involved in energy storage and original equipment manufacturing.

On July 26, 2021, Lucid Group became a publicly listed company trading on the Nasdaq Global Select Market with its Class A common stock and public warrants listed under the new ticker symbols 'LCID' and 'LCIDW', respectively.

At first, Atieva focused on developing electric batteries and powertrains for other vehicle manufacturers. The firm started to develop high performance, luxury EVs in 2016 when it was rebranded as Lucid Motors.

The company’s main product is the Lucid Air electric luxury sedan. By August 2022, the company had 37,000 reservations for Lucid Air and had delivered 679 units to customers.

In 2018, Saudi Arabia's Public Investment Fund (PIF) invested more than $1bn in Lucid Motors. The money will help fund the development, testing and production of Lucid Air, as well as the construction of a manufacturing facility in Arizona and the launch of the company's retail strategy in North America. In December 2019, the company began construction on the Arizona facility.

What is your sentiment on LCID?

Give LCID a try

However, things have been on the downward trajectory since then. The company’s share price suffered from a broader market sell-off of tech stocks and challenges to ramp up production.

Automakers, particularly EV manufacturers, have been hit by widespread semiconductor shortages since 2020, which delayed production and hurt sales. Chips are needed in car manufacturing for features such as automatic braking, power steering and airbag deployment. 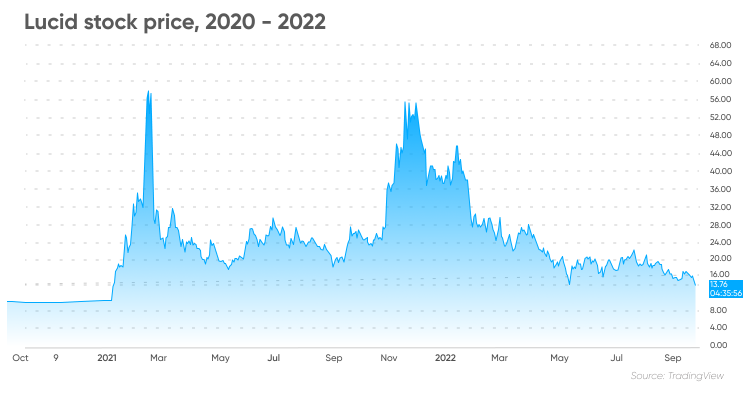 Before diving into who owns Lucid stock, let’s check how many Lucid Group shareholders are there? According to Nasdaq data, as of 23 September, Lucid had 1.672 billion outstanding shares spread across different types of investors.

About 53% of Lucid’s stock owners were institutional investors, while 47% were insider investors, according to WallStreetZen data, as of 23 September. In comparison, institutional shareholders accounted for 14.22% in Tesla (TSLA) and 49.43% in Ford (F).

Sovereign wealth funds, pension funds, banks, money managers and insurance companies are among the types of institutional investors who own Lucid shares.

Institutional investors typically have more financial muscle than retail investors, allowing them to trade big volumes of shares and exert significant influence on stock movements. Information on institutional holdings can be used to forecast a company’s volatility and value, according to Nasdaq.

Based on data compiled by Nasdaq and WallStreetZen, as of 23 September, Public Investment Fund, Vanguard Group and Blackrock (BLK) are three top LCID holders among institutional investors.

The Kingdom of Saudi Arabia’s sovereign wealth fund, the Public Investment Fund (PIF), owns the biggest amount of Lucid’s stock: 60.7% worth $15.80bn, according to July data from Security and Exchange Commission (SEC) filing.

As the Kingdom’s investment arm, PIF has a broad portfolio of domestic, regional, and international investments across asset classes and geographies. With  $6,120bn of assets under management (AUM), PIF is the world’s six largest sovereign wealth fund, according to data from SWFInstitute.

According to Nasdaq’s data, as of June 2022, consumer cyclicals account for the biggest portion in PIF investments (nearly 53%). Technology comes second (30.33%).

In addition to Lucid, the PIF has invested in several major US companies, including Starbucks (SBUX), Paypal Holdings (PYPL), Microsoft (MSFT) and Cotsco Wholesale Corporation (CSTO).

Lucid has started construction of its factory in Saudi Arabia, the  AMP-2, which will have the capacity to produce 155,000 EVs. It was part of an agreement that the company signed in February 2022 with the Kingdom’s government. As part of the deal, Saudi Arabia will purchase 100,000 Lucid’s cars over a 10-year period.

The company was founded in 2012 by investment banker Michael Klein, who has three decades of leadership experience at Citigroup.

Pennsylvania-based investment advisor Vanguard Group was the third biggest Lucid shareholder among institutions, with roughly 2.46% of the overall stock worth $642.12m, according to WallStreetZen and Nasdaq data, as of 23 September.

According to Advratings, Vanguard is the world’s second largest asset manager, with $7.5trn of AUM, as of 30 April 2022.

The company is well-known for its work in developing index-tracking mutual and exchange-traded funds (ETFs) that are easily accessible to retail investors. Such financial instruments are designed to track the performance of a benchmark index, such as the S&P 500 (US500) or the Nasdaq 100 (US Tech 100).

Lucid  insiders who own the most shares of LCID are the company’s CEO and Chief Technology Officer (CTO) Peter Dore Rawlinson, Director Turqi Alnowaiser, and Senior Vice President of Product and Chief Engineer Eric Bach, according to SEC filings data.

Peter Rawlinson has served as the company’s CEO and CTO since April 2019. Before joining Lucid, Rawlinson was Vice President of Vehicle Engineering and Chief Engineering at Tesla (TSLA). Rawlinson holds a 1.26% stake of 21.24 million shares, according to September SEC filings, making him Lucid's biggest individual insider investor.

Turqi Alnowaiser has been on the Lucid board of directors since 2019. Since June 2021, he has served as PIF’s deputy governor and head of the international investments division. As of 6 September 2022, Alnowaiser held roughly 2 million shares, representing a 0.12% stake in Lucid, according to SEC’s filings.

EV stocks Fisker and Lucid: why FSR and LCID are driving in different directions

How to trade in a bear market: Key strategies

What is Buying on Margin? Your guide to gaining magnified exposure to assets

Capital.com Lucid Group Shareholders | Who Owns the Most LCID Stock?