Litecoin price analysis: Will halving boost the price above $100?

The halving of Litecoin (LTC) is expected to happen on 3 August 2023. This event will reduce miner block rewards from 12.5 LTC to 6.25 LTC. Investors expect halving to boost the price of the asset as it increases the scarcity. Litecoin is well-above its June low and the bulls are trying to keep the price above $73 as of 6 January 2023.

Bill Barhydt, CEO of the crypto wealth management platform Abra, tweeted on 3 January that Litecoin was the only “decentralized p2p payment system with 10 years of uninterrupted uptime.”

Litecoin is the only decentralized p2p payment system with 10 years of uninterrupted uptime. (#Bitcoin will get there in 2023.) https://t.co/35ascaN0AE

Barhydt added that litecoin was faster than bitcoin in testing new technologies and settings and that helped bitcoin.

Large investors seem to be stocking up on litecoin over the past few days. According to crypto intelligence firm Santiment, the number of litecoin shark and whale addresses soared to a two-year high on 25 December 2022.

Another positive in favour of litecoin is that despite the crypto winter, the network completed more than 39 million transactions in 2022, which is a new record.

Could litecoin go up and hit the $100 mark over the next few days or will traders book profits and start a short-term correction? Read the LTC price analysis to find out. 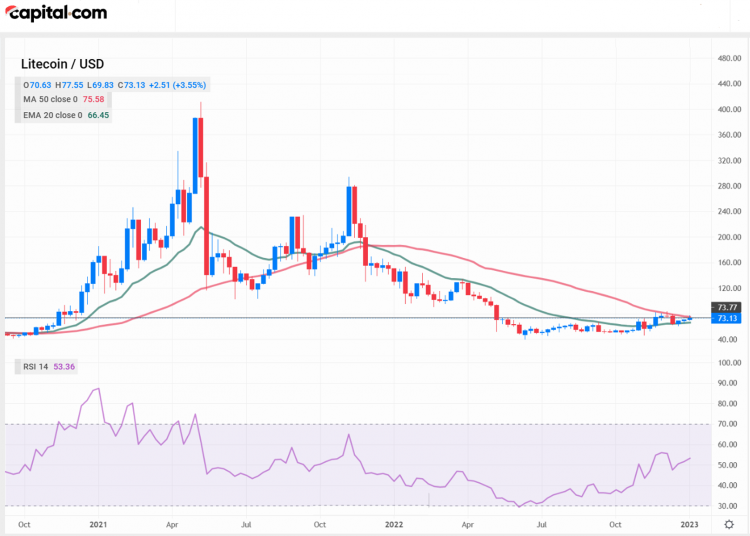 LTC’s price has been sandwiched between the 20-week exponential moving average (EMA) and the 50-week simple moving average (SMA). This indicates a strong tussle between buyers and sellers.

The bulls are buying the dips to the 20-week EMA, but they have not been able to extend the recovery, because the bears are aggressively defending the 50-week SMA. This tight range trading is unlikely to continue for long.

The 20-week EMA has flattened out and the relative strength index (RSI) has risen into positive territory, suggesting that bulls have a slight edge.

If buyers push and sustain the price above the 50-week SMA, the LTC/USD pair could pick up momentum and rally to $100. If this level is also crossed, the next stop could be $133.

This positive view could invalidate in the near term if the price turns down and falls below the 20-week EMA. The pair could then drop to $47. 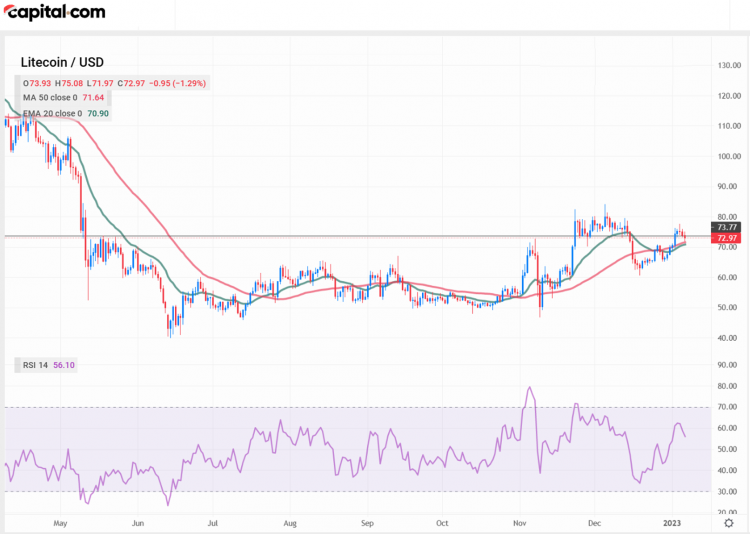 Both moving averages are sloping up and the RSI is in positive territory, indicating that bulls have the upper hand. If Litecoin’s price rebounds off the moving averages, the likelihood of a rally to $84 increases.

This is an important resistance to keep an eye on, because a break above it could signal the start of a new up-move. The pair could then rally to the $100 to $106 zone, as there is no major resistance in between.

Conversely, if the price breaks below the moving averages, it will suggest that bears remain active at higher levels. The pair could then drop to $65, and thereafter to $61. Such a move will tilt the advantage in favour of the bears.

Litecoin: Buy or sell this week?

Litecoin has pulled back to the moving averages. If the price rebounds off the current level, it will suggest that traders are buying the dips. That improves the prospect of a rally to $84. This level may act as a resistance, but if bulls overcome it, litecoin’s price analysis suggests a rally to $100. On the downside, a break below the moving averages could indicate that bears are back in the game. The pair could then slide to $61.

BTC/USD 23391.35
Trade
-0.200%
XRP/USD 0.41105
Trade
-0.540%
ETH/USD 1666.26
Trade
+0.200%
LUNC/USD 0.00019590
Trade
-6.140%
DOGE/USD 0.0957554
Trade
+2.530%
Capital Com is an execution-only service provider. The material provided on this website is for information purposes only and should not be understood as an investment advice. Any opinion that may be provided on this page does not constitute a recommendation by Capital Com or its agents. We do not make any representations or warranty on the accuracy or completeness of the information that is provided on this page. If you rely on the information on this page then you do so entirely on your own risk.