Bitcoin price analysis for January 2021: the end of a bull-run or a new buying opportunity?

Alexandra Pankratyeva
For traders News Cryptocurrencies Bitcoin price analysis for January 2021: the end of a bull-run or a new buying opportunity?
Rate this article
Share Article

Bitcoin has been in a wild run lately, reaching an all-time high of $42,000 and losing $11,000 in just 32 hours. The correction was bound to happen at some point. But what does the latest Bitcoin price crash mean for the crypto market in the weeks ahead? Will the dramatic loss of almost 26 per cent interrupt the impressive rally? Let’s take a closer look at BTC price analysis and answer the question “is Bitcoin still a buy after the sell-off?”

Bitcoin delivered a very happy ending to 2020 for all long-term holders or anyone who jumped into the BTC market during the run-up since October lows. The BTC price drastically accelerated from mid-December, breaking through the $20,000 level, which was a significant barrier, up to the fresh all-time highs in just a couple of weeks.

Bitcoin plunged to around $31,000 in a matter of days, losing 26 per cent of its value and wiping off $150bn from the entire cryptocurrency market.

Is it a new buying opportunity or the start of a bear market? Views differ. 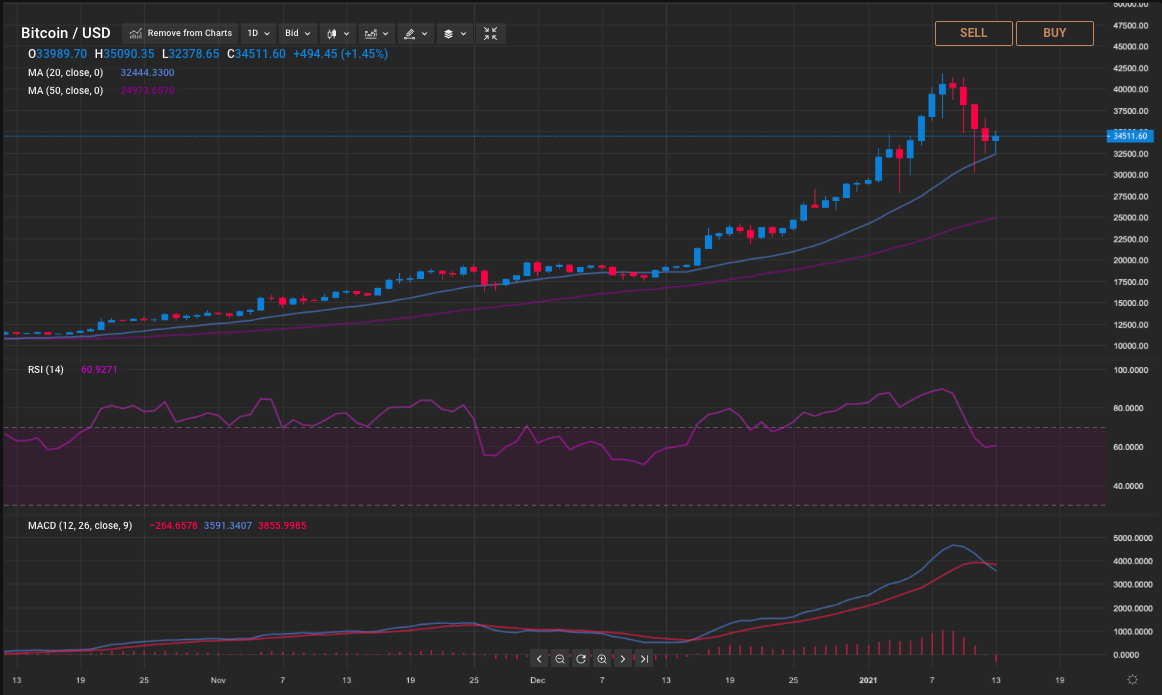 Bitcoin’s latest resurgence has been induced by a number of factors. According to PwC’s global crypto leader Henri Arslanian, the entry of big institutional investors contributed to a record-smashing rally: “When you look at this Bitcoin rally that we have been seeing in the past couple of weeks and months, really, there’s two big elements driving it. One is the continuous entry of institutional players.”

The endorsement of Wall Street billionaires, publicly backing the cryptocurrency, helped to persuade more sceptical mainstream investors to enter the market. Investors such as Stanley Druckenmiller and Paul Tudor Jones both invested in Bitcoin and highlighted its potential as an effective hedge against inflation.

Institutional investors, including MicroStrategy, Square and MassMutual put money into Bitcoin, while PayPal added the ability to buy Bitcoin for millions of its clients worldwide.

Another reason for Bitcoin’s record surge is its potential as a safe-haven asset. JPMorgan analysts likened it to “digital gold” and said Bitcoin could hit $146,000 in the long run.

According to Simons Chen, executive director of investment and trading at Babel Finance, the $40,000 milestone could have been a trigger for profit-taking for investors. “The correction we saw was expected as we believe the BTC price surge recently from under $20,000 to $40,000 in the past four weeks will induce sell pressure,” Chen said.

Recently, the US dollar gained some strength. A return of confidenсe in the US dollar, even a short one, can also put some pressure on assets quoted in USD or against the USD such as Bitcoin, Ethereum and gold.

Giving his comment to CNBC, Jehan Chu, founder of venture capital and trading firm Kenetic Capital, said: “This short term correction is both natural and needed, and is a great entry point for long-term investors as we quickly reach $50k this quarter and $100k by year’s end.”

However, markets don’t go up for ever. There is a view that for now Bitcoin has reached its top.

Has it gone too far? The recent cryptocurrency market performance, in which Bitcoin and Ethereum doubled in price in under a month, can’t be called normal. The all-time high of around $42,000 can be an important short-term top. Still the current price of around $34,500 represents a 290 per cent gain in a period of one year.

The key levels to watch for Bitcoin traders in January 2021:

Trade with the trend or wait for a more stable market

How far could the slide in the crypto market go? Looking at the Bitcoin hourly chart in more detail we can focus on an important trend running from mid-December: the move through $20,000 and its doubling.

If you want to be a buyer now, where would your stop loss go? According to Capital.com’s сhief market strategist David Jones, Bitcoin’s $42,000 level could have been an important top. People got used to Bitcoin going up almost every day, but it eventually changed. There was something of a psychological shock and it may take some time until we see the $42,000 level conquered again.

On the other side, if we look at the Bitcoin price trend, it does just look as a pullback, which could bring some buying opportunities. 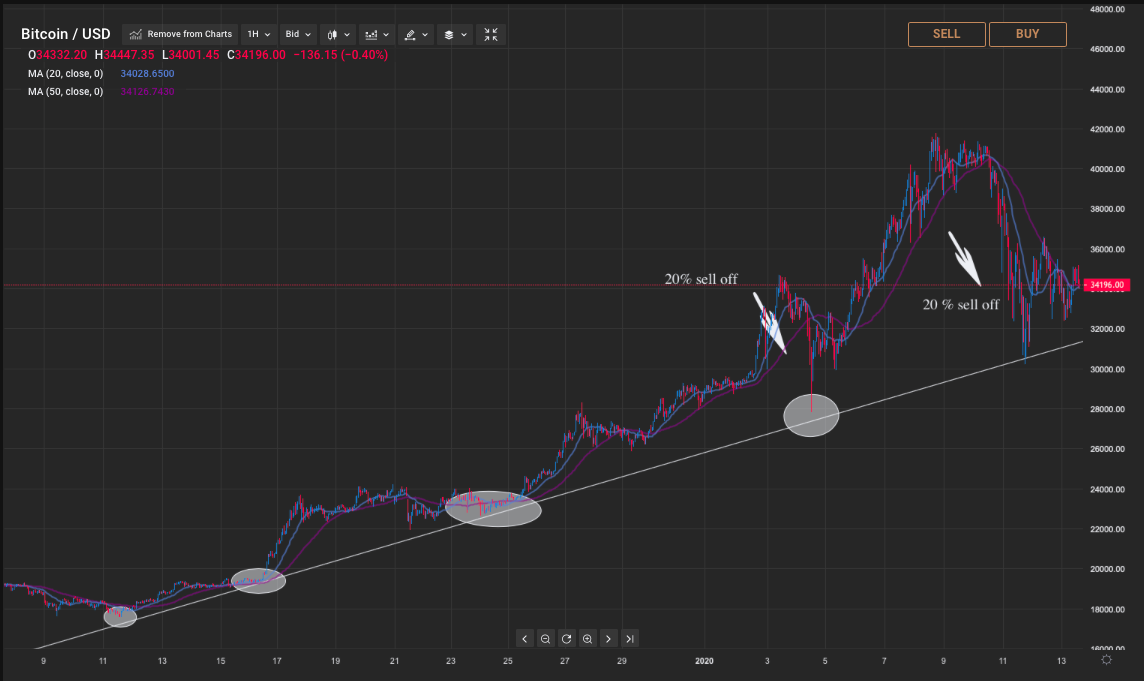 And it is not dissimilar to the most recent sell-off that we have seen from January 8, 2021. It means that the sell-offs of this magnitude are not uncommon in the recent history of Bitcoin trading. So even if the market is sold off, we shouldn’t get too bearish.

If you decide to trade with the trend, a really aggressive trade is to be a buyer with stop loss below $32,000. You can also look up to the $30,000 psychological level as a support area.

In a short video below our chief market strategist David Jones talks about what has been driving Bitcoin so far and gives you good reasons to think if there is a trade for you to do.

According to our latest Bitcoin analysis, even if you are a massive crypto bull, don’t be surprised to see this market come under a bit more pressure. If it stabilises around the current levels ahead of $30,000-$32,000, which is a strong support area, the uptrend could be still intact. But if we lose $30,000 level, there is a risk of a deeper sell-off targeting $28,000 and next to $26,000, where we were at the end of last year.

Let’s see if we have a more stable and relaxed trading from here, or if another blazing surge is underway.

Capital.com Bitcoin price analysis for January 2021: the end of a bull-run or a new buying opportunity?