News and Analysis News Commodities The commodity supercycle is here to stay, these 7 charts show

From oil to grains, from precious metals to industrial materials, the outbreak of the war between Russia and Ukraine is fuelling a rally in all commodity markets, prompting investor anxieties that we may be just at the start of a new commodity supercycle – a prolonged period of price increase in commodity markets.

Prior supercycles in commodities were nearly always preceded by a crisis affecting oil prices, which skyrocketed when tensions, revolutions and wars erupted in major oil- producing countries.

The seven charts below show why, if history is any guide, things now may not be that different from the past.

Commodities had their third best week ever following the Ukraine conflict

The S&P GSCI Global Commodity Index, a benchmark for tracking price evolution in 24 commodity markets, has already been on the ascent since the bottom was reached during the Covid-19 outbreak, but it has been pushed further by the Ukraine crisis.

The index recorded its third-largest weekly gains after the onset conflict between Russia and Ukraine, jumping more than 11% in a single week. 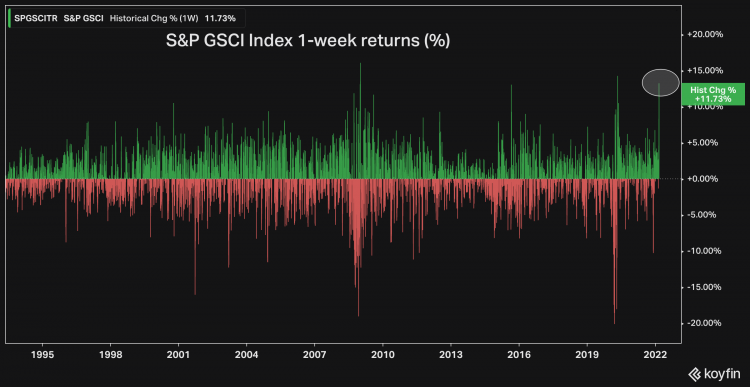 Following the 1973 oil crisis, global commodity prices rallied. This trend persisted through the Iranian revolution in 1979, the Gulf War in the early 1990s and the Iraq War in 2003.

Since the onset of the war between Russia and Ukraine, oil prices have surpassed $110 per barrel, the highest since 2011, and the S&P GSCI index is currently on track to reach the all-time highs seen in 2008. 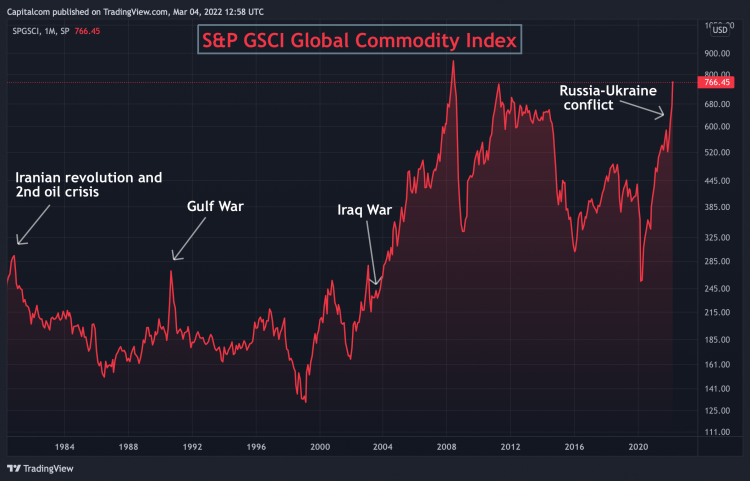 Natural gas in Europe is skyrocketing

At present, 40% of Europe’s natural gas needs are met by Russia, which utilises the Ukrainian pipeline to provide one-third of its supplies.

In essence, the introduction of sanctions that limit the capacity to conduct financial transactions with Russian banking institutions adds further pressure to the European gas market, which was already in dire straits prior to the crisis owing to Europe’s low level of gas reserves.

After the outbreak of the conflict between Russia and Ukraine, the European natural gas benchmark – the Dutch Ttitle Transfer Facility (TTF) – practically skyrocketed to unprecedented highs.

This has the unavoidable consequence of having a knock-on impact on the rise in energy bills that willl confront European consumers in the following months. 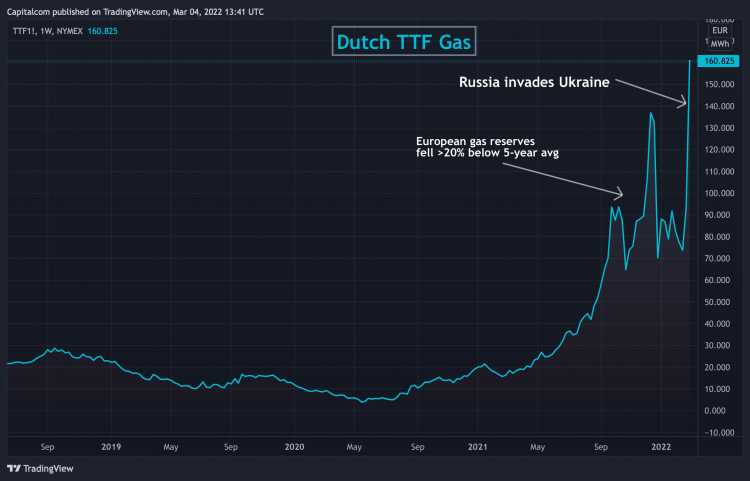 Chicago wheat futures hit an all-time high of $13.5 per bushel as the conflict between Ukraine and Russia exacerbated supply disruptions in the grain market. In addition, London wheat futures (May 2022 delivery) have risen by 25% in a week.

Russia and Ukraine are the world’s third- and ninth-largest wheat producers, respectively, accounting for a third of the total global production. Russia is also the first for exports.

Maersk (MAERSK-B) and MSC (MSM), the world’s largest container ship operator has ceased service to Russian ports, while multinational food corporations Bunge (BG) and the Archer Daniels Midland Company (ADM) have both shut down operations in the area. 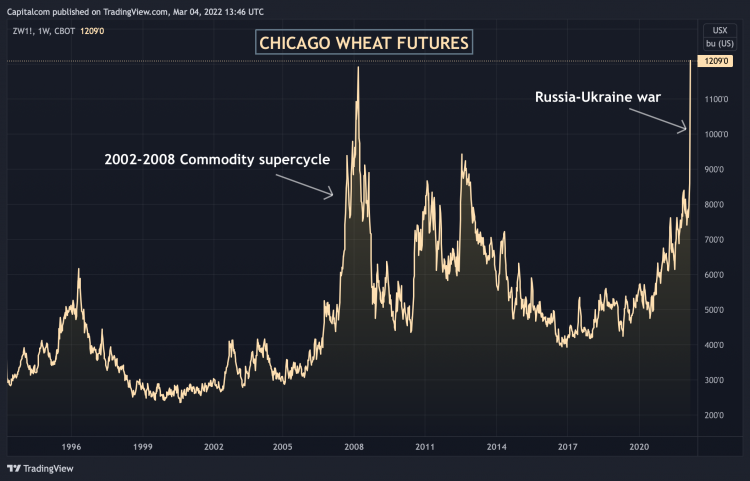 Following the eruption of the war in Ukraine, industrial metals such as aluminium, nickel, copper, iron ore, zinc, palladium and so on have witnessed huge price hikes due to supply disruptions involving key global Russian producers.

Russia accounts for an estimated 10% of the global steel trade; it is the third-biggest producer of nickel; and it is the world's largest producer of palladium, with a 40% share. Its natural gas is also widely utilised in Europe to generate power for energy-intensive smelters. 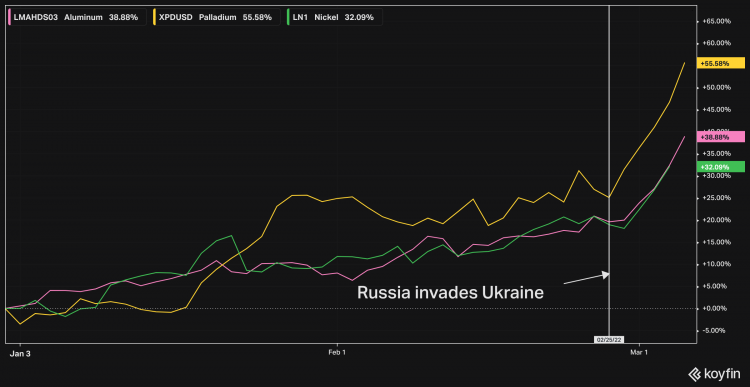 Precious metals, such as gold and silver, despite showing price increases, have underperformed other energy, agricultural and industrial commodities in the week after the outbreak of the war in Ukraine.

However, the expected rise in inflation as a consequence of rising energy costs, as well as the deterioration in market-risk sentiment as a result of the Ukraine conflict's harm to the global economy, may raise investor demand for safe-haven assets such as gold.

Gold has been traditionally seen as an inflation hedge; in the past, its prices have grown in tandem with rises in consumer expectations of inflation measured by University of Michigan. 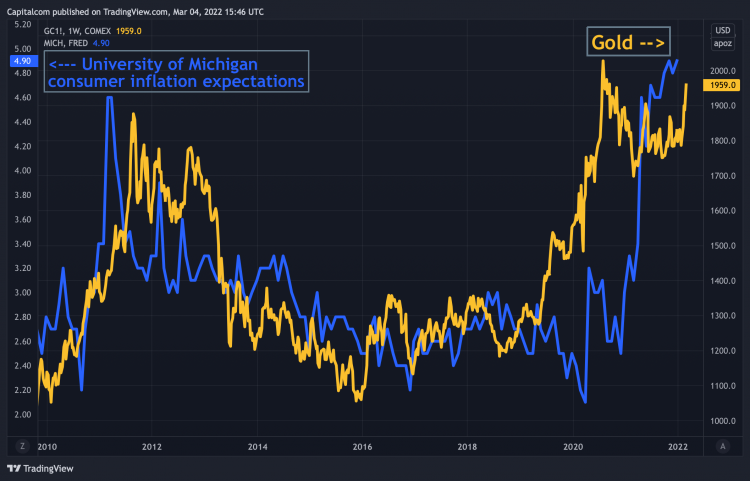 The world is resorting to coal – the dirtiest fossil fuel

Concerns over Russian oil and gas supplies have encouraged countries to resort to cheaper substitutes to fuel their power plants, causing price increases in an already tight coal market.

Newcastle coal futures have more than doubled since the beginning of the year, reaching a record high of $430 per tonne as a result of the Ukraine conflict.

Wasn’t the world supposed to be heading towards decarbonisation? It seems net-zero goals have to wait in view of the present crisis. 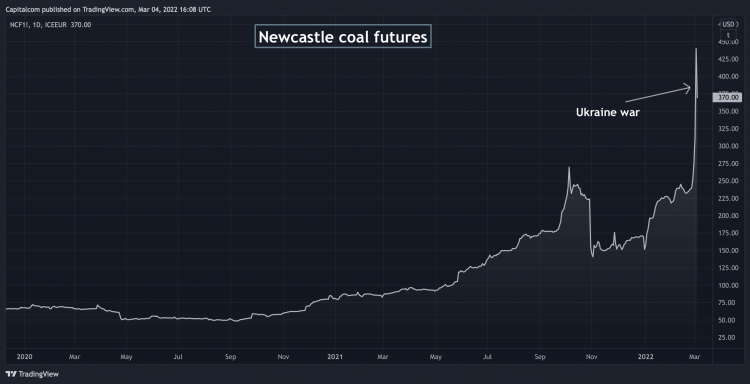 Capital.com The commodity supercycle is here to stay, these 7 charts show