A convergence of geopolitical threats, most notably escalating tensions between Russia and western countries over Ukraine, combined with rising inflationary risks, may be the perfect storm for the beginning of a new gold supercycle.

Almost undetected in the midst of everything that is going on in markets, gold has outperformed the US dollar (DXY), stocks (S&P 500), and the broad crypto market (BTC/USD) since the start of the year.

Gold has surged over $1,900 an ounce, a psychological level not seen since November 2021, driving investor desire for a safe haven from market instability and uncertainty.

Technically, prices may find a major resistance level at $1,920 an ounce, which if breached, may push gold towards $1,960 an ounce. However, momentum indicators are beginning to show signs of exhaustion, indicating the possible emergence of some profit-taking behavior in the near term. 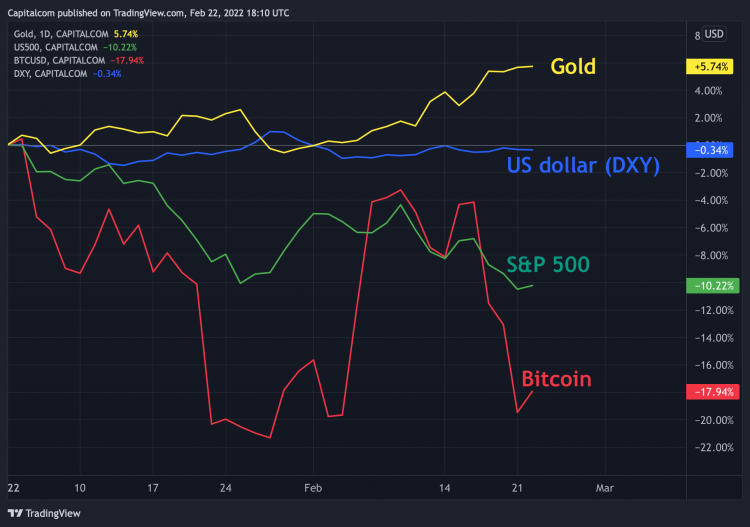 The preconditions for a gold uptrend have been progressively building over the past months. These are the increasing geopolitical risks in Eastern Europe and a chronically high inflation, both of which pose serious threats to the global economy's ability to thrive.

Gold has traditionally shone during periods of economic and geopolitical fears, since it is considered as a hedge to safeguard purchasing power against increased inflation and sluggish economic growth.

This is something that happened in the late 70s when a global oil crisis and the presence of stagflation, generated an unprecedented rally in gold.

Between the summer of 1976 and the fall of 1980, gold prices increased more than sixfold (from $100 to $650 an ounce) while the difference between the US annual inflation rate and the annual rate of economic growth climbed from 0% to about 15%. 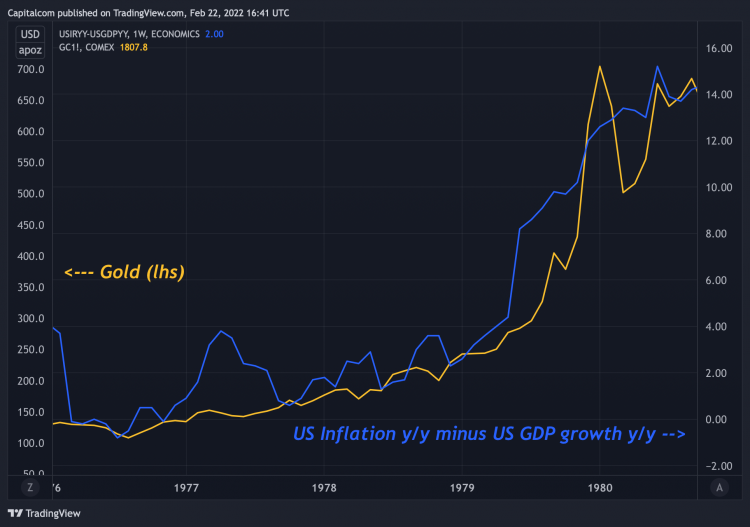 Gold prices were correlated with 1970s stagflation in the US – Credit: Capital.com / Source: Tradingview

Interest rates have historically acted as a deterrent to the appeal of precious metals, since the cost of holding non-yielding assets, such as gold, increases when risk-free assets, such as short-term government bonds, offer better returns.

Despite the fact that monetary policy in the United States is shifting towards a more hawkish stance, as the Federal Reserve announced to begin a rate-hiking cycle, investors are becoming increasingly persuaded that the Fed is now "far behind the curve" of inflation.

Inflation has reached its highest level in more than 40 years, jumping to 7.5% in the US, while interest rates are still at record low levels.

In February 2022, the spread between the inflation rate and the US 2-year yield hit an all-time high of 6%.

This indicates that if the circumstances for a significant and quick reduction in inflation do not occur, interest rates still have a long way to go up before reaching or equalising the level of inflation.

From a macroeconomic perspective, the existence of inflation above interest rates, and the danger that excessive rate hikes may impede economic growth are both supporting factors for gold.

Fed is still way behind the curve of inflation 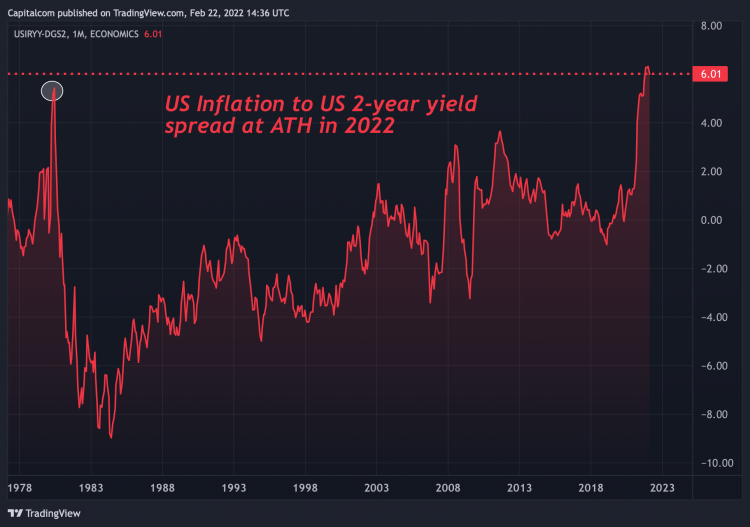 Although some supply-side factors disruptions related with the pandemic, such as freight costs, have lessened in recent weeks, the possibility of witnessing new waves of inflation is still here.

As David Woo, former Head of Macro Research at Bank of America and currently CEO of Davidwoounbound, observed, there is a non-negligible risk to see second-round effects on inflation in 2022.

The unemployment rate in the United States is 4%, and there are more than 11 million job openings, the highest level on record, indicating that the labour market is very tight and the risk of seeing a wage-price spiral increases.

As workers’ negotiating power rises, wage hikes risk eroding business’ margin, forcing them to pass on more price increases to final consumers. This results in a spiral that serves no purpose other than to self-fulfill inflation and hurt real economic growth. 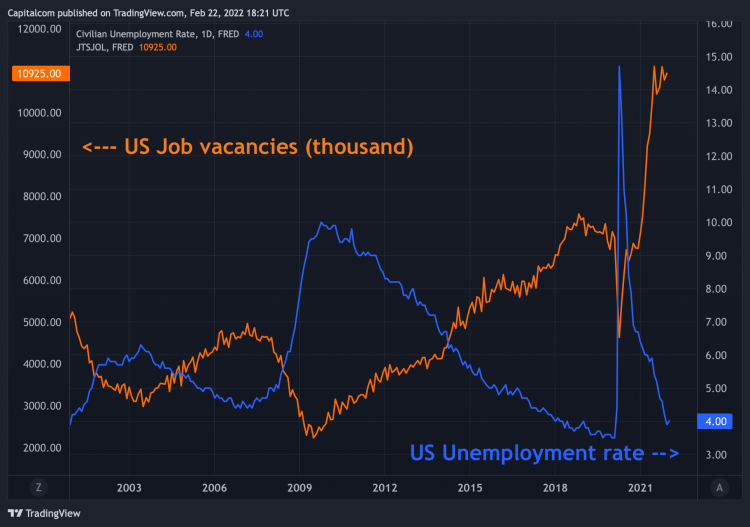 Additionally, there are ongoing geopolitical dangers between Russia, Ukraine, and Western nations, which contribute to support precious metals.

With headlines now following one another and markets becoming more unstable, investor concerns have increased significantly over the last couple of weeks.

And when you live in an environment that is unfriendly to market risk-taking, the demand for safe haven assets such as gold grows substantially.

SPDR Gold Shares (GLD), the largest gold-backed exchange-traded fund (ETF) in the world, experienced positive fund flows in 2022. Since the beginning of the year, GLD has recorded net inflows in dollar terms of $2.64 billion. 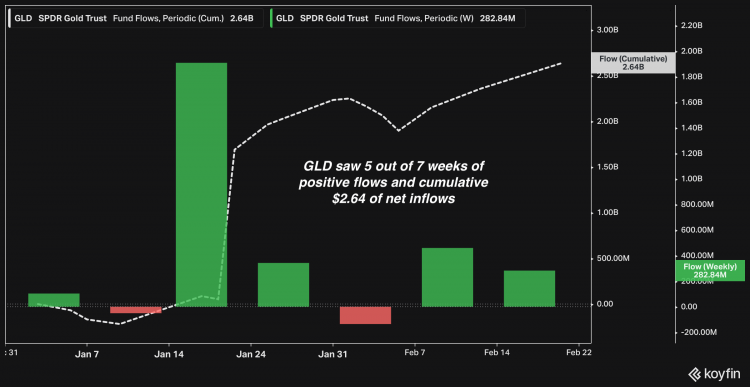 On the daily gold chart, David detected the appearance of a short-term bearish divergence. Since mid-February, the RSI index (10 days) has entered into the overbought territory, but has not made new highs since November, as prices have.

This might indicate that the (short-term) upswing is running out of steam and gold is becoming little overextended, as Jones suggests.

"I would be a little cautious at this level", since $1.920 might represent a major resistance level for the metal, and perhaps we could see some profit-taking there, according to the analyst. 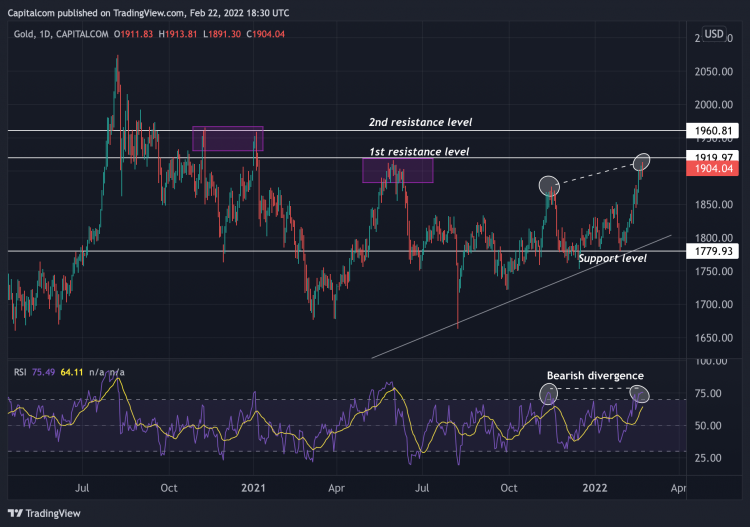 Capital.com Will Ukraine crisis and inflation trigger a gold supercycle?