News and Analysis News Cryptocurrencies What is DEX crypto or decentralised exchange?
Menu

What is DEX crypto exchange? Eliminating the need for an intermediary

How does a decentralised exchange work?

DEX vs CEX: which is better?

What is DEX crypto or decentralised exchange?

The blockchain is a decentralised technology that relies on algorithms and consensus protocols without the need for a central authority to determine if a record is valid or not. The spirit of cryptocurrencies and the blockchain is to promote decentralised transactions that eliminate the middleman in the process of exchanging assets and data.

With that in mind, it may seem counterintuitive that cryptocurrencies have to be traded through centralised exchanges as that goes against the essence of blockchain technology. In response to this contradiction, decentralised crypto exchanges have emerged.

These exchanges represent an environment for peer-to-peer transactions, where digital assets can be exchanged without relying on the services of a third party who will ultimately have some degree of control over digital assets and data.

What is DEX crypto exchange? Eliminating the need for an intermediary

A decentralised exchange, also known as DEX crypto exchange, is a platform whose back-end is designed on top of an existing blockchain infrastructure, and all transactions made through the exchange are recorded in it for transparency and safety.

These exchanges rely on smart contracts and on-chain data to facilitate peer-to-peer transactions through which digital assets can be passed from one wallet to another.

In the case of DEX crypto exchanges, no central server holds the data of the users who are exchanging assets, which mitigates the risk of data being stolen or accessed without authorisation by a third party.

As a result, users who trade assets through a DEX remain anonymous, as all transactions are encrypted and the identity of those who participate is reduced to their wallet number.

Transactions can be completed without incurring additional costs as no intermediary stands to make money out of the operation. This means that DEXs can offer lower costs for executing transactions than their centralised CEX peers. Still, CEX fees could be more efficient than DEX’s overall. This is because users’ funds are kept in a CEX wallet, enabling users to exchange them without incurring blockchain costs. This is in contrast to DEX, where swapping fees for small volumes can become high.

Nevertheless, decentralised exchanges face some hurdles which impede their widespread adoption. They are considered less scalable, because DEXs function using smart contracts that live on blockchains and are bound by the limits of their underlying infrastructure.

Moreover, they require more sophisticated knowledge from crypto newbies to start trading. In the absence of intermediaries, traders get full custody of their own crypto assets and are responsible for managing their private keys and wallets. Although this may be considered as a benefit, it also comes with a risk that your keys can be lost or stolen.

The lack of an intermediary also means that the exchange does not have to adhere to know-your-customer (KYC) or anti-money-laundering (AML) standards, which add another layer of security and trustworthiness to the crypto exchange.

How does a decentralised exchange work?

Most decentralised exchanges nowadays work following an Automated Market Maker (AMM) protocol. This is a type of DEX protocol which relies on a mathematical formula to set prices. Instead of an order book as used by traditional exchanges, asset prices on DEX are set according to a pricing algorithm.

Decentralised exchanges are designed to perform this same task but without having to hold the assets themselves. Instead, these exchanges create pools of different tokens that are regularly traded through their platforms. Those tokens come from investors who are willing to provide them in exchange for a fee.

The algorithm that regulates the decentralised exchange will price the assets according to supply and demand dynamics, and fees paid for pooling different tokens are adjusted based on those dynamics as well. 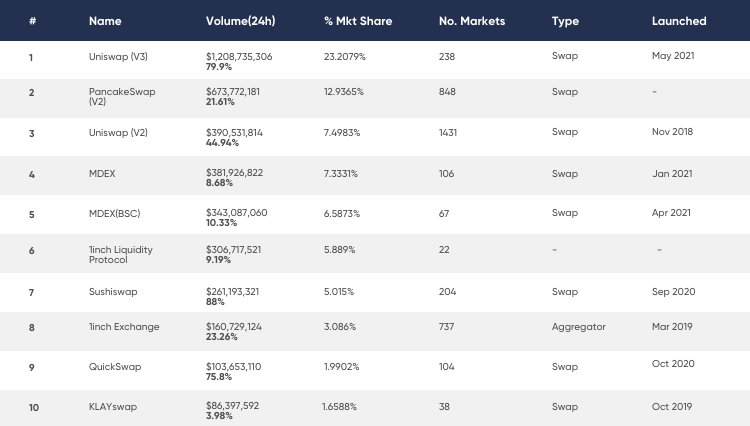 Working in parallel for years, centralised and decentralised exchanges have some fundamental differences. The following is a summary of the most important differences between DEXs and CEXs. 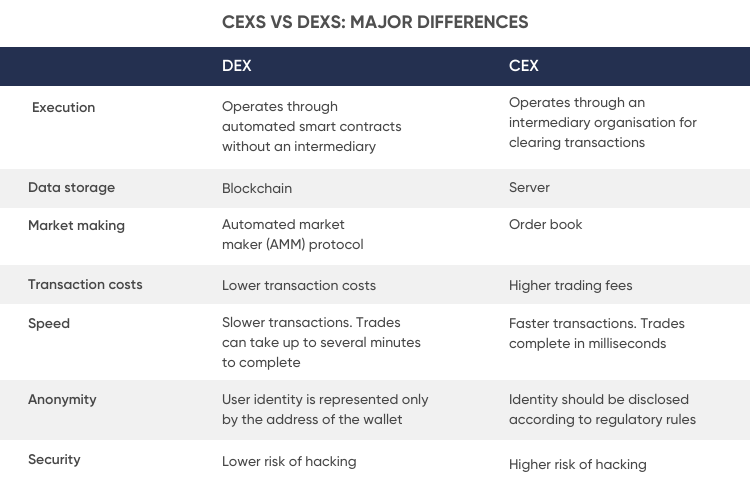 DEX vs CEX: which is better?

Can DEXs overtake CEXs, or are intermediaries still necessary in the crypto world to ensure that transactions can be transparently and accurately performed?

This is an ongoing debate and if you are interested in learning more about this technology you should read up on decentralised finance, also known as DeFi, and the protocols and systems that power this growing segment of the crypto market. According to CoinGecko's Q1 2021 cryptocurrency report, DEXs dominated half of the DeFi ecosystem. 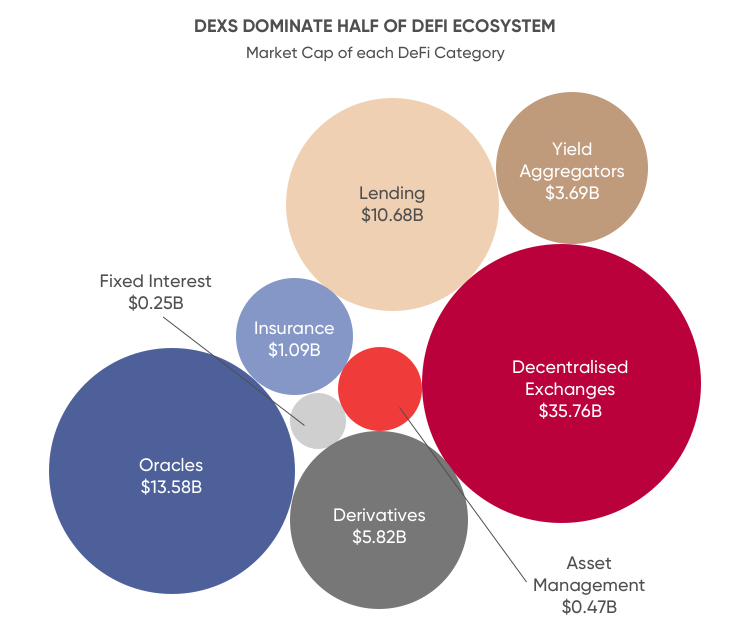 Sharing his view on the topic, Mikhail Karkhalev, market analyst at Capital.com, said:

“There are no particular advantages of decentralised exchanges over centralised ones. In the worst-case scenario, both DEX and CEX can be hacked, or founders can disappear with clients' money. On the bright side, CEX outperforms DEX in the ability to work with fiat currencies and is considered more intuitive. DEX, due to its decentralised nature, can give anyone the ability to launch their own token whenever they want. That is, on DEX, you can work with an unlimited number of assets, which increases the chances for making profit.

Simply put, DEXs and CEXs each have their own audience. However, DEX and the DeFi sector seem to be the future”.

What is staking crypto? A closer look at the rise of PoS

How to invest in cryptocurrency in India: A step-by-step guide

Best crypto for beginners: How to choose the right coin

Capital.com What is DEX crypto or decentralised exchange?