What is a centralised exchange (CEX) and how does it work?

With the introduction of the blockchain, a technology that is considered decentralised by nature, a new model has emerged for organisations that function as intermediaries for buyers and sellers – that is, cryptocurrency exchanges.

Since the inception of cryptocurrencies, cryptocurrency exchanges have typically been centralised, which means that all the transactions need to flow through their systems and infrastructure to be completed.

In the following article, we’ll explain everything you need to know about CEXs (centralised exchanges), including how they work and what makes them different from DEXs.

What is a centralised exchange (CEX)?

A centralised cryptocurrency exchange is in essence a platform through which parties can safely exchange digital assets.

These exchanges provide an environment where buyers and sellers can quickly make transactions. They also act as liquidity providers for the tokens they support by taking the role of market makers.

All of the transactions made within these exchanges are completed electronically and are recorded in the corresponding blockchain that powers the particular digital assets being exchanged.

These exchanges effectively decide which tokens can be traded as all crypto assets must be vetted before being listed. They also provide access to transaction-related data for investors and other parties to analyse, along with other CEX services.

By using the blockchain, CEX crypto exchanges have removed the need for an intermediary broker. This is because all transactions are settled directly within the exchange via its own interface.

How does a centralised exchange (CEX) work?

Centralised exchanges that support digital assets receive orders from individual or institutional clients and they typically match buy and sell orders that have the same price. On the other hand, they may also act as market makers by providing liquidity to the tokens supported by their platforms to improve execution speeds.

Since these exchanges manage all the data from the orders being placed, they can also make that information available to market participants for analysis. Commonly the exchange receives a fee for granting access to this data.

Additionally, they enable developers to list their project’s tokens subject to the assets passing a vetting process.

Crypto CEXs provide a layer of decentralisation because users don’t necessarily have to go to a broker to place an order. Instead, their assets are held in a wallet and they are free to move those assets to the exchange at any point when they want to trade them. 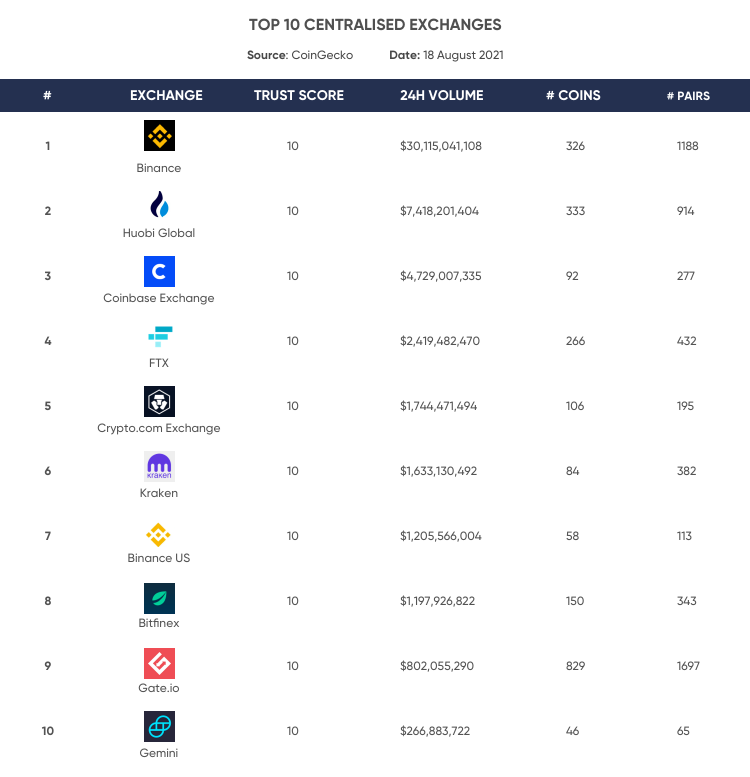 A very important characteristic of centralised exchanges is regulation. Since these institutions deal with billions of dollars and serve millions of customers from different corners of the world, they typically have to be authorised to provide their services by the local governments of the countries in which they operate.

These exchanges also have to comply with multiple laws and regulations, including Know Your Customer (KYC), anti-money laundering (AML), and counter-terrorism financing (CFT) protocols. Also, they are obligated to guarantee that all operations are executed transparently and promptly by following certain procedures that prevent market participants from distorting asset prices.

According to a report by Gemini, as of September 2020, 95% of the trading volumes for digital assets were processed by a centralised exchange. More recent data, provided by the Block, suggests that in August 2021 DEX to CEX spot trade volume accounted for 8.11%. That figure indicates that CEXs still account for 91.8% of the crypto market trading volume.

Decentralised exchanges in the cryptocurrency space have emerged as part of the decentralised finance (DeFi) movement. Unlike CEXs, decentralised exchanges are peer-to-peer marketplaces, with no central authority involved. They do not store the users data on their servers, transactions are executed automatically via blockchain, and their services do not require compliance with the regulatory standards. It makes them a potentially cheaper solution as CEXs usually charge a higher fee for their services.

Another way in which CEX and DEX differ substantially is that decentralised exchanges use smart contracts and sophisticated market-making protocols to guarantee that there will be enough liquidity, so all orders are executed and filled promptly. One example of such a protocol is Automated Market Maker (AMM). Instead of using a traditional order book, as is the case on centralised exchanges, asset prices on DEXs are defined according to a pricing algorithm.

Here’s a summary of the key differences between the two types of exchanges: 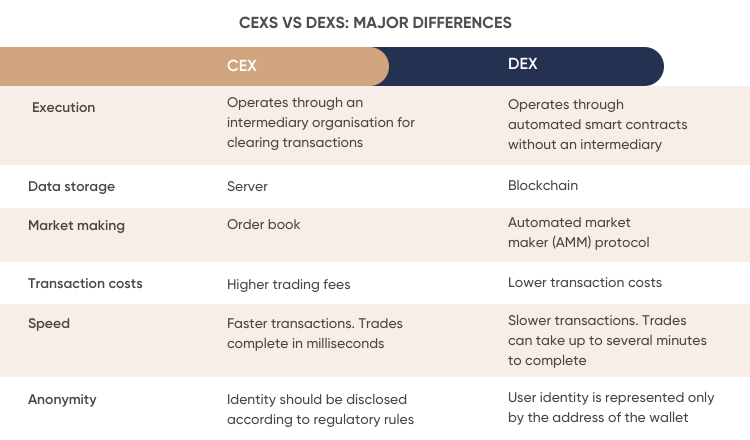 CEX vs. DEX: which one is better?

Now that you know the differences between CEXs and DEXs, you are probably wondering which one is better. The truth is that each has its advantages and disadvantages.

On the one hand, centralised exchanges are regulated entities that offer a higher degree of safety and transparency as they need to operate within the boundaries of strict laws that seek to protect investors and all other parties involved. The speed of execution is also typically higher for CEXs, and liquidity is provided by market makers to make sure that all instruments can be easily exchanged.

On the other hand, decentralised exchanges offer cheaper fees, anonymity for those involved, and direct access to relevant transaction data via the blockchain.

You should pick which type of exchange suits you the best depending on which factors are most important to you.

“DEXs and CEXs each have their own audience. DEX and the DeFi sector seem to be the future, however.”