Is Upstart a good stock to buy?

Upstart’s platform uses machine learning to identify risk. It aims to improve access to affordable credit for borrowers while reducing the risk and cost of lending for its bank partners.

In April, CEO Dave Girouard made the news as he sold off Upstart shares. The stock price was almost halved by disappointing first-quarter results released on 9 May. Amid a more hostile macroeconomic climate, what’s next for the Upstart Holdings (UPST) stock forecast?

The price grew over the course of the spring and entered a bull run in late June 2021, when it rose from around $120 to an all-time high of $390 on 15 October. The stock was bolstered over this period by several banks launching personal loans platforms powered by Upstart, and the strong second-quarter results announced on 10 August 2021.

The stock entered a bear run in November 2021, triggered by mixed third-quarter results. Though headlines were good, investors were disappointed by revenue guidance issued for the quarter ahead. 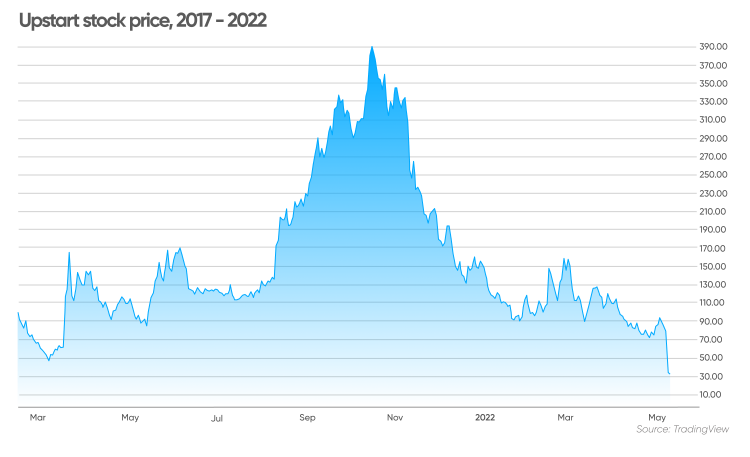 February 2022 saw Upstart announce fourth-quarter and full-year results, and a share buyback programme. The market reacted favourably to the news and the share price jumped from $104.60 to $148.60 by day’s end on 16 February.

But these gains were short-lived. The share price dipped again, and tumbled in April when US Securities and Exchange Commission (SEC) filings revealed that CEO Dave Girouard had sold a significant amount of Upstart shares. Investors took flight, fearing bad news lay ahead, and the share price fell by almost 25% in the week following the news.

Disappointing first-quarter results released on 9 May did little to reassure investors, and the price plunged 46% in after-hours trading. In an earnings call, Girouard acknowledged the challenging macroeconomic climate facing the company, stating that “it’s become apparent that 2022 is shaping up to be a challenging one for the economy and for the financial services industry in particular”.

In terms of technical analysis for Upstart stock at the time of writing (12 May), the relative strength index (RSI) reading was 25.72, signifying that the stock was in oversold territory. The stock was trading significantly below its 10 and 20-day moving averages ($77.13 and $79, respectively), signalling a bear trend.

Upstart announced first quarter results on 9 May. Headlines were positive, but investors were disappointed by gloomy full-year guidance.

Earnings per share (EPS) of $0.61 represented a 122% increase on the prior-year quarter. According to data from MarketBeat, his figure beat analyst expectations by $0.08.

These lower projections were driven by an increasingly hostile lending outlook. High US inflation is increasing the cost of living and this looks set to be coupled with sustained interest rate hikes. This combination could leave Upstart’s (UPST) customers struggling to meet repayments.

In the May earnings call, Girouard also warned that increased risk in the economy was raising loan prices on the platform and lowering demand.

“In addition to increasing rates for approved borrowers, this also has the effect of lowering approval rates for applicants on the margin. Given the hawkish signals from the Fed, we anticipate prices will move even higher later this year, which would have the effect of reducing our transaction volume, all else being equal,” he added.

And amid this challenging climate, CEO Girouard has sold a significant number of Upstart shares. The most recent transaction was announced in a SEC filing in April 2022, and was followed by a share price tumble of 25%.

What is your sentiment on UPST?

Give UPST a try

Investors can be spooked when executives sell shares in their company, fearing that it spells bad news ahead. What’s more, Girouard’s sell off came shortly weeks after an ambitious share buyback programme was announced – something that regulators have taken a dim view of.

In 2019, SEC Commissioner Robert Jackson was extremely critical of companies that announce buybacks at the same time as executives sell shares, stating: “When executives unload significant amounts of stock upon announcing a buyback, they often benefit from short-term price pops at the expense of long-term investors.”

His research into the relationship between stock buybacks and stock cashouts also found that “insider selling on buybacks is associated with worse long-term performance”.

Despite this, there are many mundane motivations for executives to sell shares, such as portfolio diversification. It is worth noting that Girouard did not address the transactions in the recent earnings call, but seemed at pains to stress his commitment to Upstart.

He stated: “I’m far too excited about — and paranoid about — the future to spend too much time toasting to our success in the past… At the same time, we have to pair this urgency about the present with optimism and absolute determination about the future.”

As of 11 May 2022, analysts rated Upstart stock a consensus ‘hold’. According to data from MarketBeat, Upstart stock had three ‘buy’ recommendations, eight ‘hold’ and two ‘sell’..

Is Upstart a good stock to buy?

First-quarter results triggered a flurry of bearish analyst activity. On 11 May, Barclays downgraded the stock from ‘overweight’ to ‘equal weight’, while Atlantic Securities cut its price target from $245 to $45.

On 10 May, analysts at both Goldman Sachs and Bank of America downgraded UPST shares from a ‘buy’ to ‘neutral’ rating. On the same day, Wedbush’s Chiaverini halved their Upstart stock price target from $70 to $35.

Piper Sandler downgraded Upstart stock to a ‘neutral’ rating on 10 May and cut their price target from $230 to $44. This was an 81% decrease, representing a bearish 42.95% downside on the report date share price.

It’s worth noting that analysts’ predictions are frequently wrong and forecasts are no substitute for your own research. Always perform your own due diligence before investing. And never invest or trade money you can’t afford to lose.

Looking to the longer term, algorithm-based forecasting service Wallet Investor rated UPST an “awesome long-term investment” at the time of writing (11 May).

Note that algorithm-based price predictions can be wrong. Forecasts shouldn’t be used as a substitute for your own research. Always conduct your own due diligence before investing. And never invest or trade money you cannot afford to lose.