There are now more than 3000 cryptocurrencies in existence, with each falling into one of the three major categories: altcoins, tokens, and Bitcoin.

In this article, we will explain the differences between these cryptocurrencies. We will also look at some of the common subtypes used for cryptocurrencies, such as ‘stablecoins’ and ‘privacy coins’.

After reading this, you should have a good understanding of all the major  types of crypto and be able to differentiate between them easily. Let’s get started!

The three main types of cryptocurrency

Bitcoin (BTC) was the first cryptocurrency to be created and remains the world’s leading cryptocurrency by market cap. Bitcoin is a global peer-to-peer electronic payment system that allows parties to transact directly with each other without the need for an intermediary such as a bank.

The Bitcoin whitepaper, which outlined how this revolutionary new currency would work, was released in 2008, and the Bitcoin network launched in 2009. Since its launch Bitcoin has experienced no downtime, allowing anyone to transfer value at any time and from anywhere. 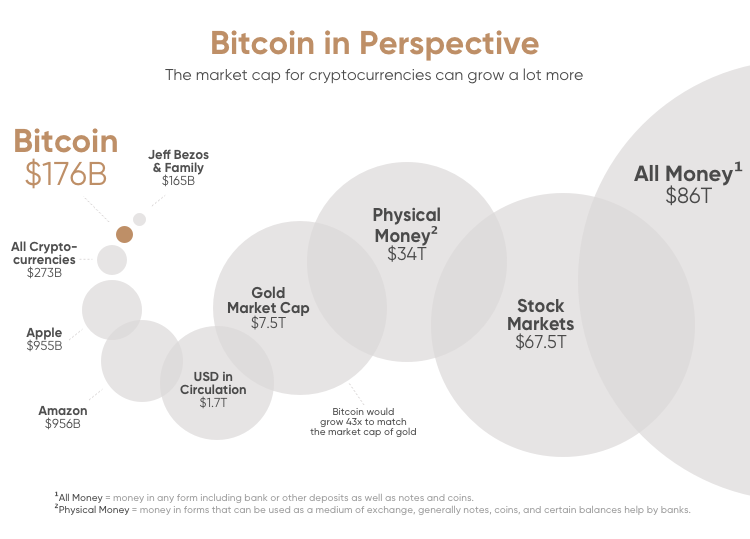 Bitcoin’s creator goes by the pseudonym Satoshi Nakamoto, their real identity remains unknown to this day. It is also unclear whether Nakamoto represents a single person or a group of individuals who worked on the Bitcoin project.

Bitcoin is often regarded as the digital alternative to both fiat currencies and gold. That is because Bitcoin can be spent and saved just like traditional money, but is also a scarce finite resource and thus good store of value like gold.

The release of Bitcoin and its open-source code in 2008 paved the way for thousands of other cryptocurrencies to be created. These new coins have been dubbed ‘alternative coins’ or ‘altcoins’ as they are alternatives to Bitcoin.

While some do serve a similar purpose to Bitcoin, other cryptocurrency types  such as altcoins actually encompass a wide range of different uses. For example, Ethereum (ETH), the world’s first programmable blockchain, enables developers to build and deploy decentralised applications (DApps) and smart contracts.

IOTA is specifically designed to be a new data transfer and transaction settlement layer for the machine economy and the Internet of Things (IoT).

Litecoin (LTC) is a peer-to-peer currency and global payment network similar to Bitcoin. In fact, Litecoin’s creator Charlie Lee states that his intention was for Litecoin to be a complementary cryptocurrency to Bitcoin.

Like Bitcoin, all altcoins are able to operate independently on their own networks utilising distributed ledger technology (DLT). The most famous and commonly used type of DLT is blockchain technology, which was introduced to the world by Satoshi Nakamoto via Bitcoin. While all coins use DLT, variations in the underlying code of each protocol are what gives altcoins their own unique attributes.

There are at least 856 altcoins in existence according to data from CoinMarketCap, and the top 5 altcoins by market cap are Ethereum, Ripple (XRP), Bitcoin Cash (BCH), Litecoin, and EOS.IO (EOS).

Unlike Bitcoin and Altcoins, tokens are not able to operate independently and are dependent on the network of another cryptocurrency. That means they do not have their own underlying DLT or blockchain, but instead, are built on top of an existing cryptocurrency’s blockchain.

Data from CoinMarketCap shows that there are at least 1496 tokens in existence, which are deployed on the blockchain platforms of 24 cryptocurrencies. Some prominent examples of different types of cryptocurrencies that host tokens include:

The top 5 tokens by market cap are Tether, UNUS SED LEO, Chainlink, Huobi Token, and Maker, all of which are deployed on the Ethereum blockchain apart from Tether which takes the top spot.

Tokens are much easier to create as you do not need to build a blockchain from scratch. You may have heard the phrase “tokenise the world,” which refers to the ability for tokens to represent almost any asset.

This is thanks to the use of smart contracts, and we have already seen tokenised versions of stocks, commodities, fiat currencies, other cryptocurrencies, property, and more. And the chances are, we have barely even scratched the surface yet as to what else can be tokenised.

While we are on the topic of different types of cryptocurrency, we may as well look at some of the various subtypes that you will likely come across in the crypto world.

Here are four terms commonly used to categorise cryptocurrencies that have specific characteristics: 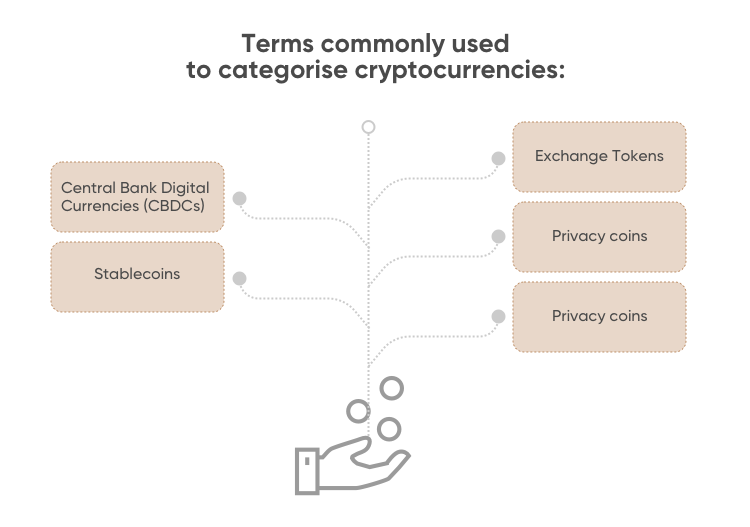