The Turkish government under President Recep Tayyip Erdoğan has refused to abandon a low interest rate economic model despite the pace of price rises hitting a 24-year high of above 83%.

While private consumption remained the main driver for economic growth in the first half of 2022, soaring inflation would take a toll on consumer spending the remainder of the year. A survey by Yöneylem Social Research Center in July to August 2022 showed that 69.3% of participants said they were struggling to pay for food.

Is a recession in Turkey imminent as soaring inflation is set to hurt consumer spending, the economy’s main growth engine?

Recession is generally defined as a time when economic activity is down. The general consensus is that a recession starts when a nation’s gross domestic products (GDP) declines significantly for two consecutive quarters.

According to the International Monetary Fund (IMF), recessions have several common characteristics:

What is your sentiment on USD/TRY?

Give USD/TRY a try

Data from the Turkish Statistical Institute showed recession in Turkey started in the third quarter of 2018, although the economy still grew by 2.3%. The country’s economy plunged into negative growth for the next three quarters until the second quarter of 2019.

Entering 2022, the economy started to cool on external headwinds. These included rising commodity prices triggered by the war in Ukraine and the tightening cycle by central banks, which started to dent growth.

However, strong growth was still recorded compared to other developed nations. In April to June 2022 period, Turkey’s economy grew stronger than expected at 7.6%, despite soaring inflation and the weakening lira. It grew by 7.5% in Q1, according to data from the Turkish Statistical Institute. 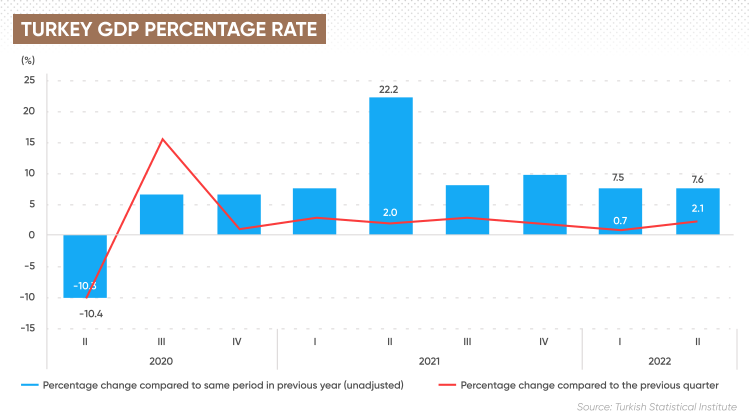 Private consumption had been the main driver in Q2, growing at 22.5% year-on-year (YOY), followed by exports which increased by 16.5%.

“This shows a continuation of robust household consumption driven by negative real rates, leading to fewer savings and supporting the consumption appetite.

“However, we see momentum loss in activity in the second half of this year on the back of deteriorating purchasing power, concerns about policy sustainability, as well as a less supportive global backdrop with tightening global central bank policies and elevated geopolitical risks.”

While not mentioning recession, global investment bank J.P. Morgan forecast Turkey’s economy could contract 2% in the third quarter and zero growth in the final quarter of 2022.

While the current crisis in Turkey is caused by multiple domestic factors, some are the legacy from 2018 to 2019. 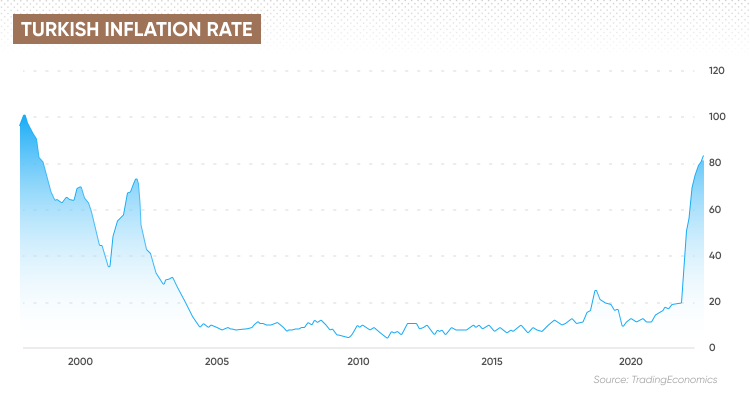 For years, Turkey has struggled with inflationary pressure. However, due to stubbornly high energy costs, supply shocks to food and agricultural commodity prices, economic inflation reached new highs in 2022.

In its inflation report on 27 October, the Central Bank of the Republic of Türkiye (CBRT) revised up its inflation projections for 2022 to 2023.

Despite the runaway inflation in Turkey, the central bank has continued its low interest rate policy.

In a statement on 27 October, the bank argued lower interest rate cuts were important to preserve the growth momentum in industrial production and the positive trend in employment amid increasing uncertainties with global growth and further escalation of geopolitical risks.

At the same time, other central banks are taking the opposite approach to taming inflation.

According to ING's Mercan, the existing loose monetary policy will do little to address inflationary pressures.

“The current policy setting does not prioritise disinflation and inflation will likely remain elevated in the near term,” Mercan said on 22 September.

CBRT’s rate cut has put downward pressure on the country’s currency, the Turkish lira (TRY) amid a strengthening US dollar.

As of 1 November, the USD/TRY rate had surged more than 94% to 18.6, from just 3.77 in November 2017, according to data aggregator TradingEconomics. The pair denotes how many Turkish liras (the quoted currency) are required to purchase one US dollar (the base currency).

A weaker lira would inflate Turkey’s import bills of commodities which are priced in US dollars, making imported goods more expensive in the domestic market. Turkey is a net oil and gas importer with domestic production only meeting 7% of its consumption, according to the US International Trade Administration.

Turkey economic forecast for 2022 and beyond

“Economic activity is expected to weaken in the second half of 2022, as macroeconomic volatility intensifies, inflation erodes the purchasing power of households that can no longer front load consumption, and external demand weakens.”

In September, Fitch Ratings revised its forecast for Turkey’s GDP for 2022 to 5.2%, compared to 4.5% in its June’s forecast, on the back of stronger growth in the second quarter. Turkey’s economic growth was expected to slow to 2.9% in 2023 and remain at the same level in 2024.

Data aggregator TradingEconomics forecast Turkey’s GDP growth could reach 5.10% by the end of 2022, before slowing to 3.2% in 2023, based on its econometric models. The service projected the economy to rebound to 4.5% growth in 2024.

Analysts mentioned in this article expected Turkey’s economy to weaken in the final quarter of 2022 and in 2023. According to Morgan and ING Group, the economy may contract briefly in the third or fourth quarters of 2022, indicating a possible recession in Turkey, before recovering to positive growth in the first quarter of 2023.

However, if you're looking for a Turkey recession forecast, keep in mind that a recession is caused by a number of complex factors, making it difficult for analysts to make accurate long-term projections. Analysts’ predictions can be wrong.

Before trading or investing, you should always do your own research. Keep in mind that past performance is not a reliable predictor of future outcomes. Also, never trade with money you can't afford to lose.