Interest rates in Turkey have continued to fall despite massive inflation pointing it in the opposite direction.

With another cut announced in November ahead of an election next year, will the Turkey interest rate forecast for the next 5 years point to low rates and high prices?

What are interest rates and how are they set in Turkey?

Interest rates are effectively a charge on borrowing and reward for lending. They are a percentage, or rate, of interest set by lending authorities as a way to manage the economy, and account for things like inflation and the value of money.

Central banks set a base interest rate which filters through to rates offered by commercial banks, affecting the cost of repaying loans and mortgages, as well as the interest returned to people who deposit their cash in a bank.

Central banks tend to set interest rates in response to inflation. When inflation is higher than the bank’s target, rates are hiked to increase the price of borrowing and the appeal of saving, bringing down demand, and, accordingly, prices. The opposite happens when inflation is too low, or if it is in a satisfactory range and the bank intends to stimulate growth.

In Turkey, interest rates are nominally set by the Central Bank of Turkey (CBT), which is meant to operate independently of Government fiscal policy and work towards an inflation target of 5%.

However, monetary policy has increasingly come under the control of Turkey’s president Recep Tayyip Erdoğan, who is prioritising economic growth over price stability before an election in 2023. Erdoğan’s monetary policy in recent years has made a mockery of the bank’s 5% target.

What is your sentiment on USD/TRY?

Give USD/TRY a try

Turkey interest rates come from a legacy of huge volatility, before a period of relative stability through most of the 21st century, as the CBT made extensive structural changes following the economic crisis of 2001 triggered by a banking collapse.

Between 2005 and 2017, Turkey was largely able to keep inflation below 10%, with interest rates following suit by staying relatively low. In 2013, rates went as low as 4.5% as the country aligned itself closer to the Western economic model of slow price growth after the Great Recession. 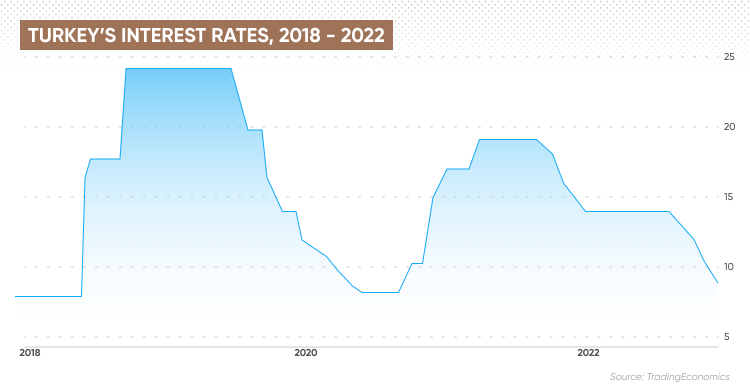 Rates rose as high as 20.35% in 2019 in response to a sharp rise in inflation, before tumbling on the appointment of a new central bank chief. Rates fell to 8.25%, in part as a response to demand-choking Covid-19 restrictions, before rising to 19% by March 2021.

That hike was followed a few days later by Erdoğan sacking Naci Agbal from his post as governor of the Central Bank of the Republic of Turkey. The rate has continued to fall since, under pressure from the president. It now sits at 9%, despite soaring prices.

It can be confusing to discuss the factors driving interest rates in Turkey because they consistently appear to defy logic and the actions taken by comparable nations.

Like much of the world, the country has been hit by tight supply chains following the lifting of restrictions linked to Covid-19, and the impact on energy and food prices of Russia’s invasion of Ukraine.

That has been compounded by the country’s currency weakening this year. The Turkish lira has lost about 28% of its value against the dollar since January. While most countries have seen their currency fall against the greenback, which as a safe-haven asset is popular with investors in a bearish environment, a limited response by Turkey’s central bank and hawkishness from the US Federal Reserve (Fed) has made that disparity wider.

A weak currency has shot up the price of imports for Turkish citizens, putting more pressure on prices. Turkey has run a trade deficit in the last two years, emphasising the pain caused by higher import prices. There may be some benefit to the country in the shape of rising exports from a weakened lira, though not if it drives up competition, and accordingly prices, for goods domestically.

Yet through this, the response from the CBT has been the opposite of convention, and consistently trumped experts’ Turkey interest rate predictions.

The bank’s one-week repo rate has halved since September last year when inflation was a relatively mild 19.6%. Rates began 2022 at 14%, but under increasing pressure from President Erdoğan, that has continued to tumble as inflation picks up.

Its latest cut in November, from 10.5% to 9%, was attributed by the bank to the growing risk of a recession, seemingly disregarding the fact that inflation was way outside the CBT’s target.

“The effects of slowing foreign demand on aggregate demand conditions and production are closely monitored,” the CBT said at its latest monetary policy committee meeting in late November.

“It is critically important that financial conditions remain supportive for the sustainability of structural gains in supply and investment capacity by preserving the growth momentum in industrial production and the positive trend in employment in a period of increasing uncertainties regarding global growth as well as further escalation of geopolitical risks.

“Considering the increasing risks regarding global demand, the Committee evaluated that the current policy rate is adequate and decided to end the rate cut cycle that started in August.”

ING said the bank was likely to pursue accommodative “macro-prudential” measures as a result of lowering rates again.

“This trend, alongside Turkey’s short-term external debt in excess of US$ 180 billion, remains a significant concern and threat to macroeconomic stability, particularly as 29 the depletion of reserves – which currently stand at around US$15 billion on a net basis, but are heavily negative if swaps with commercial banks are excluded – mean that the country has few buffers to deal with a potential crisis,” wrote the European Reconstruction and Development Bank in a September economic outlook.

Despite the central bank appearing to turn to economic growth as the basis for its monetary policy decisions, the path of inflation still looks likely to guide the bank — and Turkey interest rate forecasts — in the long run.

Turkey interest rate forecast for the next 5 years

Forecasts tend to lie on the expectation that inflation will come down as wider global price pressures subside, which will accordingly take the pressure off the central bank to hike interest rates.

Forecasting houses don’t publicly hold projected Turkey interest rates in 5 years, but an outlook on rates and inflation in the interim offers a guide to where they could come in 2027.

ING’s Turkey interest rate forecast, as of 16 November, expected the policy rate to stay at 9% through to the fourth quarter of 2025, suggesting tightening by the central bank will not occur. But the broker did expect inflation in Turkey to decline by the third quarter of 2023 to 40%, before falling further to an average of 17.3% through 2025.

FocusEconomics panelists’ Turkey interest rate forecast suggested that the one-week repo rate will end 2023 at 22.8% and 2024 at 25%, a sharp jump from current levels, implying a step change from Erdoğan and the central bank.

Trading Economics as of 29 November similarly predicted that Turkey interest rates will rise, but to more modest levels of 10% in 2023 and 14% in 2024.

Note that long-term interest rate forecasts are hard to establish due to the uncertainties that lie ahead. Therefore, analysts and algorithm-based interest rate predictions in Turkey can be wrong, and shouldn’t be used as a substitute for your own research.

Always conduct your own due diligence before trading, looking at the latest news, a wide range of commentary, fundamental and technical analysis. Remember, past performance does not guarantee future returns. And never trade money you cannot afford to lose.

Natural Gas 2.860
Trade
+0.740%
US100 12164.8
Trade
+1.340%
BTC/USD 23468.75
Trade
+1.820%
XRP/USD 0.41477
Trade
+1.160%
ETH/USD 1613.25
Trade
+2.680%
The difference between trading assets and CFDs
The main difference between CFD trading and trading assets, such as commodities and stocks, is that you don’t own the underlying asset when you trade on a CFD.
You can still benefit if the market moves in your favour, or make a loss if it moves against you. However, with traditional trading you enter a contract to exchange the legal ownership of the individual shares or the commodities for money, and you own this until you sell it again.
CFDs are leveraged products, which means that you only need to deposit a percentage of the full value of the CFD trade in order to open a position. But with traditional trading, you buy the assets for the full amount. In the UK, there is no stamp duty on CFD trading, but there is when you buy stocks, for example.
CFDs attract overnight costs to hold the trades (unless you use 1-1 leverage), which makes them more suited to short-term trading opportunities. Stocks and commodities are more normally bought and held for longer. You might also pay a broker commission or fees when buying and selling assets direct and you’d need somewhere to store them safely.
Capital Com is an execution-only service provider. The material provided on this website is for information purposes only and should not be understood as an investment advice. Any opinion that may be provided on this page does not constitute a recommendation by Capital Com or its agents. We do not make any representations or warranty on the accuracy or completeness of the information that is provided on this page. If you rely on the information on this page then you do so entirely on your own risk.