What is OriginTrail (TRAC) coin?

OriginTrail is the world’s first decentralised knowledge graph  that uses a decentralised protocol to build transparency in the supply chain.

The OriginTrail network is powered by the Trace (TRAC) cryptocurrency, which enables true decentralisation and is an ERC20, Ethereum-based cryptographic coin.

Developers note that OriginTrail is more of an ecosystem than a company, which is based on a token economy with shared relations between users and network nodes. The ecosystem is based on a neutral Web3 protocol that enables safe data sharing between companies, organisations and blockchains via a decentralised knowledge graph network monitored by artificial intelligence (AI) and oracles.

TRAC started to gain momentum by the end of 2020 and reached its all-time high of $2.6809 on 1 November 2021 as the ecosystem participated in the NFT NYC gathering for non-fungible token enthusiasts, gaining much exposure.

After hitting its all-time high in November, the cryptocurrency’s price started to fluctuate, dropping to $0.7955 at time of writing (21 January 2022). But can it regain its momentum, and what factors are shaping OriginTrail price prediction going forward?

What is OriginTrail (TRAC) coin?

With that in mind, OriginTrail was created.

In short, OriginTrail allows IT providers to easily set up blockchain-supported data-sharing supply chains, and supports data of various formats, from those  used for supply chain tracking to documents and official certificates.

While using the OriginTrail Decentralised Network (ODN), an implementation of the DKG, people can look for information across a number of systems, exchange it through several data exchange protocols and integrate it into their own local knowledge graph or data store.

The ODN is an open-source protocol that uses decentralised nodes that allow companies and organisations to share information between themselves safely.

OriginTrail’s native cryptocurrency, TRAC, powers the decentralised knowledge graph (DKG) and drives the entire ODN as a utility token. The coin also acts as a collateral that keeps data creators honest and their data immutable.

The TRAC coin can be used on the ODN in several ways:

A total of 500 million TRAC tokens are available. The coin has a market capitalisation of over $289m (as of 21 January 2022) and is ranked 161st on CoinMarketCap with a market dominance rating of 0.02%.

OriginTrail is used by a number of major companies and organisations including Home Depot, Walmart and Target, as well as the US Department of Homeland Security.

For the next three years, TRAC’s price continued to decrease despite OriginTrail being the first blockchain start-up to be awarded Walmart’s Food Safety Innovation Spark Award , participating at the GS1 Global Forum in 2019 and partnering with the British Standards Institution (BSI).

The token stayed on a bearish trend until its price started to gain momentum at the start of 2021 after the ecosystem released its development update for the coming year announcing that Starfleet, the programme that will bring the ODN to the final stage of its initially envisioned protocol implementation that will operate in a multi-blockchain environment, will be released in early Q1 of the following year.

Since then, the coin’s price steadily grew, reaching its first $1 value on 25 October 2021, but it was not until 2 November 2021 when the token reached its all-time high of $2.6809 amid OriginTrail’s participation at the annual NFT NYC event. This was a 2,580% surge since its ICO.

In addition, on 2 November TRAC became available in supported regions on Coinbase Pro, which also triggered the token’s jump in price.

The cryptocurrency’s value fell to $1.4127 on 18 November 2021 and kept declining despite new partnership arrangements with Acala in late November. Since the all-time high in November, TRAC has  lost 75.27% of its value, as of time of writing (20 January 2022). 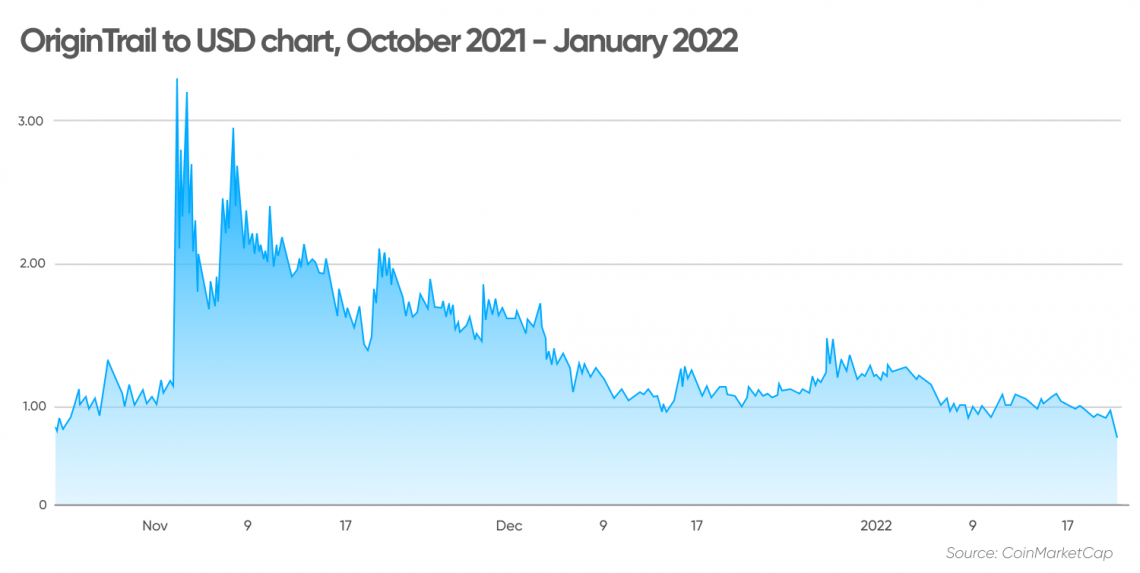 In most recent TRAC coin news, OriginTrail announced on 27 December 2021 that it would start the launch of version 6 of the DKG, bringing the token’s price, which had been falling since its all-time high in November, up to $1.3046.

Based on its analysis of the cryptocurrency’s past performance, the forecasting service predicted that TRAC could cost $1.858 next year and $5.170 in five years.

DigitalCoinPrice’s forecast also anticipated bullish results for TRAC, noting that the TRAC crypto price prediction for December 2022 is $0.4239. The coin’s price could rise to $0.6886 in December 2025, according to the site.

Although no TRAC crypto price prediction for 2030 is currently available, DigitalCoinPrice estimated that the coin will reach $1.22 in December 2029.

Please note that price predictions can be wrong. Forecasts shouldn’t be used as a substitute for your own research. Always conduct your own due diligence before investing. And never invest or trade money you cannot afford to lose.

Jenny Zheng, co-founder of Blockcast.cc and an early blockchain advocate, said that TRAC may continue to grow in 2022 if Covid-19 continues to restrict travel and affect work processes.

“In 2022, they have envisioned a customised purpose-built network on Web 3.0 called ‘decentralised knowledge graph’. The combination of blockchain and knowledge graphs will help to better allocate resources and help traditional companies understand how blockchain can be easily integrated into their current setup,” she told Capital.com.

BigONE Exchange chair Anndy Lian said that TRAC has the potential to grow if OriginTrail focuses its problem=solving on “more teething problems such as storage efficiency”.

Lian added that if OriginTrail can manage to get “top supply chain companies to try their tech offerings, they can reach their all-time high again even if the market is bearish”.

“TRAC’s most recent spike in value was on 27 December, when it reached $1.4748. Due to this, we can expect the token to reach $1.2 at the most throughout February of 2022, assuming it breaks the $1 price barrier,” Invezz crypto analyst Milko Trajcevski told Capital.com.