The stock price of Houston, Texas-based oil and gas explorer Occidental Petroleum (OXY), has been under-pressure in the past week despite oil prices remaining elevated. Since hitting a 52-week high at around $74 on 31 May, OXY stock price has been declining. In the third week of June, the stock was in three-days losing streak from 15 June to 17 June.

However, OXY has outperformed the S&P 500 index over a six month, year-to-date (YTD) and one-year period as of 20 June.

The OXY is also one of top 10 best stock performers on the US 500 index so far this year, which has attracted the ‘sage of Omaha’, Warren Buffett, to increase his share in the company.

Will the downturn be merely a pause in the climb that began last year for the OXY stock price?

The article will examine the company’s financial and stock performance, as well as latest Occidental Petroleum stock predictions from analysts.

Oil and gas explorers worldwide, including Occidental Petroleum, have benefited from oil and gas prices that began to soar in the second half of 2021. Worsening conflict between Russia and Ukraine and sanctions against Russia have further boosted oil prices, with international benchmark Brent crude oil briefly reaching $139 a barrel in March. 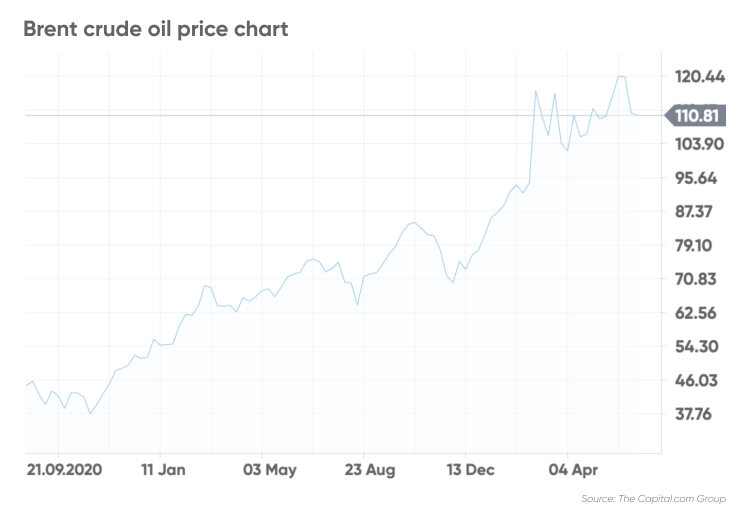 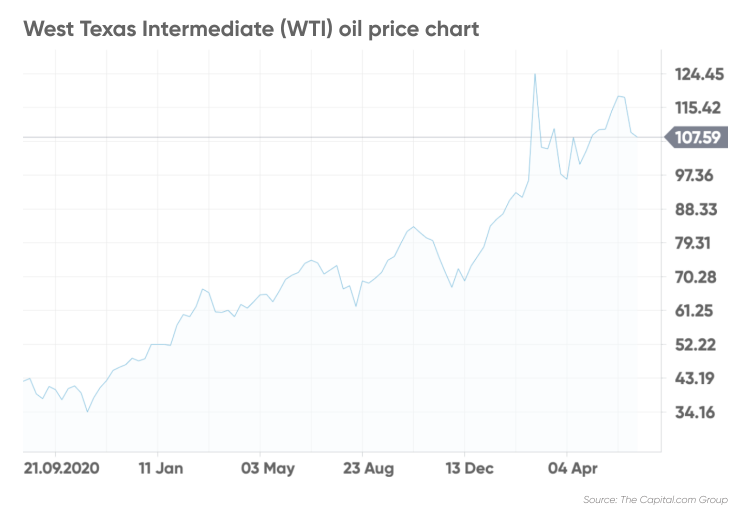 OXY’s bull run continued in 2022 following Russia’s invasion of Ukraine on 24 February. Sanctions against Russia, the world’s third largest oil producer, pushed Brent to $139.13 a barrel (bbl) and WTI to $103/bbl on 7 March.

In May, Occidental Petroleum’s share price hit a new 52-week high several times. On 27 May it reached $69.41 and $74.04 on 31 May. Better-than-expected first quarter’s earnings result boosted the OXY stock price performance in May, which gained 25.81% for the month.

Brent oil price has eased to $112/bbl on more anticipated supplies after the Organisation of Petroleum Exporting Countries (OPEC) agreed on 3 June to increase output to 648,000 barrels a day in July and in August to offset lower supply from Russia. Brent has risen around 44% this year.

The Relative Strength Index (RSI) readings at 34.60 pointed to neutral, but it was close to oversold or undervalued territory. An RSI reading of 70 or higher usually suggests that the stock has become overpriced and that a trend reversal is imminent.

What is your sentiment on OXY?

Give OXY a try

In the first quarter of 2022 financial results, Occidental Petroleum posted earnings of $2.12 a share, beating MarketBeat’s consensus analysts’ estimate of $2.03.

The company’s total revenue in the quarter stood at $8.533bn, exceeding MarketBeat’s consensus estimate of $8.06bn. The first quarter revenue also increased by 55.7% from $5.479bn in the first quarter of 2021 due to increased contribution from all business segments.

Vicki A. Hollub, Occidental Petroleum’s president, CEO and director, said in the company’s earnings call webcast on 11 May:

“Our strong financial results were driven by our businesses delivering exceptional performance while practicing disciplined capital allocation and cost control, combined with the benefits of an improved financial position and higher commodity prices.”

OXY pumped 1,079 thousands of barrels of oil equivalent per day (Mboed) of oil and gas for the first quarter of 2022, which was within its guidance.

The debt reduction in the first quarter was carried out through a combination of a $2.9bn tender offer, exercising a call provision on a note, and open market repurchases, Peterson said. The company has said it plans to reduce its near-term debt, including repaying $5bn of debt and reducing net debt to $20bn.

“We believe reducing debt to this level will speed our return to investment grade and better position us to sustain a greater dividend at lower prices. When we reach this stage, we intend to transition from proactively reducing debt to primarily addressing maturities as they come due,” Peterson said.

It also plans to spend capital in the range of $3.9bn to $4.3bn in 2022, unchanged from the guidance set early this year.

However, Occidental Petroleum revised Brent price forecast to $95/bbl for 2022, from a forecast of $73/bbl in its original budget, said Peterson.

“We are working to offset inflationary pressures through additional efficiencies, but if price increases continue, we may spend near the top end of our capital guidance this year,” he said. 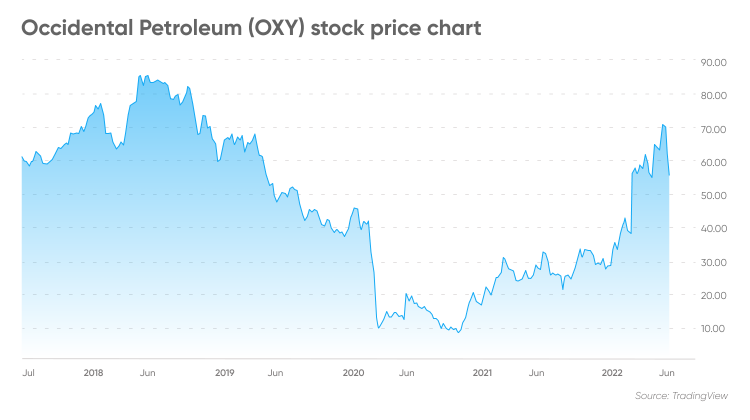 Dave Meats, Morningstar’s director in a note on 12 May said despite OXY’s strong financial performance, he was sceptical that the acquisition of Anadarko Petroleum’s Permian operation in 2019 would unlock much value on its production.

Meats increased the fair value estimate for Occidental’s to $45 from $44, taking into account the company’s solid first quarter earnings.

In a note on 16 June, Fitch Solutions highlighted the bearish side coming for oil prices from the potential of a US-Iran nuclear deal and the end of OPEC+ production curbs in August. A successful negotiation of the 2015 Iran nuclear deal with the US and other nations would allow more Iranian barrels to enter the market.

“However, both the nuclear deal and OPEC+ output have high uncertainty around the volumes and timing and should they both play out as we forecast, both will add sufficient supply to push prices lower in the second half of 2022 as global crude demand slows on higher interest rates and elevated inflation,” Fitch Solutions wrote in the note.

Will the recent downturn in Oxy’s stock price affect analysts’ optimism? As of 20 June, based on a consensus of 17 analysts polled by TipRanks, Occidental Petroleum was rated a ‘moderate buy’. Analysts offered an average 12-month price target of $73.71, representing a 32.46% increase from the last closing price of $55.68 on 17 June.

However, algorithm-based price forecasting service Wallet Investor had a bearish for OXY stock forecast, saying OXY was “a bad long-term (one year) investment”. In its Occidental Petroleum’s stock forecast for 2022, the service expected the share price to drop to $ 51.706 in December 2022.

For its Occidental Petroleum’s stock forecast for 2025, Wallet Investor expected the stock to fall to $23.542 a share in December 2025.

When looking for Occidental Petroleum stock predictions, it is important to remember that analyst projections can be incorrect. Projections are based on fundamental and technical analysis of the previous price trend of the OXY stock, but past performance does not guarantee future outcomes.

You should do your own research, and keep in mind that your decision to trade is influenced by your risk tolerance, market knowledge, the spread of your investment portfolio, and how comfortable you are with losing money. Never invest money that you cannot afford to lose.