Investing during inflation: Where to hide?

With global equities suffering through corrections, where can investors hide? Investing during inflation can be a tricky endeavour, but there are strategies to weather the storm.

In 2021, the very beginning of the rising price growth was seen as  “transitory”, driven by the reopening of the economy and low base effect, yet 2022 painted a different picture.

Russia’s invasion of Ukraine did a number of things to worsen the problem, pushing energy prices through the roof, intensifying supply chain constraints and boosting the prices of various commodities such as wheat, which Russia and Ukraine are the leading exports of.

Inflation is expected to peak at the end of 2022. The UK’s Bank of England (BoE) suggested a 11% consumer price index (CPI) reading in October, while the US Federal Reserve (Fed) raised its annual average inflation projection to 5.3% for 2022.

Both banks have hiked interest rates, to 1.25% and 1.5%-1.75%, respectively, in an effort to cool demand, but the supply aspect of the current period of inflation means that policy tightening may not be enough.

What to invest in during inflation

But there are sectors that will be more shielded.

Below is the list of assets that investors can consider when investing during inflation.

A 2021 research paper, The Best Strategies for Inflationary Times, looked at historical returns of different US equity sectors when the country’s headline inflation figure moved above 5% over the past 95 years. Its findings revealed that across all sectors only energy stocks showed positive annualised real returns.

Energy-linked companies that focus on the exploration and production of oil, gas, and renewable energy sources were the optimal stocks to hedge against inflation, according to the report.

The reason these companies benefit from inflationary spikes is that rising commodity prices, including the cost of energy, is what often drives inflation, according to Laith Khalaf, head of investment analysis at AJ Bell. 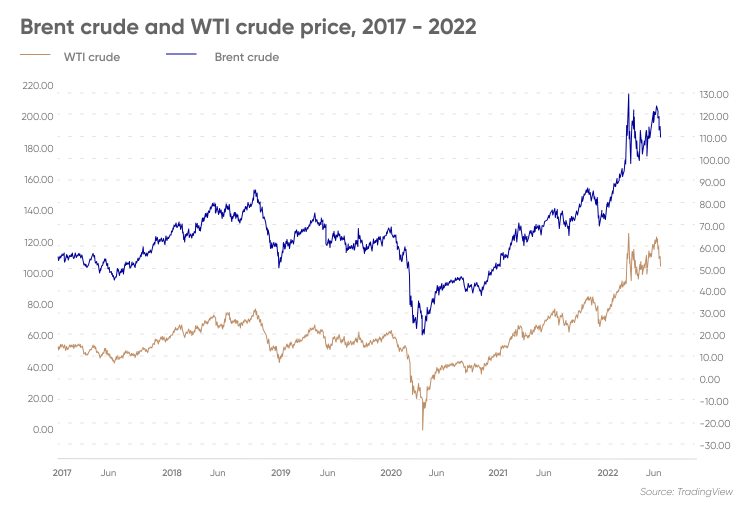 Similarly, mining stocks that extract raw materials from the ground could benefit from inflation, as they have high exposure to commodity prices.

“If commodity prices are rising, then you would expect the share prices of the companies that are digging the stuff out of the ground and selling it also do well, or at least do better than other areas of the equity market,” Khalaf told Capital.com.

When traded individually, all commodities showed positive returns under inflationary pressure, averaging an annualised 14% return. This contrasts with normal periods when commodity returns are in single digits.

“Historically, commodities have not only been robust to rising inflation, but also have benefitted from such an environment relative to normal times,” the report concluded.

Among commodity groups, energy led returns by a significant margin of 41%, followed by strong performance in precious and industrial metals, with returns of 11% and 19%, respectively.

According to Saxo Bank’s head of equity strategy, Peter Garnry, commodities are essential inflation investments, especially during the first wave of rising price growth driven largely by the supply side.

“We are also of the view that the world will be in a commodity super cycle during this decade driven by the green transformation, underinvestment in commodities over the past decade, urbanisation and the fallout from the war in Ukraine,” Garnry said in a note to clients sent in June 2022.

Banks could be another type of stocks to buy during inflation, as an unexpected spike in prices introduces the possibility of an interest rate hike by central banks.

In 2022, the policy tightening cycle has already started, with central banks around the world, including the BoE, the Fed and the Swiss National Bank, responding to inflationary pressures by raising interest rates and tapering bond buying programmes.

That’s good news for banks and lenders, as higher interest rates mean borrowing is more expensive, resulting in higher profits from lending margins. In theory, banks should benefit from an inflationary environment.

According to Khalaf, there are more competing factors at play. Bank stocks are plugged into the economy and an inflationary shock changes the economic dynamics.

“You would have a lot of worries about the businesses and consumers not being able to pay back their debt in a rising interest rate environment. Some analysts may argue the number of debt defaults is going to rise,” he told Capital.com.

The 2021 research paper mentioned above also showed that from a historical perspective, financial stocks performed weakly during inflationary spikes, as default risks overshadowed the possibility of monetary tightening.

In the current context, the increasing risk of a recession in 2023 means that any impact of higher lending profits are likely to be offset by weaker demand.

Inflation is decreasing the value of money, which directly affects companies’ future earnings. Growth stocks with high valuation metrics, such as price-to-earnings ratio, are particularly vulnerable to inflation spikes because their share prices are based on the expectation of future profits.

“For instance, tech companies that aren’t profitable right now, but are expected to be profitable in the future – inflation is going to erode the value of those future earnings. Investors may reconsider their positions if there is an inflation spike,”  AJ Bell’s Khalaf told Capital.com.

Shortly after an inflationary shock, there may be an overall sentiment shift towards value stocks making them a more suitable investment during inflation, according to Khalaf.

“In the immediate term you’d expect a shift towards value as roaring inflation would knock the growth areas where there aren’t many earnings to speak of at the moment,” he said.

As rising prices mean that the cost of raw materials used by companies to produce goods grow, the big risk for businesses during an inflationary period is shrinking profit margins. The key question is to what extent can a company pass increased costs to consumers.

In a note published in July 2021, UBS said that companies with higher pricing power would do better during an inflationary environment, as they would be able to raise prices for their products and services without losing revenues.

To identify companies with high pricing power, investors could search for firms with a dominant market position that offer high-quality products not easily substituted. Such companies tend to enjoy relatively more stable profit margins, according to UBS.

Historically, house prices have kept up well with rising price growth. Real estate investment funds, or REITs, could be assets to choose when investing during inflation.

“REITs existed during the 1970s inflation period and were a catastrophe, but the real estate market and REITs have evolved a lot since the 1970s so it might be a stretch to expect something similar,” said Garnry.

“Real estate is attractive during inflation because rents are linked to CPI indices and some rent agreements come with shorter duration which means they can catch up to inflation faster.”

However, the risk of higher interest hikes may offset some of the gains in the property space as mortgages become more expensive, hurting housing demand.

Inflation-linked bonds like the US Treasury Inflation-Protected Securities (TIPS) or UK index-linked gilts may give some peace of mind for investors as their interest payments are adjusted for CPI.

They are often issued “with longer maturity than the majority of nominal bonds, which means that the interest rate risk is higher in the short-term, but longer term inflation-linked bonds will offer a better return after inflation than nominal bonds if inflation is trending higher,” Garnry added.

Non-traditional investments that do well during inflation

The 2021 research paper on inflation identified some other less conventional assets that tend to perform well during an inflationary period. Collectibles were one of them, including art, rare wine bottles and stamps.

Collectibles are unlikely to be a part of a traditional portfolio because they are traded in small volumes and are heavily illiquid.

Yet collectibles historically lived up to their reputation as a store of value in inflationary times, according to the study. Real annual returns were positive during inflationary episodes, with art at 7%, wine at 5% and stamps at 9%.

“Moreover, we notice a possible distinction between art and stamps on the one hand, where performance markedly improves in inflationary periods relative to normal times, and wine, which experiences lower but more consistent returns between normal and inflationary times,” the research paper said.

Note that investing during inflation can be risky as market sentiment is damaged by uncertainty and it’s hard to predict how the asset prices will behave. Analysts’ views can be wrong and shouldn’t be used as substitutes for your own research.

Remember that past performance does not guarantee future returns. When looking for ways of how to profit from inflation,  you should interpret historical data with a pinch of salt, taking into account that the world is in a constant state of flux.

Oil stocks, for example, may behave differently as the world moves towards cleaner energy and electric vehicles amid mounting climate change concerns. A surge in oil prices may not have the same inflationary impact in the future.

Investors should always do their homework and analyse all factors at play. Economies evolve, their nature shifts between agriculture, manufacturing and services, sectors transform and consumer patterns change, which means the impact of inflation may vary. An investor should stay alert to the wider context.

Fisker shareholders: Who owns the most FSR stock?

Softbank shareholders: Who owns the most SFTBY stock?