Why does the yen’s value appreciate in a recession?

The yen is poised for vengeance, but when will it happen?

The Japanese yen (USD/JPY) has been the worst performing major currency in the first five months of 2022, diving to a 20-year low versus the dollar, slapped by Federal Reserve interest rate hikes that widened the gap with the Bank of Japan’s ultra-loose monetary policy.

But despite the extreme market pessimism surrounding the yen today, the Japanese currency might yet pull a wild card out of the deck if the world economy faces a recession. Historically, the yen has been a recession-proof currency that has functioned as a tactical hedge against periods of economic stagnation.

What are the factors that might resurrect the yen, in a market that has possibly prematurely sanctioned its demise?

This shows that the yen has historically served as an extraordinary recession hedge for investors.

Why does the yen’s value appreciate in a recession?

The principal driver by which the yen strengthens during recessions is the reduction of US interest rates, which is the exact reverse of the current situation.

Typically, during recessions, the Federal Reserve is called upon to support economic recovery by reducing interest rates, as declining consumption and growing unemployment tend to lower inflation.

This causes US Treasury yields to fall, lowering the rate gap with Japanese government bonds, and therefore easing the pressure on the USD/JPY pair.

It should also be remembered that Japanese investors are the largest holders of US securities, such as equities and bonds (Treasuries). When there is a recession, Japanese investors tend to bring their foreign assets back home – raising demand for their local currency and boosting the yen.

Japanese investors are the largest foreign owners of US Treasuries

Credit: Capital.com; Data: Department of the Treasury/Federal Reserve Board

The yen is poised for vengeance, but when will it happen?

The rising probability of a recession provides potential for the USD/JPY exchange rate to fall from the current overbought levels. But there is no guarantee this will occur in the near future.

In the short term, the yen may continue to suffer from rising Treasury yields, which are backed by expectations of an increasingly hawkish Fed, as well as rising oil prices, as Japan is a net importer of energy commodities. Moreover, the fact that the Bank of Japan continues to stuck with its yield curve control policies – keeping Japanese bonds yields artificially low – does not support the JPY.

Whenever US inflation has topped 5% while unemployment fell below 4%, a US recession has always happened within eight quarters, and a yield curve inversion has forecast every recession since 1968, albeit with a one-year lag.

Both conditions have been met in the first quarter of 2022, but JPY’s contrarian bulls may have to wait a little longer before declaring vengeance theirs. 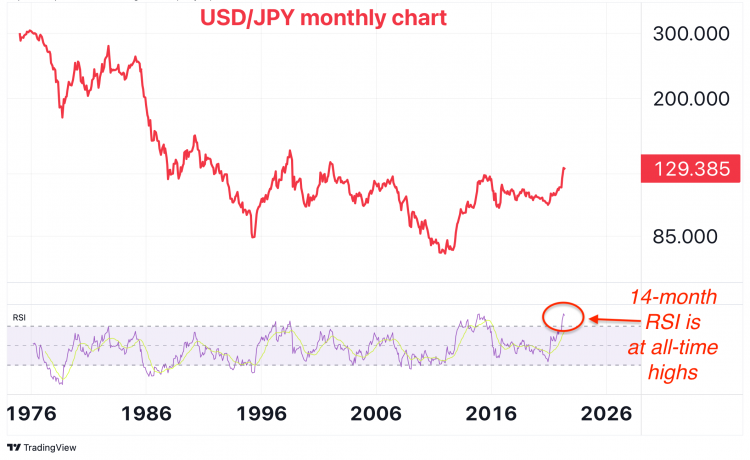