Gold mining stocks: ‘A leveraged play on the price of gold’

Gold miners have seen soaring gains in the last year, far outperforming gold itself. The VanEck Vectors Gold Miners ETF (GDX) is up 22% year-to-date, whereas the metal itself is hovering around the range of 5% to 6%. What’s more, when gold plunged recently, gold miners managed to stay resilient, signalling strong business fundamentals.

The GDX, which primarily invests in large-cap gold miners, has also outperformed the VanEck Vectors Junior Gold Miners ETF (GDXJ), which invests in small-cap gold miners. This is largely due to big-cap gold companies typically having stronger balance sheets with higher profit margins, and being able to afford higher borrowing costs in the event of rising interest rates, such as we are seeing now.

With the rising cost of debt, a number of smaller gold mining companies have been struggling to remain in the market.

With gold viewed as a critical safe haven asset in times of conflict and volatility – such as now, with the Russia-Ukraine war still raging – investors are asking an important question: why are gold miners outperforming the yellow metal itself, and are gold miners a viable investment opportunity for the future?

Why have gold miners outperformed gold this year?

Gold miners have traditionally outperformed bullion in bullish markets, due to the way these companies use their operating leverage in order to increase profits, which leads to a boost in share prices.

Thus, this is largely due to profit expansion, as miners are able to sell appreciating gold fairly quickly, thus avoiding a decline in prices, whereas their own operational costs rise much more slowly.

According to David Jones, chief market strategist for Capital.com, “We’ve seen a rise in the gold price this year because of higher inflation, stock market weakness and of course the Russian invasion of Ukraine. Investors have sought the safe haven of gold.

“A rise in the gold price is usually going to lift the gold miners as well. It’s not that unusual for miners to outperform gold in a rising gold market – and perform worse on the way down.”

Jones further highlighted: “I think one way to think of gold mining stocks is a leveraged play on the price of gold. The companies themselves are borrowing money for mining etc, so this helps magnify their profits in the good times – which translates into a strong share price.”

With gold currently rallying once more due to the Russia-Ukraine conflict, gold miners are once again finding it easier to sell their output to anxious investors flocking towards safe haven assets.

What is your sentiment on ABX?

Give ABX a try 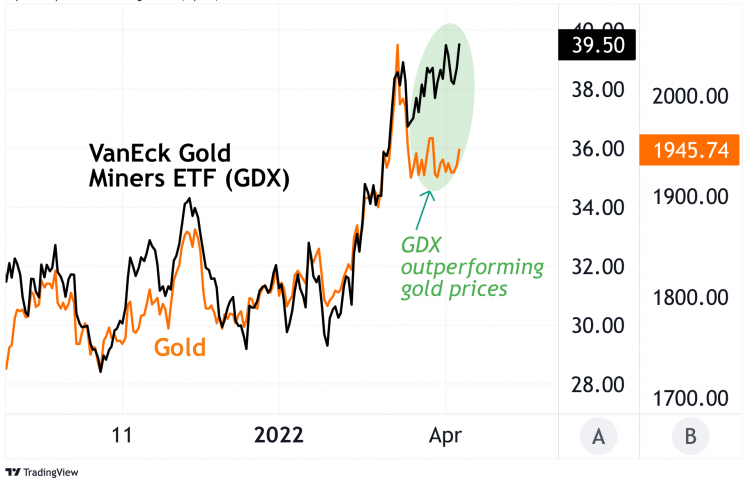 Who are the major gold players?

Newmont (NEM), Barrick Gold (ABX), Franco-Nevada (FNVca), Agnico Eagle Mines (AEM) and Wheaton Precious Metals (WPM) are some of the biggest gold mining companies in the world, and make up the lion’s share of the GDX.

Barrick Gold is one of the miners which has seen considerable upwards pressure in the last few weeks, with a number of projects under its belt. The company recently took over the Reko Diq mining project in Pakistan from Antofagasta (ANTO)

The Reko Diq mine has one of the biggest undeveloped gold reserves in the world, with the capacity to produce around 250,000 ounces of gold a year for more than 50 years. The company has gained 31% in the first quarter of this year alone, as well as having been upgraded to “BBB+” by S&P, with a stable outlook. This has considerably boosted investors’ faith in it.

Newmont has also done well, with the recent acquisition of the Coffee Gold Project in Canada, as well as being upgraded to a “BBB+” by S&P. The company has gained 27% since the start of the year on the back of rising gold prices.

The top 10 mining stocks have almost tripled their earnings per share in the last couple of years, whereas the top 20 S&P companies have faced a loss of around 15% on the same count, which has significantly boosted investor confidence in the potential upside of gold mining stocks for the near future.

Inflation has hit multi-year highs recently, especially in the US, forcing the US Federal Reserve to take a much more hawkish stance than in previous years. This has led to precious metals faltering in recent times, as investors regain cautious optimism regarding the current market scenario and attempt to move towards riskier assets.

David Jones pointed out: “What happens with inflation is the big question for the rest of this year. In theory, higher rates would mean a higher US dollar (DXY), which would put pressure on gold. The dollar is trading at an 18-month high at the moment and still looks strong, so I do wonder if gold and gold miners might be under some pressure in the months to come.”

With the US Federal Reserve clearly highlighting that it will be raising interest rates much faster than expected, and investors anticipating a rise of around 50 basis points by May this year, gold miners are likely to take something of a hit.

This is due to gold having an inverse relationship with Treasury yields, which are likely to rise even further as interest rates are hiked, following the last few years of the market being flooded with stimulus packages due to the ongoing Covid-19 crisis.

More importantly, higher interest rates will also significantly raise the cost of borrowing for gold miners, which has traditionally been a key source of financing. With borrowing becoming more expensive, the rate of expansion of existing mines, as well as the discovery and exploration of new mines, threatens to slow down considerably, hitting profits.

​​Top gold mining stocks to watch: back in focus as inflation bites