GBP/NZD outlook: Where is the pair now?

GBP/NZD prediction: What are the analysts saying?

The GBP/NZD pair is one of the world’s most popular cross-currency pairings, with both currencies being in the top ten most traded in the world.

What is the GBP/NZD’s outlook for 2022? What has been the major GBP/NZD news that has been driving the pair’s rate in 2021 and what is the pound sterling to NZ dollar forecast for 2022? We answer these questions through the latest analysts’ predictions and look at what to consider when trading the GBP versus the NZD.

GBP/NZD outlook: Where is the pair now?

Through 2021, the GBP/NZD pair has been largely rangebound, trading in the 1.88 to 2 range. It hit a peak of 2 in August 2021, after a fresh wave the Delta variant of Covid-19 sent New Zealand into another lockdown and forced its central bank to delay hiking interest rates.

However, once the Reserve Bank of New Zealand started cutting rates and was ahead of the Bank of England with regard to its hawkish tones, there was a slight swing in the NZD’s favour as the GBP/NZD rate hit a low of 1.88 in November 2021.

The surprise rate hike by the Bank of England in December 2021, plus concerns over the global economic recovery in light of the rapid spread of the Omicron variant of Covid-19, has sent the GBP higher and in 2022, the GBP/NZD rate reached last year’s highs of 2. 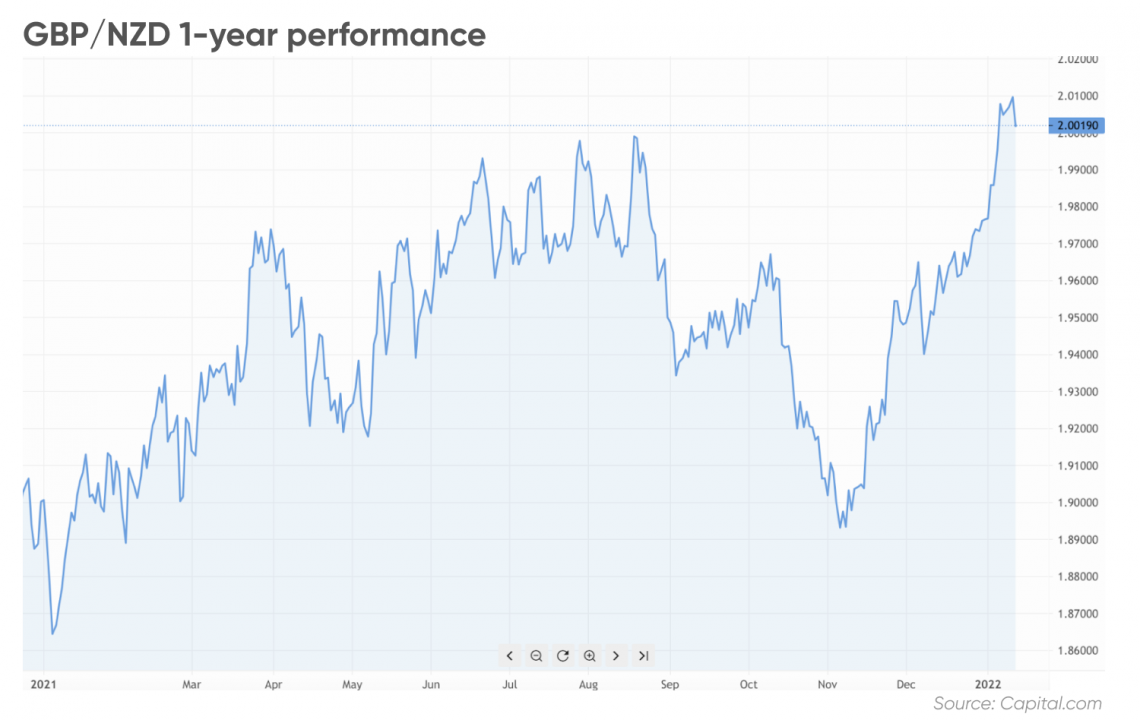 The current market sentiment for the British pound to NZ dollar is one that reflects analysts’ projections of the pair remaining rangebound within 1.88 to 2. With the GBP/NZD rate at 2 on 12 January 2022, data from Capital.com showed trader sentiment at 24% bullish and 76% bearish. This suggests the exchange rate has hit another peak and traders might expect it to come down. However, the sentiment data was calculated automatically, based on open positions for GBP/NZD on the platform and should not be considered as an incentive to trade the asset.

Analysts at ASB Bank see short-term resistance for the NZD/GBP at 0.53, which would translate to a support of 1.88 for the GBP/NZD. They see support for the NZD/GBP in the short-term at 0.50, or a resistance of 2 for the GBP/NZD. This further highlights that the exchange rate is currently closer to the ceiling rather than the floor. Over the coming months, the impact of Omicron on the global economy is most likely to dictate the movement of GBP/NZD pair as both central banks are now in the rate hike cycle.

Because New Zealand has a smaller economy, the NZD’s movements are typically linked to other assets and commodities. Usually, it closely tracks the developments of the AUD, the CNY and the JPY. However, in 2021 the strong economic recovery of New Zealand has seen the NZD outperform its peers.

New Zealand has vast coal reserves and the fuel is an important energy source for the country. Therefore, the NZD is affected by coal prices. Dairy products and tourism are large foreign exchange earners for New Zealand and therefore, dairy prices have an impact on the currency. If dairy prices move higher, it is likely the New Zealand economy is doing well. Similarly, before Covid-19, the economy was considered strong and its currency appreciated when tourism increased.

Movements on key Asia Pacific equity indices such as the ASX and Nikkei 225 also impact the NZD indirectly.

Sterling is one of the world’s strongest currencies. It’s the former global reserve currency with a role in a major financial trading centre. The value of GBP has been predominantly driven of late by the status of the Brexit process that began when the UK voted to leave the European Union in a 2016 referendum.

GBP/NZD prediction: What are the analysts saying?

The analysts’ GBP/NZD prediction for 2022 is largely one of stability as they expect the pair to trade within the current range without any dramatic movements by either currency with both the Bank of England and the Reserve Bank of New Zealand in a rate hike cycle.

According to Mieneke Perniskie, trader at Kiwibank, the NZD is expected to “continue to maintain the current range” versus the GBP.

“Central banks certainly came to the Christmas party, finally relenting to the fact that it is looking as though inflation may be here to stay, but equally, it doesn’t look too great on the Coronavirus front either at the moment. Central banks are now starting to gear up to fight inflation, but they are keeping a few tricks up their sleeves in case they need to add back stimulus,” Perniskie said in a note.

According to Francesco Pesole, FX strategist at ING Bank, the spread of Omicron does pose some risks for the GBP.

“The surprise rate hike by the Bank of England [on 15 December] has offered only some time-limited support to the pound. The fast spread of the Omicron variant in the UK may keep some pressure on GBP around Christmas, in particular as the government may opt to impose some new restrictions. Potential political turmoil may also weigh on GBP, as markets attempt to re-assess both the Brexit policy and the stability of the Johnson Cabinet after the resignation of Brexit chief negotiator David Frost,” Pesole said in a note.

“Still, the pound was quite oversold before the [BOE’s December meeting] and given it is now back to pre-meeting levels, its positioning is likely still overstretched to the short side. We think this could help limit GBP losses, but the risks still appear moderately skewed to the downside,” he added.

Regarding the NZD, Pesole said that the currency is “a bit more vulnerable” to the hostile risk environment.

“Although NZD could benefit from improved Chinese growth sentiment, it cannot count (unlike AUD) on an ongoing rally in a main commodity (like iron ore for AUD),” he said.

According to analysts at ANZ Bank, the fate of the NZD depends on whether the Reserve Bank of New Zealand can keep delivering rate hikes, in light of the risks posed by Omicron.

“As a global leader in the pandemic era reflation cycle and on expectations for policy normalisation, the fortunes of the NZD rest very much on the strength of the domestic economy. The central question is whether the RBNZ can deliver the nearly 200 basis points of hikes implied by market pricing,” ANZ Bank said in a note.
“So far, there is little to indicate that market pricing has moved too quickly, with New Zealand facing some of the strongest capacity constraints since the 1970s. This is translating into growing pressure on wages and multi-decade highs for core inflation. The breadth of these inflationary pressures is expected to push the RBNZ to hike six times next year,” the note added.

When looking for GBP/NZD predictions, it’s important to bear in mind that analysts’ forecasts can be wrong. Analysts’ projections are based on making a fundamental and technical study of the currency pair’s performance. However, past performance is not a guarantee of future results.

The British pound sterling (GBP) to New Zealand (NZD) exchange rate shows how many NZD are needed to buy one GBP.

Known commonly as the Kiwi, the New Zealand dollar is the official currency of New Zealand. The Kiwi is the tenth most traded currency in the world, even though its gross domestic product (GDP) on a constant currency basis is only ranked 49 in the world.

One of the reasons for its high trading volume is because it is considered a carry trade currency. In other words, it provides a high yield therefore investors buy NZD and fund it with a lower yielding currency such as the Japanese yen or the Swiss franc.

The GBP is the official currency of the United Kingdom, the world’s fifth largest economy, and it is fourth most traded currency in the world, accounting for 12.7% of all global forex transactions in the world.

According to analysts, the GBP to NZD exchange rate is forecast to trade within a similar 1.88 to 2 range in 2022, with support seen at 1.88 and resistance at 2. Whether you buy or sell is your decision. Always remember that your decision to trade depends on your attitude to risk, conducting your own research and the spread of your investment portfolio.

Both central banks in England and New Zealand are in a rate hike cycle. While the interest rate hikes in New Zealand had already been priced into the NZD, the Bank of England pulled a surprise in December when it raised rates, leading to a jump in the value of the GBP. The momentum might slowly die down as the market adjusts itself to the GBP’s revised rate hike cycle.