The price of GameStop (GME) stock rose in July following the launch of the company’s marketplace for non-fungible tokens (NFT), a change in the leadership team, and a 4-for-1 stock split.

Last month, the GME share price increased by nearly 18%, while short interest for the stock also went up. Could the combination of these two developments trigger another GME short squeeze?

In this article, we take a closer look at the latest news and GameStop stock predictions from analysts to see if another short squeeze for this so-called meme stoc is likely.

What is GameStop? Company overview

Founded in 1984, GameStop is a retailer of entertainment and gaming products with stores located in the United States, Canada, Australia and Europe. In addition, the company sells products via its official website.

Aside from video games, the company also sells toys, collectibles, apparel, and gadgets while it has recently pivoted to the Web3 space through the launch of a marketplace for NFTs called the GameStop NFT Marketplace.

GameStop’s CEO is Matt Furlong, who was appointed as head of the company in June 2021. The firm employs over 30,000 people and is headquartered in Grapevine, Texas.

What is your sentiment on GME?

Give GME a try

GameStop short squeeze explained: Why is this a possibility?

GameStop has been on the radar of short sellers for a while as the company’s fundamentals have been deteriorating for years since most consumers turned to online channels to purchase video games.

In addition, the pandemic affected the company’s operations as stores remained closed for months due to lockdowns.This put GameStop in a difficult position as its negative cash flows increased significantly.

By the end of February 2020, the company had cash and equivalents of roughly $500m but burned nearly $414.5m during that fiscal year (2019). Sales kept declining in the 2021 fiscal year due to the pandemic. The company managed to stay afloat by liquidating a large chunk of its inventory to stay cash flow positive.

Short-sellers were expecting to see the company’s share price decline as the business deteriorated.

However, in January 2021, coordinated efforts from retail traders managed to push the price of GME stock to all-time highs as they squeezed short-sellers out of their positions by buying large amounts of stock and short-dated option contracts.

Brokerage firms were forced to hedge their exposure to these contracts by buying GME stock in bulk. This fuelled a rally that pushed GME’s price to $120 a share (post-split). 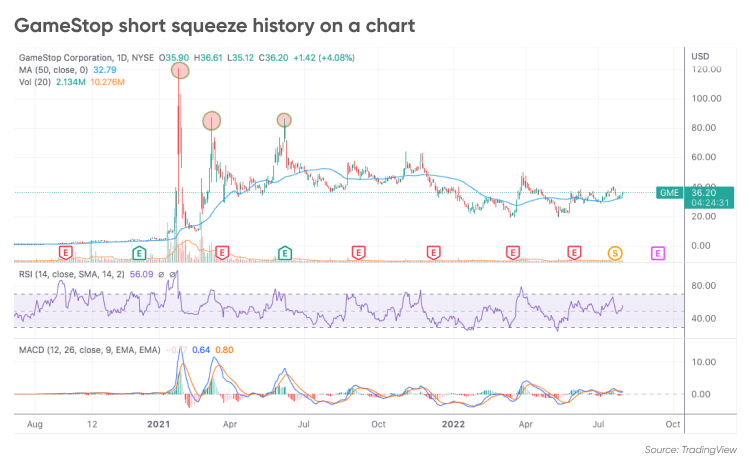 The price action continued to be highly volatile and multiple sharp upticks and downticks occurred during the first half of 2021. However, the influence of retail traders on the price progressively faded, although the stock never got close to where it was before the squeeze.

As a result of these events, GME is now considered a “meme stock” – a designation that indicates that the stock price could be highly influenced by the activities of retail traders. These traders are constantly monitoring the price action to act if there are indications that another GameStop short squeeze is taking place.

The company’s pivot to Web3 through the launch of its NFT marketplace has been partially responsible for the relatively positive performance of GME stock compared to broad-market indices.

However, despite the stock’s resilience during what has been a tough year for equities as a whole, short-interest in GME stock has kept increasing.

According to data from MarketBeat, the number of shares sold short increased from 13.3 million to 14.9 million (adjusted to account for the 4-for-1 stock split) resulting in a 12% increase during the 15 days ended on 15 July.

Notably, this increase in short positions occurred only days before the company’s 4-for-1 stock split occurred. Since 15 July, the price of GME stock has risen almost 3%.

This uptick in short interest does not necessarily indicate that a GameStop short squeeze will occur but it does increase the odds of that happening. Currently, it would take short sellers a bit more than four days to fully cover their positions as per data from MarketBeat based on the average trading volumes of the stock.

The higher the days-to-cover metric is, the more difficult it will be for short sellers to cover their positions without affecting the price of the stock as their buying activity will tip market participants that large volumes of the stock are being demanded – a situation that typically triggers an increase in the price of the instrument.

Moving forward, even though short interest is not anywhere near where it was back in January 2021, when it stood at over 140, of the stock’s public float, traders could still trigger a GME short squeeze, as short interest was standing at 19.6%, as of 15 July.

That said, it would be difficult to see the price rising to the levels seen in 2021, as the days-to-cover metric is significantly lower than it was back then, as is the percentage of shares sold short relative to GME’s public float.

It is important to note that the latest data provided by MarketBeat is from 15 July. This means that investors should not rely on this information to buy or sell GME stock, as the actual short interest percentage and other metrics may have changed.

GameStop reported its financial results covering the first quarter of the 2022 fiscal year on 1 June 2022.

During the three months ended on 30 April, GameStop sales rose 8% to $1.38bn compared to the same period a year ago, while the firm’s gross profit margins experienced a 419 basis points decline to 21.7%.

As a result, net losses more than doubled to $157.9m. The company reported negative operating cash flows of $303.9m and capital expenditures of $10.8m, which resulted in negative free cash flows of $314.7m.

By the end of this period, GameStop had total cash and equivalents of $1.04bn and nearly no long-term debt.

“This [short squeeze] does seem unlikely and there seems no reason at the moment for investors to treat GameStop differently to any other stocks.”
by David Jones, Chief Market Strategist at Capital.com.

According to data from MarketBeat as of 3 August, the consensus recommendation for GameStop stood at ‘sell’ with the two analysts surveyed agreeing on this outlook.

The consensus view for the stock didn’t seem like a GME squeeze price prediction, as the average 12-month GME price target was at $22 per share resulting in a 38.6% downside potential based on 2 August’s closing price of $35.84. The highest 12-month forecast for the stock stood at $36.5 per share and the lowest at $7.50.

Does it mean that the odds of a GME stock short squeeze are low?

Commenting on a GameStop future and a potential for another GME short squeeze, David Jones, Capital.com’s Chief Market Strategist, said:

“GamesStop is still a popular stock with many retail investors, following its rise to prominence at the start of the so-called meme stock craze in January 2021. Since then there has been plenty of volatility but no real direction – the heady heights of the January 2021 highs seem a long way away. It seems that many are hanging on, or entering, in the hope of another explosive move – perhaps another short squeeze.

“This does seem unlikely and there seems no reason at the moment for investors to treat GameStop differently to any other stocks. Following the stock split - its adjusted price is trading roughly in the middle of the range for the past 18 months.  Lots of volatility but no overall direction seems likely again for the next few months for this stock.”

When looking at GameStop (GME) stock forecasts, it’s important to bear in mind that analysts’ and algorithm-based predictions can be wrong. They are based on an analysis of the GameStop share price history. Past performance never guarantees future results.