Bitcoin (BTC), the crypto market pioneer, is, by market capitalisation, twice the size of ethereum (ETH), the second largest coin. Will ETH eclipse BTH following successful completion of The Merge that saw it switch to the proof-of-stake (PoS) consensus mechanism?

Here we take a look at the ETH to BTC exchange rate, and what factors are shaping ETH/BTC in 2022 and beyond.

ETH/BTC represents the exchange rate between ether, the Ethereum blockchain’s native coin, and bitcoin, the native coin on the Bitcoin Network.

ETH/BTC represents how many bitcoins can be bought for one ether, with the rise in ETH/BTC signifying either a rise in ETH or fall in BTC, and vice-versa.

BTC was meant to be “a purely peer-to-peer version of electronic cash”. However, over the years the cryptocurrency has also become a store of value and a comparison to gold as a hedge against rising inflation.

Bitcoin mining relies on a blockchain that connects all public transactions. Using a proof-of-work (PoW) consensus, BTC miners compete against one another to solve mathematical equations and confirm the legitimacy of transactions. They are rewarded in BTC tokens.

In order to reduce the rate at which new BTCs are given as rewards, the cryptocurrency was designed to undergo halving events roughly every four years. A halving reduces the number of bitcoins released into circulation by half, limiting supply.

Ethereum, a programmable network for building decentralised applications (dApps), was launched in 2015, and was inspired by bitcoin’s limitations.

“While Bitcoin is only a payment network, Ethereum is more like a marketplace of financial services, games, social networks and other apps that respect your privacy and cannot censor you,” Ethereum’s website says.

Another key element of Ethereum is the blockchain’s ability to run smart contracts – computer programmes on the blockchain that allow for the creation and smooth running of dApps.

Just like BTC, ETH initially used a PoW mechanism, but since 15 September 2022 relies on PoS. The change became known as ‘The Merge’, and was designed to reduce Ethereum’s energy consumption by around 99.95%.

The Merge is one of a series of upgrades. In a July presentation, the platform’s co-founder, Vitalik Bouterin, named the following development stages, but did not specify when they will happen:

These updates also have potential to affect the ETH price  shaping the ETH to BTC exchange rate. 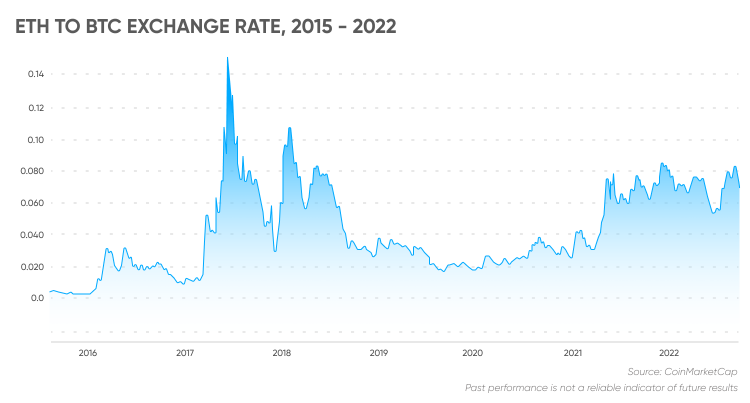 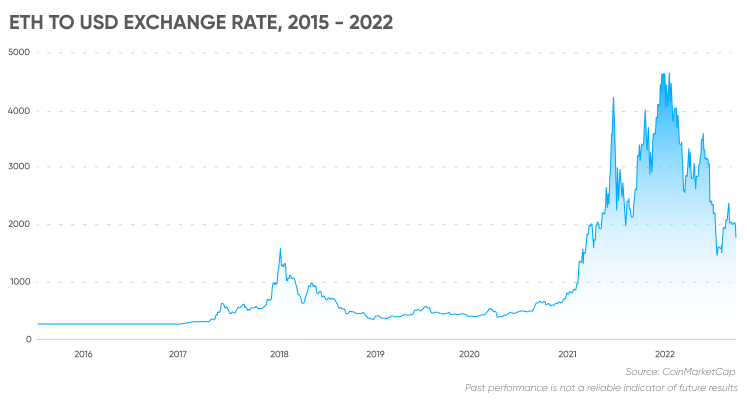 ETH managed to uphold its positive trend against BTC for the next three weeks as the price chart gained 16% more, peaking at 0.1131BTC on 1 February 2018. 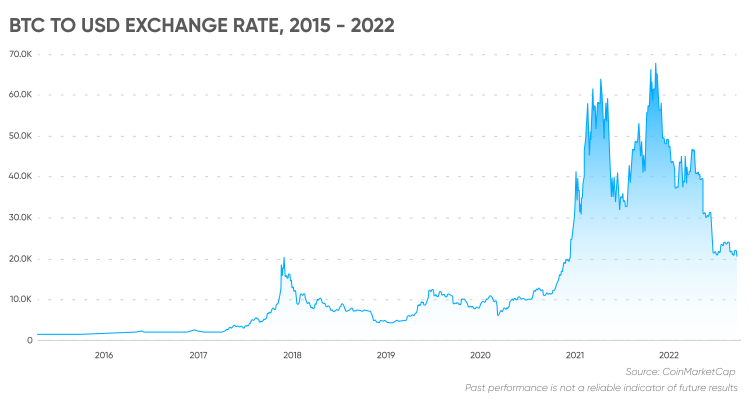 Following the collapse of the TerraUSD (UST) stablecoin and its sister token LUNA and the wider crypto crash that followed, the ETH to BTC exchange rate fell by nearly 30% from 0.07554BTC in May 2022 to 0.05373BTC in July, indicating a faster decline of ETH price.

ETH’s price dipped to as low as $993 in June, with BTC slumping to $19,017 amid the bearish sentiment in the cryptocurrency world sparked by LUNA collapse and tightening monetary policy.

Is The Merge driving ETH/BTC?

On 15 September Ethereum successfully upgraded its system from PoW to PoS after a six-year build-up. However, the ETH price did not rally as much as investors were anticipating.

Anndy Lian, chief digital advisor at the Mongolian Productivity Organisation and author of NFT: From Zero to Hero. noted that right after The Merge, the price swung above $1,640 and fell shortly after:

“This is very much expected. There was much influx of ETH into various exchanges since the 12th and then building up to around 1.8 million ETH before the completion. In this case, I see that investors could be planning to sell off before the price fell.”

Lars Seier Christensen, chairman of the Concordium Foundation and founder of Saxo Bank, said that the Ethereum community anticipated a “much more positive reaction to the successful Merge”. He added that the recent rally was what in TradFi we call “buy the rumour, sell the fact” and that whoever saw The Merge as upbeat news had already bought ETH.

“Merge is really a non-event. It changes nothing in terms of scalability or fees, and actually antagonises a number of long-term Ethereum supporters - the miners,” he added.

Eugene Zomchak, CoinLoan’s head of product, told Capital.com that the value of ETH to BTC is likely affected by other microeconomic factors such as the cryptowinter and the Fed’s policy tightening than The Merge, noting:

“There are some positive forecasts coming in from enthusiasts who note that the Merge was a landmark event and the price of ether could surge by two, three and even five times.”

Lian stressed that it is important investors remind themselves that the effects of The Merge, possibly including the ETH to BTC price, will only be felt in the long-term:

“The gas fees will remain the same, and other scalability issues are still unsolved. The community at large must wait for Surge, Verge, Purge, and Splurge improvements to see a reduction in transaction costs and boost scalability significantly.”

“The correlation to broader asset markets is very clear, and if stocks don't recover, this will add to negative sentiment. If Ethereum goes decisively below 1,400, I think we could see a significant sell-off.”

Christensen added that the next Ethereum upgrades will be in focus:

“The most important thing is increased scalability, which will reduce fees. Until that happens, Ethereum is in effect not much use, and entirely reliant on Layer 2 solutions that provide much less security than Ethereum itself.
“Considering how difficult the Merge has been to execute, with years of delay, my personal belief that Ethereum can deliver the next stages in a speedy fashion is limited. Ethereum has one advantage and one advantage only: a very loyal ecosystem that will go through the most extraordinary and irrational hurdles, just to stay loyal. I wonder how long that will last.”

While Wallet Investor did not provide a direct ETH/BTC exchange rate forecast, the data suggests that they expected the rate to be 0.335BTC in 2023 and 0.421BTC in 2027.

Note that forecasts and analysts’ expectations shouldn’t be used as a substitute for your own research. Always conduct your own due diligence and rely on your own projections. And never trade money you cannot afford to lose.

Staking Ether: How to generate an ETH return after the Merge