What is Defi Degen Land?

Defi Degen Land (DDL) is an online metaverse operating on the Binance Smart Chain (BSC) and Cronos network that aims to merge gamification and decentralised finance (DeFi) through play-to-earn games.

According to Defi Degen Land’s whitepaper, the project was created in order to rectify the lack of gamification in the DeFi industry. The project offers a metaverse where people all over the world can participate. The project was launched in November 2021 by three anonymous individuals.

Users can earn rewards in-game through a pending pool, be rewarded in Binance-pegged BTCB for simply holding DDL and buy non-fungible tokens (NFT) within the metaverse. Unlike most other proof-of-stake (PoS) cryptocurrencies, Defi Degen Land users do not have to stake their coins.

According to the project, Defi Degen Land was created following Facebook’s announcement in October 2021 that it would be rebranding to Meta. The change was first made known to the public through a Facebook Founder’s Letter, which described the metaverse as a place that can enable better social experiences.

What is Defi Degen Land?

DDL is a deflationary token that lives on the Binance Smart Chain (BSC). Users are rewarded 10% return in BTCB for each transaction simply by holding DDL. These rewards are then distributed between holders in accordance with their share of the circulating supply. Rewards are automatically transferred to a user’s wallet depending on how many Defi Degen Land tokens they hold. Notably, users must hold a minimum of 900 DDL tokens in order to receive rewards. Every time a user purchases DDL, 15% of the total is taken as tax – the tax deducted for selling the BEP-20-compatible token is 16%.

This is because the project aims to keep a certain percentage for each DDL that’s purchased or sold. In all, 2% of every transaction is converted into liquidity for PancakeSwap through an auto liquidity pool mechanism, 10% of each transaction is rewarded to users in BTCB, and the remaining 3% is allocated to marketing. An extra 1% fee is also applied to all Defi Degen Land sales.

Each mini game in the metaverse has its own leaderboard made up of ten players who can earn weekly rewards that vary from $50 to $500. Taking inspiration from the South Korean Squid Game television show, the objective is for players in the mini game to cross a bridge and communicate with each other through a voice chat in-game function.

A red and green light determines the movements of players within the metaverse. Making it to the end of a bridge means that a user is rewarded with four points. The leaderboard resets weekly with a $100 split between the ten players:

There are currently 150bn DDL coins in circulation from a maximum supply of 300bn, according to CoinMarketCap. 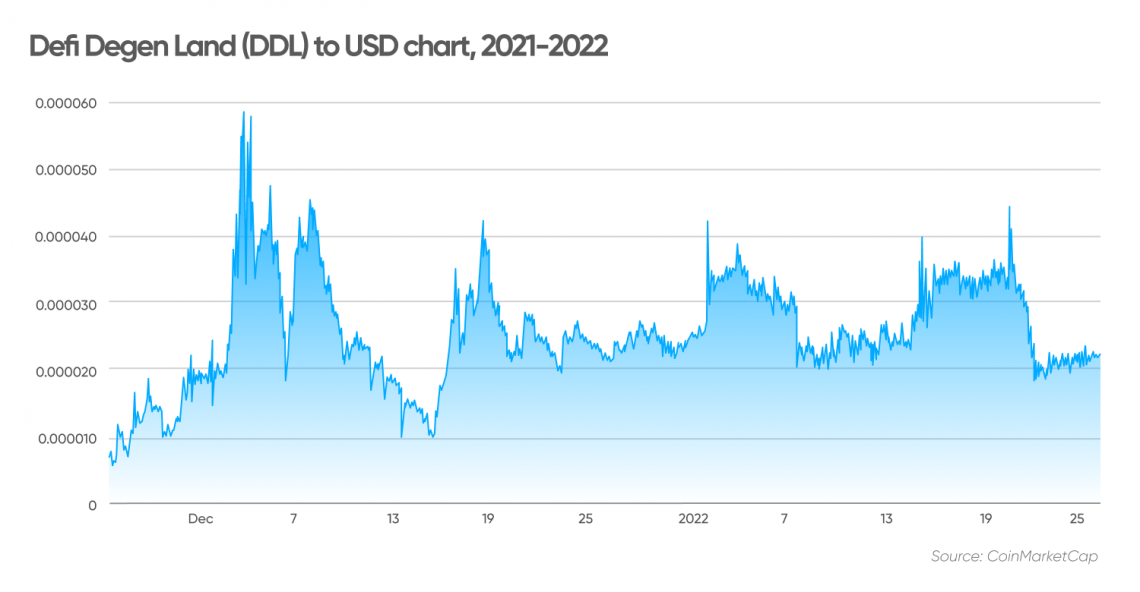 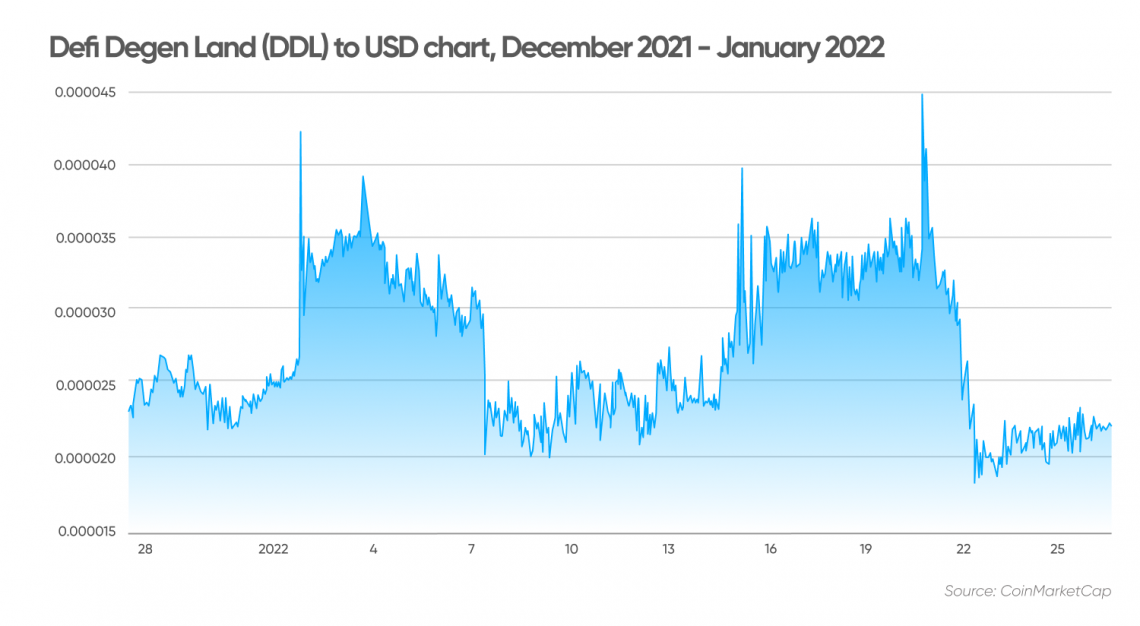 Technical analysis provided by CoinCodex showed that short-term sentiment on DDL was bearish, as of 26 January, with nine indicators displaying a bullish signal compared to 11 bearish signals. A relative strength index (RSI) reading of 48.27 is in a neutral position. A reading of 30 or below would indicate the asset is underbought or undervalued, while a reading of 70 or above would signal an overvalued condition.

A major plus for the project is that for every buy and sell transfer, 8% is redistributed to holders in BTC, who can earn tokens simply by holding DDL. Rewards are then automatically sent to users’ wallets. Defi Degen Land even offers a passive income calculator on its website for users to calculate how much they can earn through rewards.

The metaverse is at the forefront of the Web 3.0 internet evolution. Defi Degen Land may expand its digital capacities within the Web 3.0 ecosystem. It’s estimated that revenue from virtual gaming worlds could reach $400bn by 2025.

In the third quarter of 2021, total fundraising for cryptocurrency was $8.bn,  $1.8bn of which went to Web 3 and non-fungible tokens (NFT). Meta-related coins were up 37,000% last year, according to data from Macro Hive.

A risk for the project lies in the fact that Defi Degen Land’s whitepaper claims that for each transaction, users will be rewarded with a 10% return in Binance-pegged BTCB for simply holding DDL tokens. However on the Defi Degen Land website, there is mention that 8% of every buy and sell transfer is redistributed to DDL holders in Bitcoin (BTC) and no reference to the 10% BTCB return is made.

It’s unclear if BTC and BTCB are used interchangeably. Cryptodaily reports that users will be rewarded with a 10% return in BTCB for each transaction for simply holding DDL.

Defi Degen Land requested a security assessment with Certik on 1 December 2021. But there is no news as to whether the project has received its audit certificate.

“A drawback of DDL is that it is not listed on any major cryptocurrency exchanges yet.

“Defi Degen Land has expanded since its launch in November 2021, especially with their red and green light themed game – a similar concept to Netflix's popular Squid Game television show. However, a drawback of DDL is that it is not listed on any major cryptocurrency exchanges yet.”

Whether DDL is a good investment for you depends on your personal circumstances and risk appetite. Cryptocurrencies are high-risk assets. You should do your own research and  evaluate the level of risk you are prepared to accept before investing. Never invest money you cannot afford to lose.

Stellar Lumens price predictions: where next for XLM?

Terra (LUNA) coin price prediction: Can it ever recover?