Copper had a negative year in 2022, with its value falling 12% year to date as of December 8, 2022, due to slower growth in China as a result of protracted Covid lockdowns and a stronger dollar amid aggressive Fed interest-rate hikes.

After reaching an all-time high of $5.03 per pound on March 7, copper entered a bear market, plummeting 37% from its peak to mid-July lows of $3.13. Over the last months of the year, however, the metal began to recover as investors once again flocked to cyclical metals in response to a lower USD and rising prospects for a reopening in China.

Although demand and supply predictions are projected to balance out next year, copper stockpiles are at extremely low levels, implying that any unexpected consumption or production shock might cause massive price swings.

A US recession is an obvious downside risk for copper, which has traditionally performed poorly in previous US recessions. However, copper demand may increase if China's economic recovery gains steam, with restocking activity driving prices higher.

The investors' positioning in copper remains light but is improving, with large speculators transitioning to marginally net-long positions in November.

The most recent developments in the copper market may suggest that the potential upside for 2023 is slightly greater than the downside at this point.

Breaking over the $4.00 resistance level will be critical in establishing a new price floor for next year.

Copper may retest June 2022 highs of $4.50-4.57 during H1 2023 under the most optimistic scenario of a successful reopening in China and a US economy’s soft landing with lower Fed interest rates. A bumpy path to reopening in China and a more hawkish-than-expected Fed might be a big disappointment for bull hopes, making the $4-4.20 region a difficult obstacle to overcome, with prices seeking to find support at a lower level ($3.50). 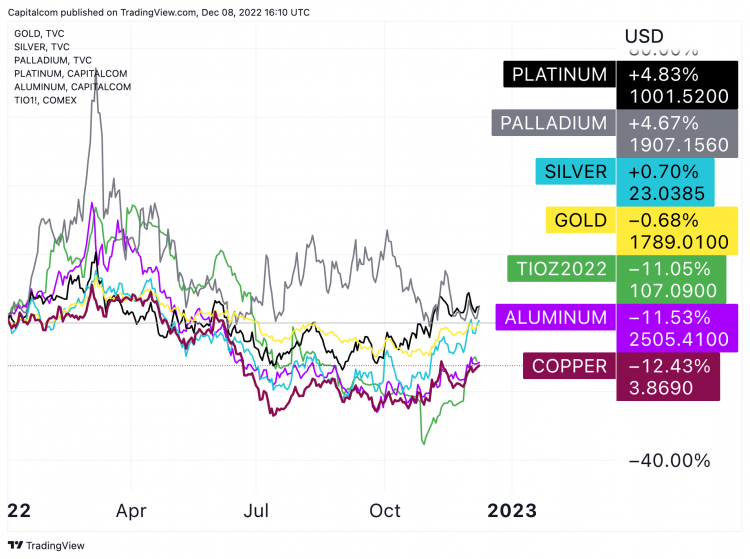 Copper actually had a good start in 2022, as it was buoyed by the final leg of the 2021 Covid-reopening bull market, reaching all-time highs of $5.03 per pound in March.

Bearish risks, however, were only hiding, and they were about to blow up.

China was the epicenter of the copper crisis in 2022, as the country faced both a resurgence of Covid cases, which prompted authorities to tighten lockdowns once again and a domestic real estate crisis, with giant developers like Evergrande defaulting on their foreign obligations.

Copper prices went particularly under pressure in the second quarter of the year, when China announced anti-Covid restrictions and the Fed began its rate rise cycle. Copper prices dropped 20% in Q2 2022, marking the fourth lowest quarter in history. Copper prices bottomed out at $3.13 on July 15, 2022, before slowly recovering in the third quarter.

The copper price rebound has accelerated since early November on the strength of rising optimism of a reopening in China, after the government's decision to decrease quarantine days and eliminate COVID testing requirements for some outdoor activities.

The simultaneous weakening of the dollar due to predictions of a Fed policy reversal in 2023 and the possibility of rate reduction in the second half of the year also aided to the rise in the cyclical metal.

Copper demand and supply dynamics for 2023: Tightness building up 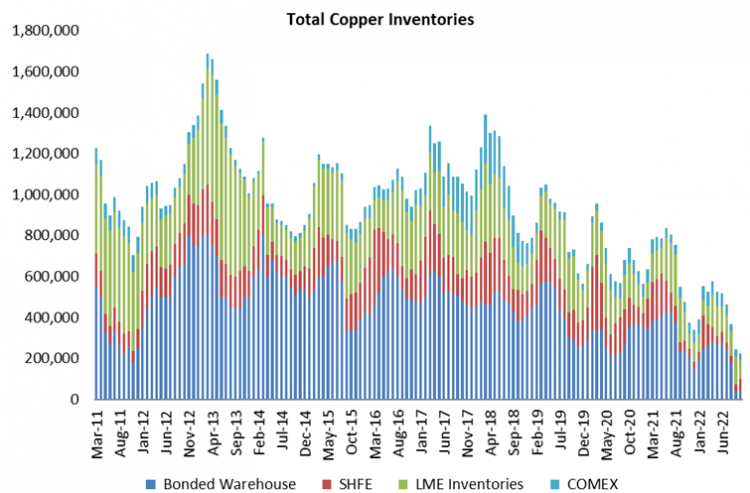 According to the most recent Fitch ratings, global primary copper demand is predicted to rise by approximately 2% in 2023, similar to 2022, while copper mine production is expected to rise by around 4%.

Aside from the forecasts about copper supply and demand for 2023, the actual fact is that the copper market will enter the year 2023 in an unprecedented condition for the post-2000 era, with nearly depleted stockpiles globally.

LME warehouses hold only two days of world copper use, while inventory levels on both the SHFE and the COMEX are perilously low as well. Commodity trader Trafigura has recently issued a warning that copper supplies worldwide are at an all-time low, with only 4.9 days' worth of consumption available.

Because of the extremely low levels of copper inventories across the world, the market is thus dangerously exposed to sudden demand or supply shocks.

On the demand side, if China's economic recovery gains traction, restocking will occur, increasing physical demand for copper.

Regarding the supply, it's critical to keep an eye on the most recent political developments in South America, particularly in Chile and Peru, which together produce 40% of the world's copper and account for half of world’s export of the brown metal. Workers' protests and strikes might halt production at a time when demand is on the rise and global copper stockpiles are at an all-time low. This might produce the ideal ingredients for a copper bull market.

However, if the US economy enters a recession, the surge in global copper demand would be mitigated, putting downward pressure on prices. 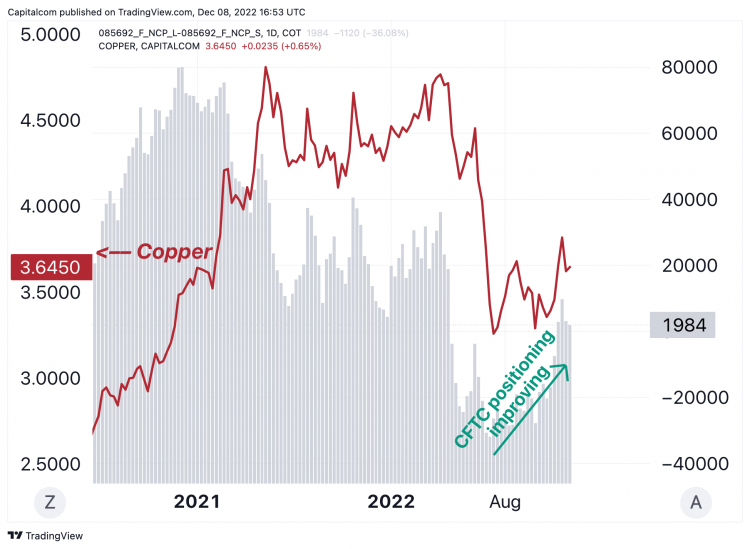 Large non-commercial traders have been net short on copper from the fourth week of April to the end of October, with net-short contracts reaching a low of -31.3K in July.
Since then, speculators have started to cut back on their net short bets on copper, and in November, positioning became net bullish. This change has also been an important driver behind the copper rebound lately.

Still, it's a rather light bullish position, far from the extreme bullishness on copper seen at the end of 2020, and the brown metal doesn't appear to be a crowded or a bullish consensus trade for next year, which is a plus for medium/long term investors seeking to enter a relatively clean market.

A significant bullish trigger for copper that might materialise in 2023 is the Chinese economic rebound as the nation reopens from the Covid lockdown.

Copper is the engine of global growth, but it is especially sensitive to the economic momentum in China, the world's largest consumer of copper, which accounts for half of worldwide consumption.

As a result, the consumption of the metal will get a significant windfall in the event that growth is picking up in China. The Chinese Caixin PMI, which is associated with the dynamics of copper prices, is an indicator to keep a watch on for advancement in Chinese economic activity. 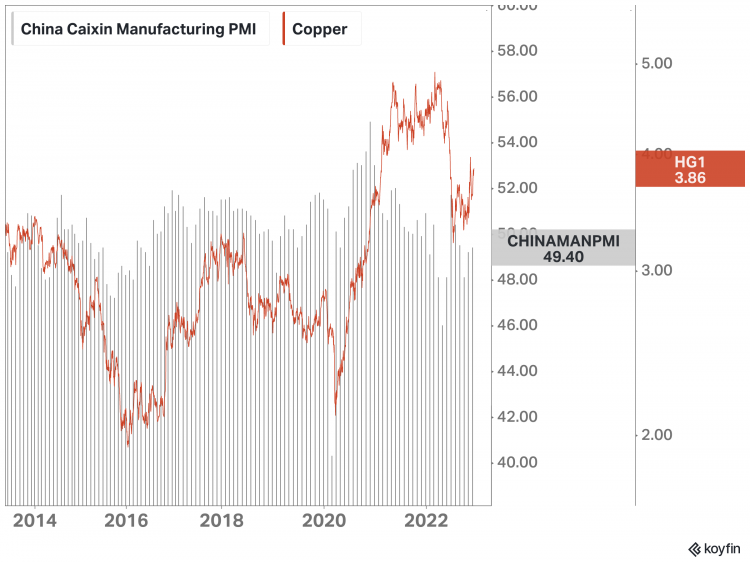 The increase in electric vehicle (EVs) investments is a second big positive factor for copper.

Copper is the most important raw material for electric vehicle production, and with the green transitions investments picking up steam, copper demand will rise in tandem with the rapid shift toward renewables and EVs.

Copper prices have a strong and positive link with the performance of EV equities as gauged by the Global X Autonomous & Electric Vehicles ETF (DRIV).

However, this is more of an underlying long-term factor for copper, which may play out over the next decade rather than specifically next year. 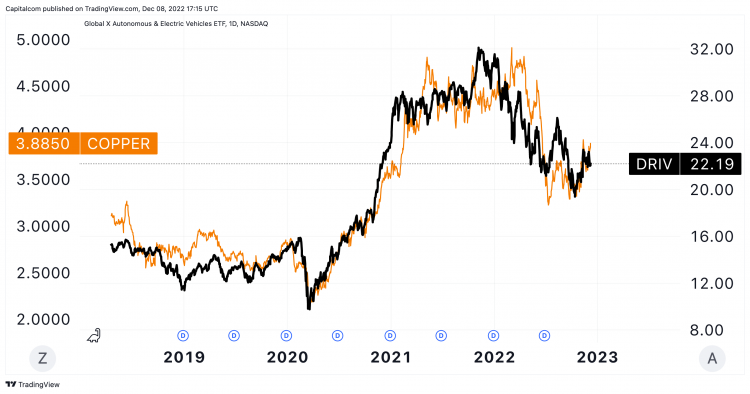 If the United States enters a recession in 2023, copper might be exposed to significant downward pressure.

Copper has typically mirrored the performance of the manufacturing PMI in the United States, which is indicative of the health of industrial sector activity.

Copper has delivered dramatic drops in prior US recessions, marked by a sudden decline in US manufacturing activity. The latest reading (49) already pointed to a contractionary activity for the industrial sector, thus if this trend were to continue next year it could negatively affect copper.

However, the relationship between the two has recently deteriorated, as copper prices climbed despite a steep slowdown in US ISM PMI, suggesting that the metal is now more closely following Chinese economic prospects than US ones. 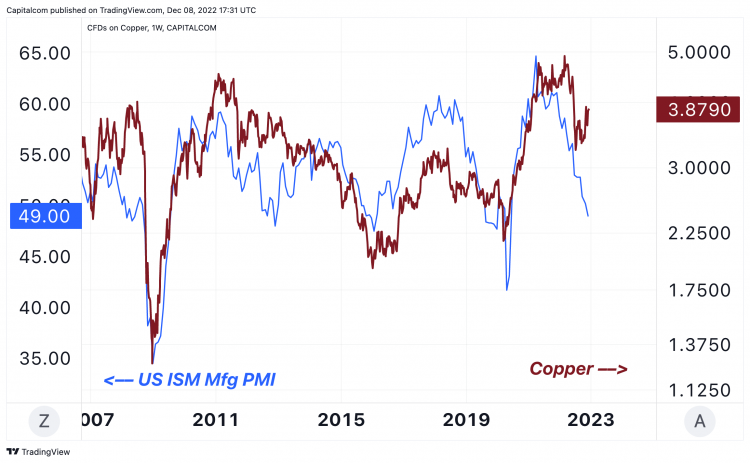 Copper's downward pressure might intensify if, concurrently with a recession, inflationary pressures persist, compelling the Fed to maintain interest rates higher for an extended period of time and forcing the dollar to gain.

In reality, there is a substantial and negative association between the performance of the US dollar index (DXY) and the brown metal.

If the Fed proves to be more hawkish than market estimates, which call for the terminal rate to peak at 4.9% in May 2023, followed by 50bps of decreases until December 2023, copper prices might continue to suffer headwinds from a stronger dollar, all else being equal. 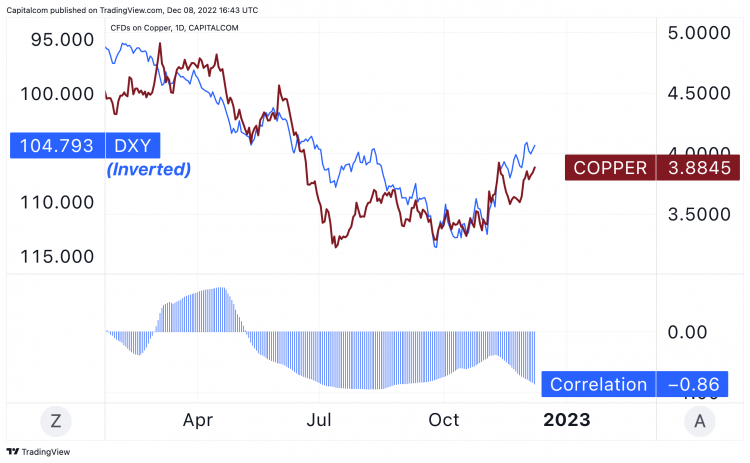 A stronger US dollar is a headwind for copper prices – Photo: Capital.com, Source: Tradingview

Copper technical analysis and 2023 price forecasts: Is $4.00 the new floor? 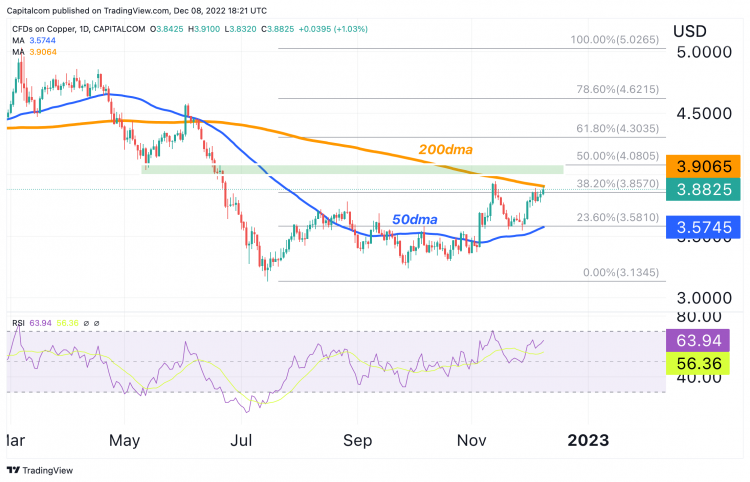 After weighing the bullish and negative factors discussed above, it appears that the bullish factors might have a slightly higher chance of materializing in 2023, which might tip the balance toward a more optimistic prediction of copper price trends.

On the daily copper chart, we can see that prices are now testing the 200-day moving average at $3.88, which also corresponds to the 38.2% Fibonacci retracement between the lows and highs of 2022. The $3.94 mid-November peak is likewise not far from this barrier.

If this resistance level is breached, there is a good possibility that the price of copper will find a new floor in the $4.00-4.10 range in the first quarter of 2023. Back in May 2022, this area functioned as the first support of 2022, but in June got broken as the bear market intensified.

Copper's $4.08 price milestone would be significant from a technical perspective since it coincides with the 50% Fibonacci retracement level of the low-to-high range in 2022.

Copper's chances of hitting the $4.00 zone and shattering it increase the sooner China announces an economic openness. $4.62 might be an intriguing bullish target for the first half of 2023, as it would represent a 78.6% retracement of the range of 2022.

If the scenario doesn't play out as expected and copper retraces to the downside, the $3.50–3.58 support area, if reached, may likely reinstate bull buying action on dips. Copper traded at these levels when Chinese authorities first announced efforts to ease Covid restrictions in November.

A fall to $3.5 or below would signal a complete reversal of Chinese authorities' attempts to unlock the economy and a broader dollar surge on the basis of fresh hawkish fears from the Fed, and thus a retest of such levels seems to have fewer probabilities at this time.

Natural Gas 2.721
Trade
-4.380%
Oil - Crude 78.63
Trade
-0.840%
Gold 1925.06
Trade
-0.110%
Oil - Brent 85.33
Trade
-0.710%
Silver 23.646
Trade
+0.460%
The difference between trading assets and CFDs
The main difference between CFD trading and trading assets, such as commodities and stocks, is that you don’t own the underlying asset when you trade on a CFD.
You can still benefit if the market moves in your favour, or make a loss if it moves against you. However, with traditional trading you enter a contract to exchange the legal ownership of the individual shares or the commodities for money, and you own this until you sell it again.
CFDs are leveraged products, which means that you only need to deposit a percentage of the full value of the CFD trade in order to open a position. But with traditional trading, you buy the assets for the full amount. In the UK, there is no stamp duty on CFD trading, but there is when you buy stocks, for example.
CFDs attract overnight costs to hold the trades (unless you use 1-1 leverage), which makes them more suited to short-term trading opportunities. Stocks and commodities are more normally bought and held for longer. You might also pay a broker commission or fees when buying and selling assets direct and you’d need somewhere to store them safely.
Capital Com is an execution-only service provider. The material provided on this website is for information purposes only and should not be understood as an investment advice. Any opinion that may be provided on this page does not constitute a recommendation by Capital Com or its agents. We do not make any representations or warranty on the accuracy or completeness of the information that is provided on this page. If you rely on the information on this page then you do so entirely on your own risk.