The Chinese yuan (CNY) has weakened against currencies such as the US dollar (USD), euro (EUR) and Australian dollar (AUD) as China’s zero-Covid-19 policy has resulted in widespread lockdowns and disruptions to the economy.

At the same time, the People’s Bank of China (PBoC) has cut interest rates while other countries’ central banks have hiked theirs.

The CNY is trading above 7 to the US dollar, the first time since July 2020, based on the Chinese yuan historical chart. 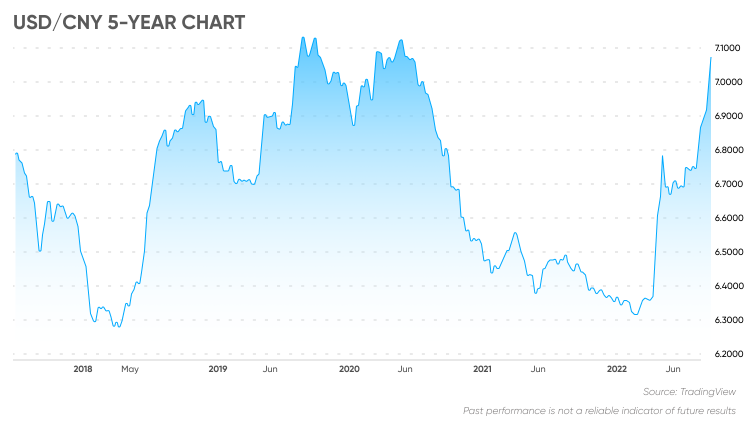 Will this weakness continue or will the CNY rebound? What drives the value of the renminbi and what is the outlook for the currency in the future?

In this article, we look at the latest performance and Chinese yuan predictions from analysts.

What drives the value of CNY?

The renminbi (RMB) is the official currency of China. The term yuan refers to a unit of the currency. There are two types of renminbi: the CNY, which can only be traded in mainland China; and the CNH, which is known as the offshore yuan and can be traded on international foreign exchange markets.

The CNY is regulated by the Chinese government through the PBoC and the State Administration of Foreign Exchange (SAFE). The PBOC sets the daily reference rate for the CNY, which can only fluctuate within 2% of its value.

The CNH is regulated by the Hong Kong Monetary Authority and trades freely on currency markets, fluctuating against other currencies. The CNY price trades at different exchange rates to the CNH, but the CNY and CNH are always exchanged at a ratio of 1:1.

The offshore yuan CNH gives access to overseas individuals and businesses to the renminbi and the world’s second largest economy by gross domestic product (GDP).

The Chinese economy slowed down in March and April amid extensive Covid-19 lockdowns. It remains under pressure from the country’s zero-Covid policies, problems in the real estate sector and slowing growth in the global economy.

The PBoC announced on 5 September that it would reduce the reserve requirement ratio for foreign currency deposits from 8% to 6%, effective from 15 September. That came after a 100-basis point cut in May.

With central banks around the world raising interest rates this year, led by the US Federal Reserve (Fed), the CNY has fallen against other currencies. Countries with higher interest rates tend to attract higher inflows of foreign investment, increasing demand for their currencies. The rapid rise in US interest rates and the US dollar’s status as a safe haven asset have seen it climb to 20-year highs against a basket of currencies in the Dollar Index (DXY). That has resulted in the CNY trading above 7 to the dollar, up from around 6.75 in mid-August and 6.36 at the start of 2022.

The latest economic data showed that China’s second-quarter GDP increased by just 0.4% year on year in the second quarter, after rising by 4.8% in the first quarter. The August consumer price index (CPI) rose by 2.5% year-on-year, down from 2.7% in July. August industrial production increased by 4.2% year on year, up from a 3.8% increase in July. But the Caixin manufacturing purchasing managers’ index (PMI) slid to 49.5 from 50.4 in July, with a number below 50 pointing to a contraction in activity.

What does that mean for the value of the CNY?

Below we look at some forecasts from foreign exchange analysts.

Chinese yuan forecast: Will the CNY remain under pressure?

“Although the main economic indicators of the mainland showed positive changes in August, the volatility of the RMB exchange rate may increase due to the strength of the US dollar,” noted analysts at Hong Kong-based Hang Seng bank.

According to analysis from UK currency exchange firm Monex, their “expectation of narrowing rate differentials and a slowing in the Chinese economy driven in large part by China’s Zero-Covid policy has led us to be bearish on the Chinese yuan since February. This has only been emboldened by the PBoC’s decision to ease the 1-year medium-term lending facility rate in August amid a housing-led slowdown in the economy and signs of further Covid restrictions being implemented as case counts continue to rise.

“However, the recent actions by the PBoC to push back against CNY depreciation suggest that downward pressure is likely to ease unless widespread lockdowns are implemented ahead of the National Congress in October.”

Policymakers’ desire to slow the rate of CNY depreciation could be supported by additional fiscal stimulus measures, which could be announced later this year to prop up domestic growth. That should also offer a modicum of support to other currencies in the APAC region with high exposure to Chinese growth conditions.

According to a CNY forecast analysis by Sweden-based SEB Group: “The resilience of the trade-weighted RMB Index over the month of August suggests that most of the upmove [sic] in USD/CNY has been dollar-driven. The clear monetary policy divergence will keep the yuan exposed to broad dollar moves. If the greenback were to get a fresh leg up once again, we would expect the PBoC to revert to familiar tools that would limit yuan weakness. An uncontrolled depreciation of the currency is unlikely to be welcomed as we get nearer to the Communist Party Congress. The twice-a -decade leadership congress will begin on 16 October, following the plenum that will be held from 9 October.”

The analysts added: “Despite the dominance of the greenback, a strong trade balance will allow USD/CNY to pull back to 6.85 by end-2022. Even with the difficulties due to shifting lockdowns, China’s exports have remained surprisingly robust. Exceeding USD 100 billion in July, the trade surplus year-to-date has widened to USD 492 billion compared to USD 314 billion over the same period in 2021. Moreover, onshore positioning will eventually slow down the yuan’s decline.”

Analysts at Malaysia-based Maybank were cautious in their Chinese yuan forecast: “We still think the worst of yuan weakness could be seen within these few months as China battles with power crunch, growth-stifling effects of its zero-covid strategy and its property slump. There is still a faint possibility that zero-Covid strategy could be shifted in a more significant way after President Xi gains his third term in 4Q and that is when some recovery can be expected from the yuan.

“In the meantime, apart from growth concerns and capital outflows, USDCNY could also be influenced by broader USD cues – stronger US data, sticky inflation could increase the likelihood of larger rate hike in Sep and that could continue to underpin the greenback. Even as USD bulls can pause on softer data and slower rate hikes, the greenback also enjoys safe haven demand as high energy prices and inflation slows global demand.”

The Chinese yuan forecast for 2022 from French bank Societe Generale suggested that the USD/CNY pair could trade up to 7.10 by the end of the fourth quarter, averaging 6.68 for the year. But the bank’s Chinese yuan forecast for 2025 indicated that the CNY could strengthen over the next few years to move the USD/CNY pair down to an average of 6.30.

At the time of writing (23 September), analysts saw the potential for continued short-term weakness in the value of the renminbi against the euro. The Chinese yuan price forecast from Trading Economics indicated that the EUR/CNY pair could trade at 6.95512 by the end of this quarter but move down to 6.85470 in one year, based on global macro model projections and analysts’ expectations.

The Chinese yuan forecast against the euro from Dutch bank ING predicted that the EUR/CNY pair could trade at 7.05 in one month, but decline to 6.78 in six months, before moving back up to 6.85 in 12 months.

When consulting any Chinese yuan forecast, it’s important to remember that currency markets are highly volatile, making it difficult for analysts to make accurate long-term predictions. We recommend that you always do your own research. Look at the latest market trends, news, technical and fundamental analysis, and expert opinion before making any investment decision. Keep in mind that past performance is no guarantee of future returns. And never invest money you cannot afford to lose.