In August, China’s central bank cut its benchmark lending rate for the second time in 2022.

The world’s second-largest economy has been forced to ease monetary policy due to economic growth stagnation, rising unemployment, poor credit growth and a property sector crisis.

The latest economic data from July painted a gloomy picture. The numbers indicated that the slowdown has spread to China’s manufacturing sector. Furthermore, analysts noted that the country’s regulators are becoming increasingly worried about youth unemployment reaching record high levels.

What does this mean for China’s interest rates? Will the Chinese central bank maintain its contrarian monetary easing policies for the rest of the year? Find out below and read China interest rate forecasts from economists and analysts.

About the People’s Bank of China

The People’s Bank of China (PBOC) is the central bank of China. It was established in December 1948 following the consolidation of the Huabei Bank, the Beihai Bank and the Xibei Farmer Bank. In September 1983, the State Council decided to have the PBC function as a central bank

The PBOC is responsible for implementing interest rates in China, issuing the national currency and regulating financial markets.

The bank uses various instruments to conduct monetary policy. According to the International Monetary Fund (IMF), the four main policy instruments of the PBOC are the required reserve ratio for banks (RRR), bank deposits and lending rates, the medium-term lending facility rate (MLF) and the seven-day reverse repo rate.

In 2019, the PBOC introduced the loan prime rate (LPR) system, which required all loans to reference LPR, thereby making it the benchmark lending rate for Chinese banks. This policy reform elevated the importance of the MLF rate, as the LPR was linked to it.

What is your sentiment on USD/CNH?

Give USD/CNH a try 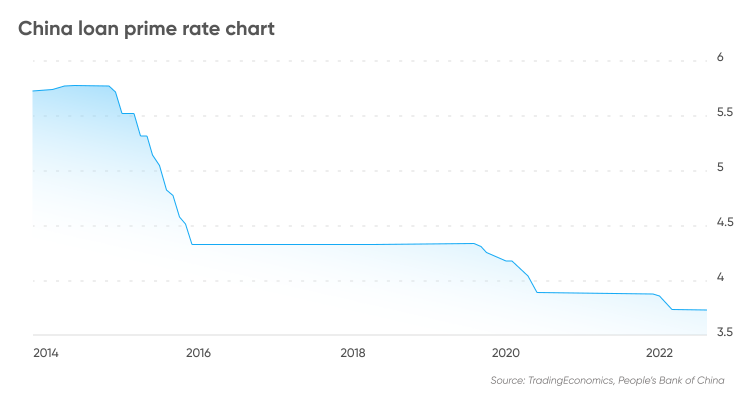 The China interest rate data compiled by data provider Trading Economics shows that the benchmark one-year LPR was about 4.3% throughout 2018 and mid-2019. Since then the PBOC has conducted a series of interest rate cuts in China to take the one-year LPR to 3.7%, as of 18 August 2022.

The PBOC cut rates aggressively from the second-half of 2019 up to April 2020. The PBOC tweaked its monetary policy in the second half of 2021 to support Chinese corporations hurt by a deleveraging drive and Covid-19 restrictions.

In August 2021, the PBOC resolved to cut RRR by 50 basis points (bps), which lowered the reserves required to be held by banks and increased liquidity in China’s financial system. However, the central bank opted to keep China’s interest rates steady.

The central bank conducted its second 50 bps RRR cut of the year in December 2021 which released about CNY1.2trn ($176bn) from bank reserves into the financial system.

A third RRR cut followed in April 2022 as the PBOC cut reserve requirements for banks by 25 bps to take RRR levels to their lowest since 2007, according to DBS Group Research.

China’s one-year MLF rate and seven-day reverse repo rate were cut by 10 bps each in January 2022.

On 15 August 2022, sluggish economic growth data amid renewed Covid-19 outbreaks in China forced the PBOC to cut rates for the second time in the year. The one-year MLF rate and seven-day reverse repo rates were cut by 10 bps to 2.75% and 2%, respectively.

As of August 2022, inflation in China has not risen to the alarming levels that have forced several central banks across the world to end accommodative monetary policies in an effort to lower cost pressures.

The controlled levels of inflation in China have allowed the PBOC to cut interest rates in contrast to monetary tightening cycles seen elsewhere in the world.

The latest CPI data for July showed that inflation rose to a two-year high of 2.7% on the back of rising pork and fuel prices.

Analysts at ANZ Research noted that inflationary pressures in China will be transitory:

2022 has seen a continued rise in youth unemployment in China. Frequent lockdowns in Chinese cities due to the nation’s zero-Covid policy has hurt the nation’s services sector.

According to Bank of America research, the unemployment rate of those aged between 16 to 24 in China rose to a record-high of 19.9% in July.

ANZ Research analysts noted that the focus of the PBOC will be on employment and any upcoming inflationary pressure is “unlikely to change the current monetary policy stance.

“Considering the recent influx of new graduates into the market, we expect the surveyed jobless rate to have rebounded to 5.7% in July. So it is still not a good time for the PBoC to start normalising.”

The latest economic data from July indicated a broad-based weakness in the Chinese economy as the slowdown in growth spread from services to the manufacturing sector.

Year-on-year (YOY) industrial production growth in July came at 3.8%, below analyst expectations of 4.3% and 3.9% from a month ago.

July fixed-asset investment growth in China fell to 5.7% YoY, down from the 6.1% reported a month ago. July retail sales growth dropped to 2.7% YOY, lower than the 3.1% reported in June.

“The data underscore domestic demand weakness, as businesses cope with Covid restrictions and the property market turmoil hurt household confidence. This adds to the urgency of stepping up easing measures to stabilise growth,” said BofA Securities in a note.

The PBOC cut one-year MLF rates by 10 bps in August to stimulate lending and business growth in response to weak economic data.

The Chinese property sector has been reeling under pressure since Chinese authorities began a deleveraging drive as part of President Xi Jinping’s “common prosperity” agenda.

Debt-ridden property companies have been facing bankruptcy and collapse since 2021 as free-flowing credit taps were turned off by regulators.

Consumer confidence in China has hit rock-bottom after several real estate companies failed to deliver on their housing commitments. China has seen a “mortgage boycott” across the country as many consumers have stopped making payments on stalled properties. According to DBS Research, over 200 projects have been affected by the boycott.

“Compounding the problem, housing and affiliate industries that are contingent on property holdings, ownership, and distribution altogether account for 25-30% of China's GDP. Falling sales and construction as a result of a growing boycott will hamper the real economy by weakening upstream and downstream activities,” said DBS.

Analysts expect the PBOC to maintain its dovish stance given the country’s weak economic growth and property sector risks.

BofA Securities noted that the PBOC’s 10 bps rate cut in August could be “too little, too late” given the “extremely weak” credit demand in China.

“In our view, the PBOC has to make this gesture to show it cares about growth, without committing to more cuts. Given more Fed rate hikes on the way, the PBoC will likely have to watch cross-border capital movement closely to decide if it will use the rate tool again in the near future,” said BofA Securities.

“In our view, however, the impact of all the stimulus pledged so far is fairly limited. A small interest rate cut is insufficient to boost domestic demand, letting alone the current policy rate has stayed below market rate for quite a while.”

Elsewhere, Singapore’s DBS Research said in a note published on 15 August 2022 that it expects a 20 bps cut in one-year LPR and MLF in the next four months.

DBS and ANZ Research expected the PBOC to cut RRR by 50bps in the near future.

Note that Chinese interest rate forecasts can be wrong. Forecasts shouldn’t be used as a substitute for your own research.

Always conduct your own due diligence. Remember that your decision to trade or invest should depend on your risk tolerance, expertise in the market, portfolio size and investment goals. And never invest money that you cannot afford to lose.