CEEK VR price prediction: How high will the coin trade in the future?

CEEK VR price prediction: Is the metaverse coin a buy?

The CEEK VR cryptocurrency staged strong rallies in November and December, and is attempting to hold the gains at the start of the new year.

CEEK VR is one of the metaverse coins that have soared in value with the emergence of new applications and Facebook’s rebranding as Meta Platforms. The metaverse is expected to be a key theme for cryptocurrency and technology investors in 2022.

Where does CEEK VR fit within the metaverse trend? What is CEEK VR and how is the price expected to move in the future? Let’s take a look at the coin and the latest price forecasts.

CEEK was founded in 2015 by Mary Spio, a US Air Force veteran and deep space engineer with more than 10 technology patents. Spio has previously held technical leadership roles at Boeing and Intelsat. CEEK has raised a total of $7.2m in financing over three rounds, the most recent of which was in January 2021, according to Crunchbase.

Tokenisation of smart tickets as non-fungible tokens (NFTs) allows content creators to track and verify sales on the blockchain ledger and ensure they receive royalty payouts.

Holders of CEEK VR tokens can vote to approve which sponsors can bid on naming rights for venues in the CEEK City metaverse, according to the project’s whitepaper. CEEK City offers immersive VR experiences in its theatre, concert arena, sports complex, hangout lounge and other venues. A percentage of the sponsorship fees are distributed to token holders who participate in the votes.

While CEEK VR initially launched on the Ethereum blockchain, it moved to Binance Smart Chain (BSC) in 2021, converting all its tokens from the ERC-20 standard to BEP20 to reduce transaction costs.

“BSC provides a blockchain network that is more efficient, and less costly than Ethereum, making it easier for CEEK to scale our metaverse in ways we cannot yet even imagine,” the developers said. CEEK will continue to support ETH in its NFT marketplace.

CEEK provides a cross-platform standard so applications are not locked to a specific VR device. They can be written once and run on any VR system. Investment firm Citibank estimates that the VR market will be worth $1trn by 2035, according to the whitepaper. CEEK expects music to drive VR adoption, with live events accounting for 49% of global music spend.

Analysts at investment bank Goldman Sachs estimate the total addressable market of the metaverse anywhere between $2.6trn and $12.trn based on the value of the global digital economy at around $15trn in 2021, according to a December report.

CEEK’s market capitalisation was around $526.2m at the time of writing (3 January) with the price at $0.70, data from CoinMarketCap showed. That ranked it as the 139th largest cryptocurrency and the 8th largest metaverse-focused coin. 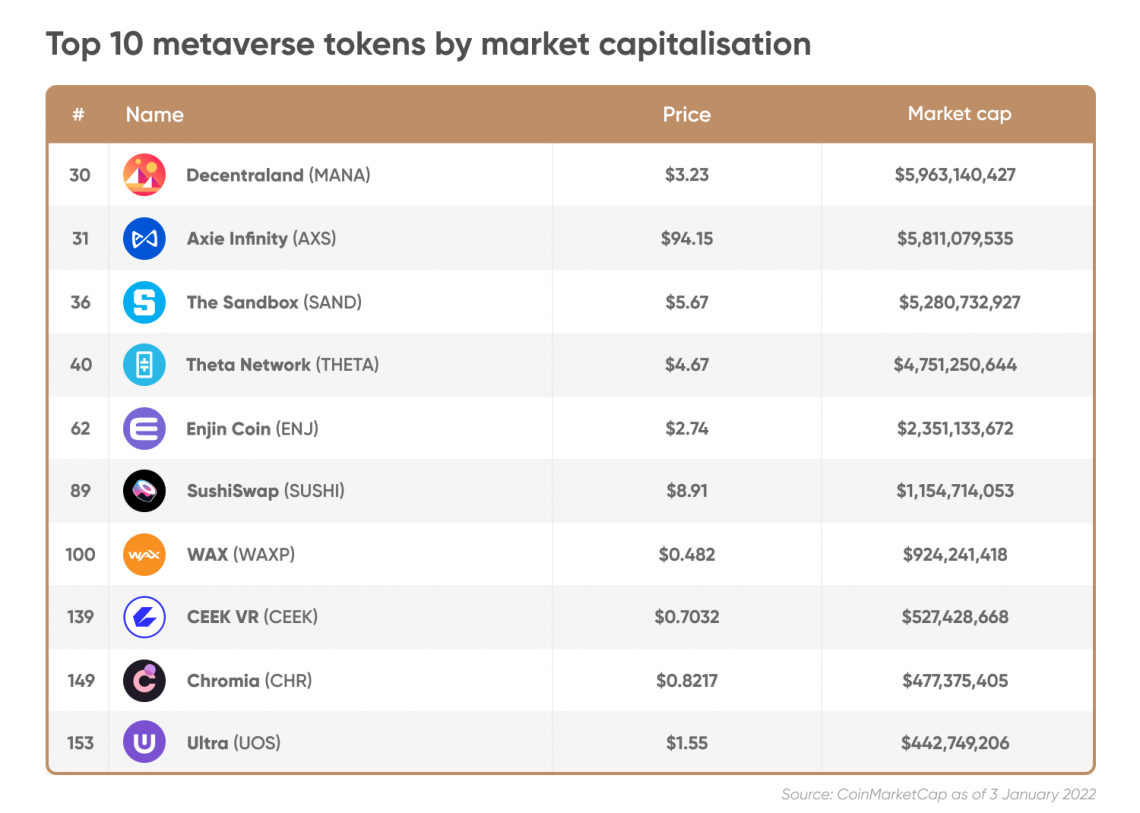 Other metaverse coins such as Axie Infinity and Sandbox also rallied at that time, after Facebook announced its rebranding as Meta Platforms on 28 October.

What is the outlook for the CEEK VR price in 2022?

CEEK VR price prediction: How high will the coin trade in the future?

Technical analysis from CoinCodex was bullish at the time of writing on 3 January, with the price around $0.70. There were 22 indicators giving bullish signals compared with seven bearish signals.

Algorithm-based forecasting site WalletInvestor in its CEEK VR token price prediction estimated that the price could slip to the $0.67 level in February, but then trend higher for the rest of the year to reach $1.108 by the end of December.

We recommend that you always do your own research, and consider the latest CEEK VR news, market trends, technical and fundamental analysis, and expert opinion before making any investment decision. Keep in mind that past performance is no guarantee of future returns. And never invest more than you can afford to lose.