Bitcoin price prediction: will it surge to $100k?

According to CoinMarketCap, Bitcoin started the year at just under $29,000 on 1 January 2021 and surged to its latest all-time high of $64,863 on 14 April, a huge increase of 123%. Although bitcoin (BTC) is inherently a highly volatile cryptocurrency, increased adoption rates among institutional and retail investors, together with positive analysts’ views and commentaries, make bitcoin believers ‘hodl’ (hold on for dear life). Bicoin disciples are waiting for BTC to climb even higher, despite a massive pull back of 54% to $29,600 in July 2021 and a subsequent rebound to $47,670 in August 2021.

Bitcoin skyrocketed to almost $65,000 mid-April, driven by the news that the major US bitcoin and cryptocurrency exchange Coinbase was to debut on the NASDAQ exchange, but the hype calmed down once the Coinbase IPO passed and its share price fell.

Another bitcoin news-maker was Elon Musk, of electric vehicle (EV) maker Tesla. His Twitter comments helped bitcoin to reach a $1trn market capitalisation this year. The Tesla billionaire continued teasing the cryptocurrency market with the question “What does the future hodl?” 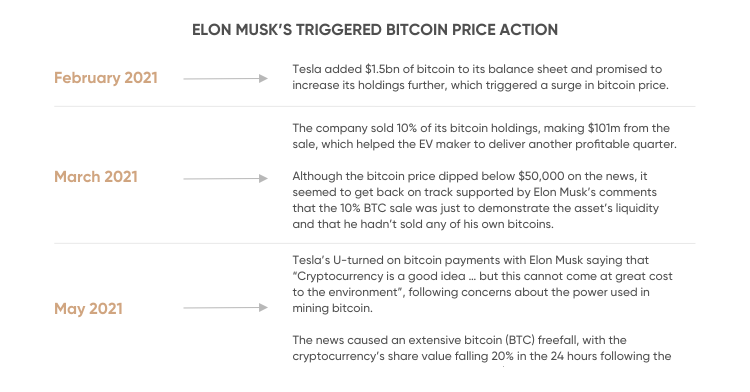 The crypto market fell quite dramatically in May, going sideways for almost three months against the backdrop of crypto bans in China. However, the range of the sideways market was very wide, from $30,000 to $42,000.

Breaking through those levels to one side or the other would form a further medium-term trend. Going below $30,000 would have led the market to a new crypto-winter, going back above $42,000 to a recovery and continuation of the growth cycle.

“The recent strength in bitcoin has seen it break out of the sideways range the cryptocurrency has been stuck in since the end of May. Break-outs are normally considered positive and can suggest a new trend is starting. It is early days for the break but at the moment the next target for me would be for a run to the mid-May highs ahead of $52,000. Looking forward, I would say if it manages to hold onto the $50,000-plus area, then a run back to the all-time highs at $64,000 is the next target.”

What else is driving the bitcoin price? Common triggers to consider when trading bitcoin include:

Bitcoin price adheres to the general law of supply and demand. Bitcoin supply is often compared to gold, as there are a limited number of bitcoins that can be mined – only 21 million. The demand side here works the same as with any other asset: the more investors are willing to enter the bitcoin market, the higher the bitcoin price.

Media hype is the most important source of influence on the price of bitcoin and other cryptocurrencies. Publicity may not increase  people’s understanding but it does drive investors’ interest. With the news – or gossip – spreading like wildfire, the BTC price can be significantly hit by the mass hysteria.

The influx of institutional investors and PayPal’s adoption of the cryptocurrency lend bitcoin further legitimacy as it spreads inside the traditional financial system. According to a guidance from the US Office of the Comptroller of the Currency (OCC), national banks are allowed to use stablecoins for payments, settlements and take part in blockchain networks, contributing to further legitimisation of digital currencies.

While bitcoin’s rally in 2017 was fuelled mostly by passionate retail crypto enthusiasts, the latest bitcoin trend was sparked by public companies, including MicroStrategy and Square, investing millions of dollars in bitcoin (BTC). It opened the door to other companies viewing it as a viable reserve asset.

MicroStrategy ignited a chain reaction, acquiring $425m worth of BTC in August 2020. Square followed with its $50m investment in October. And PayPal became the cherry on top, allowing hundreds of millions of users to buy, hold and sell bitcoins. Institutional investors, fearing they will miss out on big returns, have pumped billions of dollars into the crypto market, playing a significant role in bitcoin’s meteoric rise.

"People are seeing a move to it as a reserve asset, knowing there's a limited supply of bitcoin, and saying, 'okay, I want my piece of it before it goes too high in price," said Jimmy Nguyen, president of the Bitcoin Association.

The instability of central bank currencies boosts people’s interest in alternatives, such as bitcoin and altcoins. Bitcoin, keeping the leading position in the cryptocurrency market, has become the crypto of choice for many investors.

The coronavirus pandemic has also contributed to positive bitcoin price predictions. As governments of many countries injected trillions of dollars into fiscal stimulus and eased monetary conditions, bitcoin rose in value as a hedge against inflation. JP Morgan analyst Nikolaos Panigirtzoglou expressed the view that bitcoin’s limited supply of 21 million and immunity from political decisions make it an attractive hedge asset as an alternative to gold.

Bitcoin price fluctuations may also be affected by the bitcoin community in its effort to reach consensus regarding bitcoin’s future development. The decisions influence the Bitcoin blockchain and the entire Bitcoin ecosystem. Lack of consensus can lead to a hard fork or split in a blockchain, which is how Bitcoin came to be separated into two separate blocks – Bitcoin and Bitcoin Cash – each following different rules.

According to the latest bitcoin sentiment report by sentix as of 15 August 2021, bitcoin  is enjoying the best sentiment since mid-April 2021. This big shift in opinion is related to the turnaround in the cryptocurrency market. Just a month ago the market was still bearish, now the bulls are trying to regain the old highs. However, high sentiment levels could also be a warning sign, as the market might need to take a breath before conquering the next major resistance level at $50,000 again.

The Crypto Fear & Greed Index for bitcoin, which analyses emotions and sentiments from various sources, is at its highest level since 21 July 2020, hitting the “greed” territory. 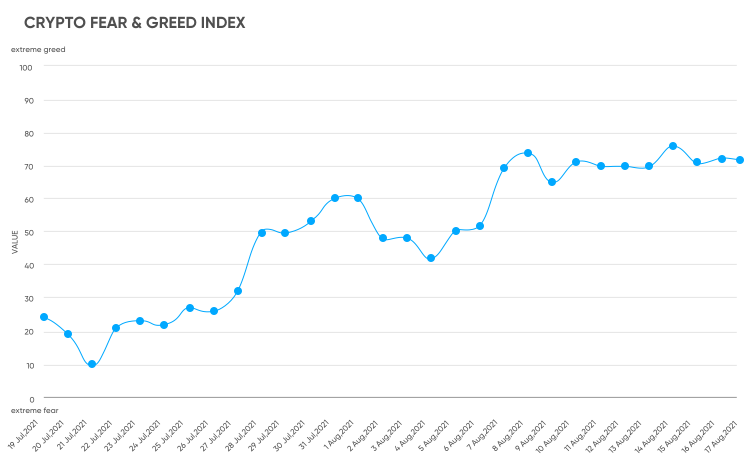 Usually, when the bitcoin price rises, people do not want to miss the opportunity and are motivated by greed. On the other side of the coin, when the cryptocurrency’s price starts declining, investors become irrationally fearful, which could result in a BTC sell-off.

So when the level of greed (overly bullish sentiment) is high, the market might move towards a correction. Otherwise, a high level of fear could serve as a potential buying opportunity.

Summing up, traders sentiment looks bullish from a long-term perspective, but potential crashes may occur down the road.

Since its inception in 2009, the biggest players in finance, government and business have debated whether bitcoin is the currency of the future. Bitcoin’s unprecedented surge in late 2020 made it especially difficult for naysayers to stick to their bearish views. Still, it’s always interesting to know who is hot, who is not on bitcoin today.

Mikhail Karkhalev pointed out that break-out from the recent sideways trading is a good signal for the continuation of the up-cycle. He believes that bitcoin's growth potential is far from being exhausted and suggests considering the following data:

Should I buy bitcoin?

Should I sell bitcoin?

Two bitcoin bears who say “No” to the cryptocurrency

It’s worth bearing in mind that these are computer-generated predictions that may bear little relation to what happens in real life.

Wallet Investor views bitcoin as an “awesome” long-term investment. It estimates BTC could hit $74,610 within 12 months and climb up to $182,513 in five years. 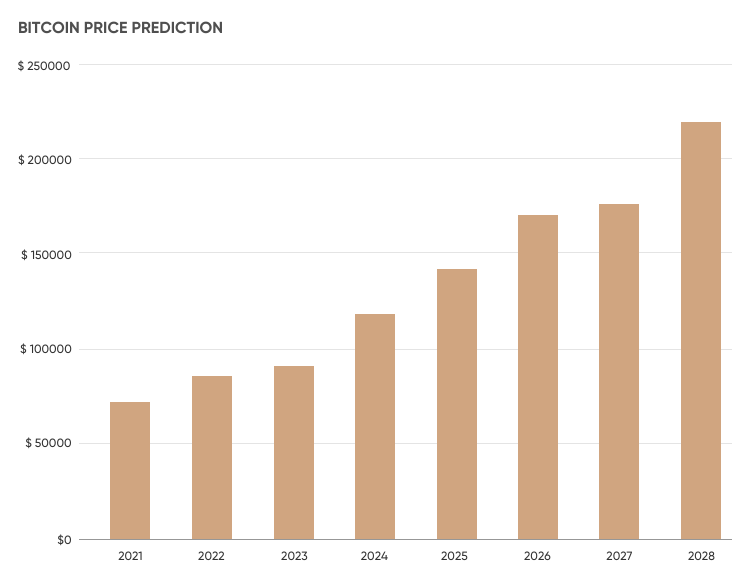 The creator of a popular bitcoin prediction model Stock-to-Flow (S2F), who uses the twitter name ‘PlanB’, believes the benchmark cryptocurrency will reach $100,000 by December 2021.

The S2F model calculates the bitcoin price by looking at its decreasing supply and growing demand. As bitcoin is halved every four years, the supply is gradually diminishing and inflation is rising. In theory, this could boost demand for bitcoin and cause a drastic surge in the BTC price.

During the second halving in July 2016, the bitcoin price was fluctuating at roughly $640. Seventeen months later bitcoin surged to a then all-time-high of just under $20,000. If the pattern repeats itself, it is possible that bitcoin could reach $100,000 by December 2021. 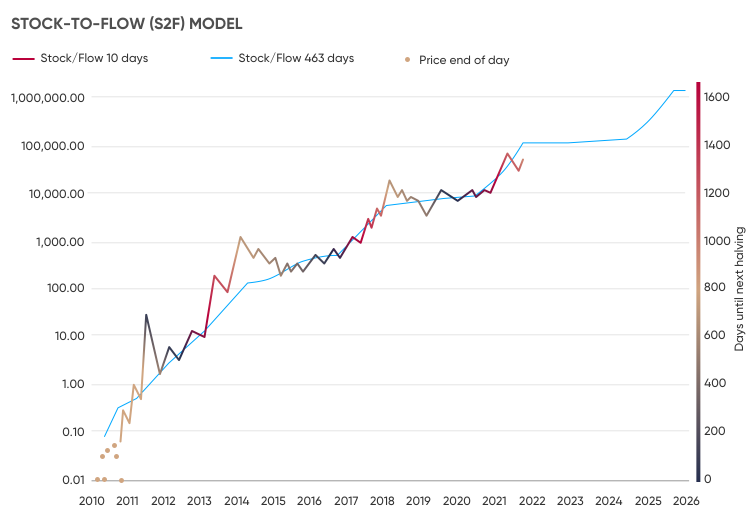 However, according to the S2F model, bitcoin’s price was supposed to hit $88,531 on 20 July 2021, which was almost three times the real price on that day. Commenting on the limitations of the S2F model to Cointelegraph, Lennix Lai from OKEx cryptocurrency exchange, said:

“Despite its limited predictions, the S2F model only had limited power over the bitcoin price prediction because it assumes the production of bitcoin will be limited. While its simplicity makes the concept easier to understand, PlanB debuted the bitcoin S2F model back in 2019. Demand back in the time is a different story to now, in which demand has a direct influence on its intrinsic value.”

The bitcoin price has undergone dramatic price swings since its inception.

Bitcoin (BTC) is the world’s first decentralised cryptocurrency. It was created by an individual or group using the pseudonym Satoshi Nakamoto, and it has since paved the way for many other alternative cryptocurrencies, known as ‘altcoins’.

Although the cryptocurrency was first launched in 2009, it was not until 17 March 2010 that bitcoin trade became possible, when the first exchange started operating on the now-defunct BitcoinMarket.com.

Bitcoin runs on a blockchain, or public ledger, that uses cryptography to secure transactions, controlling the supply of additional units and corroborating transfers. Blockchains are digital databases that store cryptocurrency transactions in blocks requiring complex mathematical calculations to record and verify.

Changes in the protocol of blockchains that create a permanent split are known as ‘forks’. So-called ‘hard forks’ result in splitting a cryptocurrency to create a new currency running on a separate blockchain. In the case of bitcoin, some of the most popular hard forks happened in August 2017, creating bitcoin cash (BCH), and in October 2017, creating bitcoin gold (BTG).

In November 2018, a hard fork of bitcoin cash gave birth to bitcoin SV. All in all, bitcoin has seen nearly 100 forks throughout its history but only a handful of those could establish themselves in the robust altcoin market. 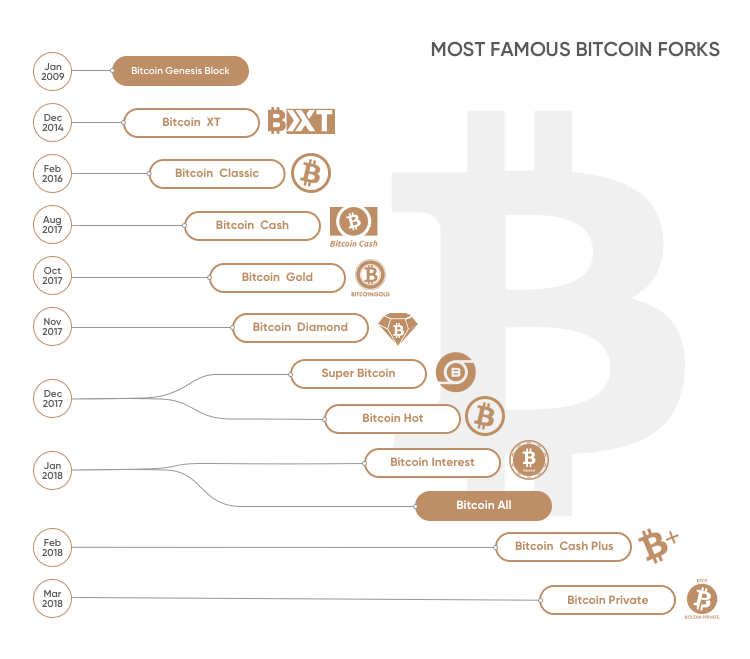 Bitcoin trading has become controversial thanks to its wild price swings and an exuberance around its rallies that has seen investors risk all of their savings and take out large loans to bet on its value rising. With each spike and retreat in value, it generates dramatic news headlines and attracts even more investors.

Bitcoin was created with a maximum supply capped at 21 million coins. As of August 2021, there were 18.7 million BTC in circulation, representing 89% of the maximum supply. That finite supply contributes to driving up the price as an increasing number of bitcoin investors look to secure a limited number of coins. In February 2021, bitcoin hit a market capitalisation of more than $1trn. 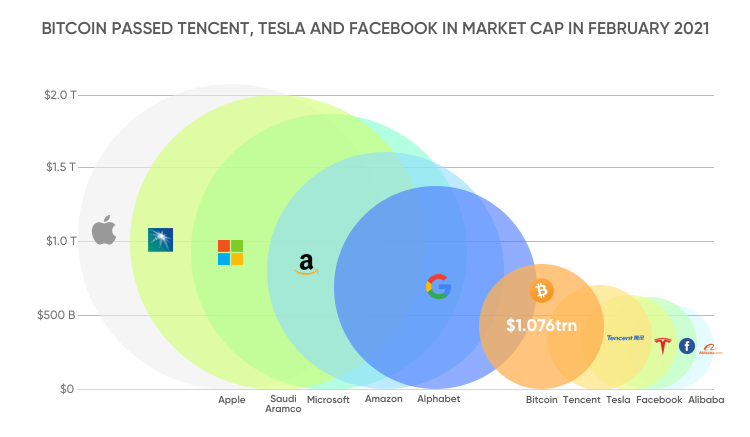 The success of bitcoin has prompted software developers to launch alternative cryptocurrencies that look to improve on bitcoin’s weaknesses, reduce transaction fees and create competition. In August 2021 there were more than 11,200 cryptocurrencies in circulation accroding to Coinmarketcap, although bitcoin remains the most popular, with the largest market value.

Is bitcoin a good investment?

There are pros and cons

As with any speculative asset, bitcoin trading carries risks. The price of bitcoin has seen several painful crashes during its history but has consistently rebounded with new gains every time. As a popular trading and investment tool, bitcoin has advantages and disadvantages.