Will Bitcoin reach $20k in 2020? Bitcoin analysis and trading strategy

Bitcoin continues to push higher in November and is trading above $16,000. This is the best level for Bitcoin since January 2018, suggesting the market is getting near its three-year highs.

There has been something really important happening with Bitcoin over the past few weeks. How high will Bitcoin go by the end of the year? Analysts agree there is a possibility of a broad rally ahead in the Bitcoin price predictions 2020.

Bitcoin has rebounded sharply since March lows, when it was trading briefly below $4,000. Now the BTC price is trading around $16,000, which is a massive recovery.

Will BTC go up further in the final months of 2020? Can Bitcoin reach $20k again?

In a short video below our chief market strategist David Jones talks about what has been driving Bitcoin so far and suggests if there is a trade for you to do.

Over the past few years Bitcoin has really struggled to hang on in the $12,000 to $14,000 area, but it does look like the picture has changed this time around. We are all wondering, will Bitcoin go up to $20k? Let’s see the next move for Bitcoin.

If we look at the RSI down here, it is definitely significantly overbought, implying that the BTC price remains vulnerable to a potential sell-off.

Traditionally, when we see an increase of width of Bollinger bands and the price pushing the upper band, we can expect something of a retracement. It did happen eventually in March, but it does not seem like this now.

However, as we have already seen before, once Bitcoin gets a move on, it can really get through a lot of barriers. So when will Bitcoin rise? Now is maybe the time to start targeting those old Bitcoin highs just shy of $20,000 from December 2017. 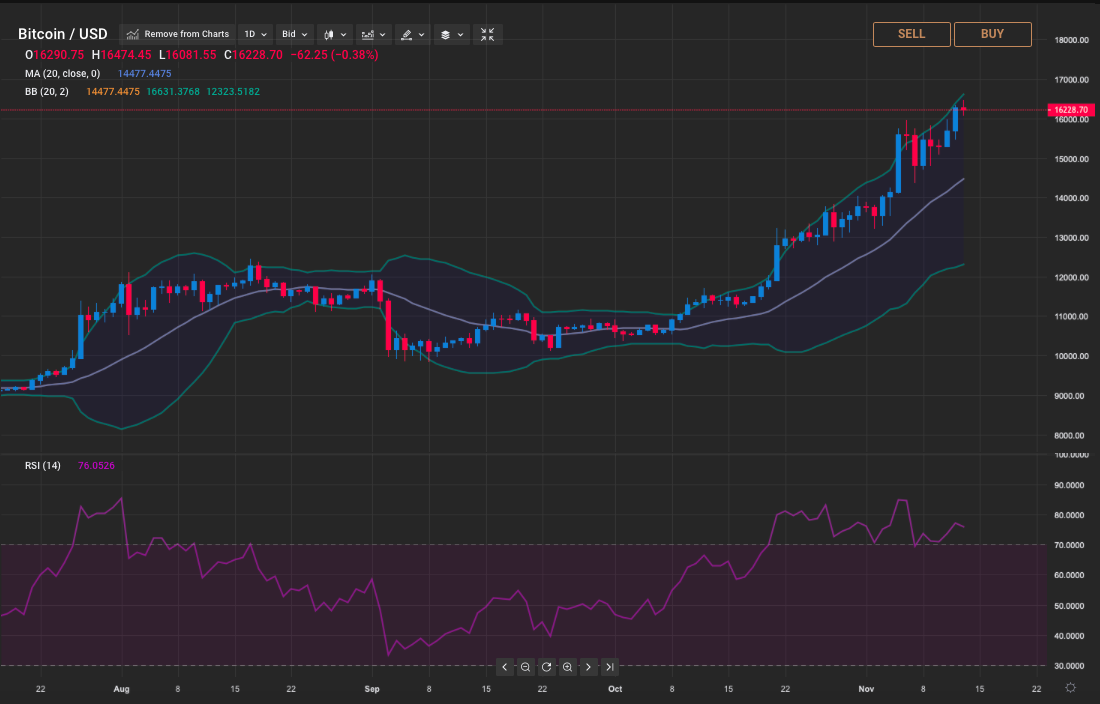 Will Bitcoin rise to $20k? Mind the price acceptance concept

In the face of extreme market volatility, driven by global factors including Pfizer/BioNTech Covid-19 vaccine testing, Bitcoin feels comfortable above $14,000 since the start of November, gradually climbing higher and higher. At the time of writing the price of Bitcoin fluctuates slightly above $16,200.

Looking at Bitcoin performance this year so far we can see that the BTC price against the US dollar quadrupled in value since the March lows.

Trading below $4,000 in March, it has recently pushed up towards $16,000. It means that now Bitcoin is trading at its best levels since January 2018, almost a three-year high.

It is incredible, but we can start thinking about the potential for targeting the BTC all-time high of $19,800 from December three years ago as the next target.

It has been a long time since we thought it might be even possible. Current Bitcoin strength means that it has finally broken out of the downtrend that had been driving the cryptocurrency’s price for the past two-and-a-half years. 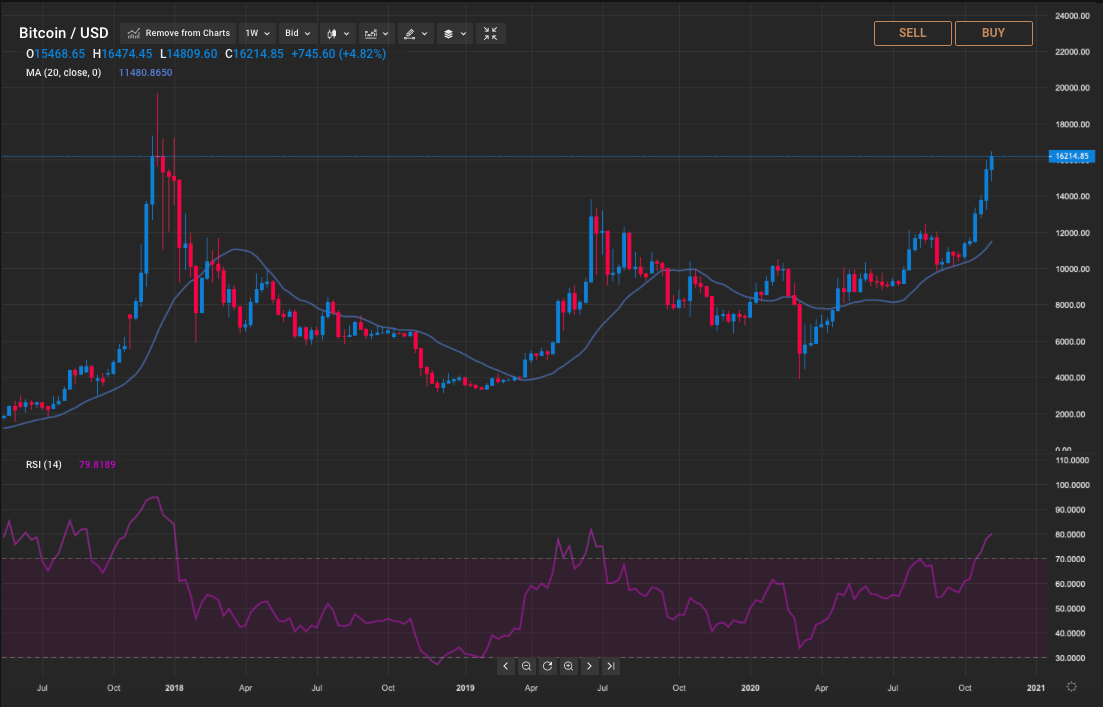 Last month, PayPal announced the facility for its users to buy, hold and sell cryptocurrencies through its platform. According to David Jones, we are seeing a wider industry acceptance for the price of cryptocurrencies.

When talking about “price acceptance”, we assume the concept we see in many markets, where a level or an area that has been rejected repeatedly in the past suddenly becomes comfortable. For Bitcoin, it was the area between $12,000 and $14,000.

In recent years, each time we have seen an emerging strength in the Bitcoin movement, it hasn’t lasted long. We have seen people either deciding to cash out, take profits or realise a loss.

The area was a real problem. And now the Bitcoin price seems stabilising at the level above $14,000. Perhaps it can serve as a base for moving higher by the end of 2020.

A continuous rally above $16,000 makes us believe that the BTC price can move even further, running back to the magical $20,000. 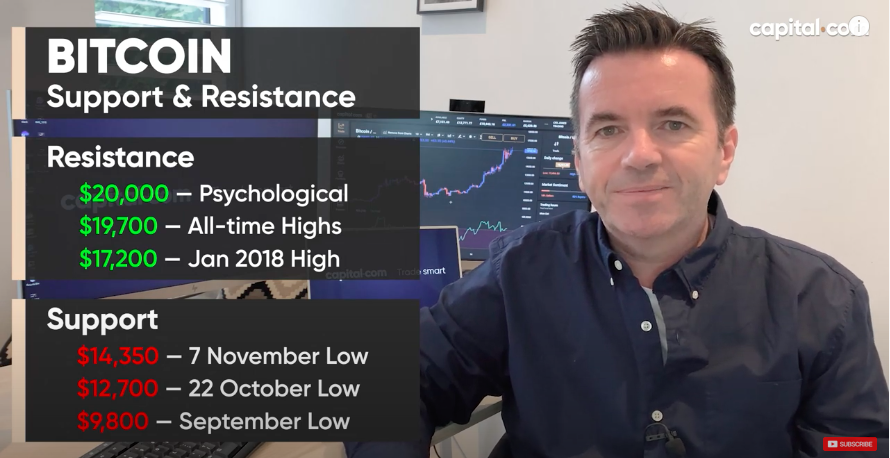 Will Bitcoin go up? Choose your trading strategy

If we look at the historical chart we will notice that the Bitcoin price has never spent a long time up from $10,000-$14,000 area. This time the situation is quite different with the idea of price acceptance and the level of $12,000-$14,000 becoming a new norm for Bitcoin.

This suggests a shift of sentiment with some traders preferring to buy the dip, if we do see a sell-off from Bitcoin’s current position back to $12,000-$13,000.

If it happens, traders should not forget about stop losses, which can be put around September lows of 9,800, which is a big level for Bitcoin. A more aggressive stop could be underneath the lows that we saw during the third week of October around $12,600.

However, if this doesn’t happen in the short term and the Bitcoin keeps mounting higher, another approach is to be a buyer if we see a strong breakout through $16,000. Again a stop-loss could be placed at around $14,000, considering the sharp moves and significant volatility of the BTC price lately.

For now, the Bitcoin price forecast for the end of the year looks bullish and capable of reaching its two-and-a-half year’s high again. Will Bitcoin ever hit $20k again? While there is no definite answer, it could definitely bring you a lot of good trading opportunities. Watch the BTC/USD price chart closely at Capital.com and spot the best levels to enter a profitable trade.