Stock broker and financial commentator Peter Schiff comes together with former politician and broadcaster Nigel Farage in an electrifying debate regarding whether 2023 would see a recession or recovery. Amidst the keen insights about the geopolitical outlook for the next year, Schiff and Farage also talk about why gold may well emerge to be one of the wisest investments for 2023. 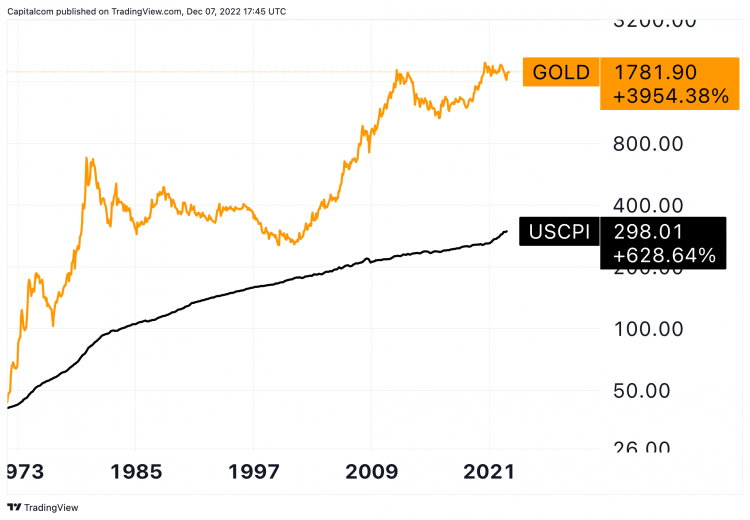 Gold vs US CPI chart over the past 50-year. Gold outperformed US inflation – Photo: Capital.com, Source: Tradingview

What is the geopolitical outlook for 2023?

According to Nigel Farage, inflation is very much here to stay for the next year as well, with him labelling it as a “disease of money caused by the government”. Thus this theme continues well into 2023 as well. He also highlights similarities between the scenarios seen in the 1980s and the 1990s and what the global economy is currently experiencing.

Although slightly lower oil and gas prices by next spring might make inflation a little easier to bear, it is unlikely to be enough. Interest rates are also expected to be sticky high, as compared to the last decade or two, albeit with fewer expected large raises.

Consumers and investors alike are likely to continue feeling the pinch of the cost of living crisis which has hit much of the world so hard. The US dollar (DXY) is also expected to remain relatively high, continuing its current upswing, although whether other major currencies take a cue from the dollar is yet to be seen.

However, Peter Schiff mentions that he is even more bearish than Nigel Farage and expects consumer prices to increase too fast for the manipulated government indexes to be able to camouflage them anymore.

Nigel Farage also believes that the expense of servicing national debt may provide a cap on interest rates rising too much, which may, in turn delay the curbing of inflation in the coming year.

The bond market may also turn out to be wildly out of control this coming year, in case the US Federal Reserve loses control of inflation completely and interest rates rise far more than expected.

Furthermore, the global economy is expected to continue to reduce its dependence on the US dollar, which may in turn lead to the US having less power in global geopolitics. This in turn, may lead to the rise of emerging markets, especially countries like China, as they fight to take center stage.

Moreover, ongoing political divides between the north and south of Europe, as well as an emergence of more radical politics is likely to exacerbate the current issues already faced by the continent, such as high inflation and the ongoing energy crisis.

Why will gold be the best investment in 2023 according to Schiff and Farage?

Farage also highlights that the more bearish the market becomes, the better gold is likely to do, especially as investors realise that it may yet be a while before inflation can be tamed with central bank monetary tightening measures.

This has been exacerbated by the fact that interest rates, although rising, are still below inflation rates, thus adding to market volatility. How gold performs also depends quite a bit on the currency that gold is purchased in, as gold bought in US dollar terms is expected to do far better than gold bought in sterling pound.

Gold-backed crypto is also expected to have quite a lot of demand in the coming year, as it reduces the price of gold even further by dividing it up into smaller, more easily purchasable shares.

According to Schiff, the price of gold denominated in US dollar has not seen a higher rise, since investors still have faith in the US Federal Reserve regarding subduing inflation to acceptable levels. As he puts it, “investors are not worried about inflation. They’re worried about the inflation fight.”.

However, if interest rates go much higher in 2023, it may put a cap on gold prices. A more alarming scenario, however, could be that the US Fed fails to raise interest rates enough to tame inflation, thus causing it to spiral into hyperinflation down the line. Fuelled by this fear, investors are likely to turn even more towards gold in the next year.

The main concern on investors’ minds for the coming year is how high the US Federal Reserve can possibly hike interest rates in order to bring inflation under control. Currently, the market is expecting a few more aggressive rate hikes in the beginning of the year, however these are expected to slow down somewhat towards the latter half of 2023.

Whether central banks allow interest rates to rise above the rate of inflation, as well as curb government spending, is also important to be seen this year. According to Peter Schiff, these may be the only really effective ways to seriously curb inflation in the long term.

Another key point is how the Russia-Ukraine conflict progresses in the coming year, especially with the added angle of the EU banning crude oil and refined oil products from Russia in the coming months. This is likely to lead to a much worse energy crisis, especially across Europe. Whether Russia retaliates further against the EU with its own sanctions and measures also remains to be seen.