Who owns the most FTT crypto? FTX token under pressure amid Binance takeover, SBF demise

Since its launch in 2019, the now failed FTX (FTT) platform has become one of the biggest crypto exchanges globally. However, its fortunes considerably reversed in November 2022 as FTX was accused of using customer funds and suffered a liquidity crunch, leading to its native FTT token crash and the firm’s bankruptcy.

What is the latest intel on the situation and who owns the most FTX tokens following the news?

FTX is a cryptocurrency exchange founded by Sam Bankman-Fried and Gary Wang in 2019 “by traders, for traders”.  It allows users trading hundreds of different cryptocurrencies as well as futures, tokenised stocks, leveraged tokens, volatility tokens and fiat tokens.

According to its website, FTX can be used by both “professional trading firms and… first-time users”. The platform was backed by Almeda Research, one of the biggest liquidity providers in the secondary market.

Since its launch, FTX has prided itself on its liquidity noting that it is “more liquid than every other futures exchange in crypto; only the BitMEX BTC perpetual futures are more liquid than FTX.  This is really hard to replicate. No new exchanges will be able to, and those around for five years have only succeeded in doing it for a single contract.”

FTX has its own native cryptocurrency, FTT. The platform describes the token as its “backbone” – it allows users to trade at lower fees and access a number of benefits on the exchange. FTT can also be used to trade derivatives. It is an ERC-20 token built on the Ethereum (ETH) ecosystem.

On 11 November 2022, the crypto exchange made headlines as it filed for Chapter 11 bankruptcy. The company’s CEO, Bankman-Fried, stepped down from his position. He was replaced by  John J. Ray III.

The bankruptcy filing followed as Binance, another major crypto exchange, chose to back out from its plan to buy the company amid allegations that FTX had mishandled a number of customer funds.

On 2 November, CoinDesk reported that Almeda’s balance sheet, which is also run by Bankman-Fried, contained FTT assets, citing private financial documents. This forced FTX to stop customer withdrawals on 8 November. A later article by the Wall Street Journal, citing people familiar with the matter, claimed FTX used billions of dollars worth of customer funds on risky bets and to help bolster Alameda.

A surge in customer withdrawals amid the news has forced the company into a liquidity crisis. To make matters worse, on 12 November FTX admins announced on Telegram that the platform has been hacked. As of 14 November, the company is not processing any withdrawals and deposits and has halted the onboarding of all new clients until further notice.

What is your sentiment on FTT/USD?

Give FTT/USD a try

According to data provided by CoinMarketCap, FTT has a maximum supply of over 352 million coins The asset’s total supply amounts to 328 million coins, while its circulating supply stood at 133 million coins, as of 14 November.

In order for the platform to keep its deflationary nature, FTX had implemented a burn mechanism whereby it destroys a number of FTT coins thus significantly reducing the token’s overall supply and hiking its price. The platform explained:

“By incentivizing FTT holders with trading fee discounts, weekly SRM airdrops, and staking rewards, the Buy and Burn mechanism is part of an overall deflationary strategy that ensures that FTT is an increasingly valuable asset and also one that is actively used within the FTX ecosystem.”

The platform decided to burn 33% of all trading fee revenue it makes. The number of FTT tokens burned will increase until half of the 350 million original FTT supply will be burned.

The token is repurchased by the platform and burned every Monday at 10 PM UTC. The process takes place on FTX’s FTT/USD market and is completed within two hours. Live updates of the process and the current circulating supply are posted on this website.

Before the recent scandal, FTX has been popular amid celebrities, endorsed by both American Football star Tom Brady and comedian Larry David.

FTT price saw its first hike on 12 May 2021 surging past $60 as the company applied for a licence in Gibraltar for a subsidiary. The token reached its all-time high of $77.69 on 9 September 2021, up by 29.5% from its surge in May, as the platform acquired LedgerX the week before. 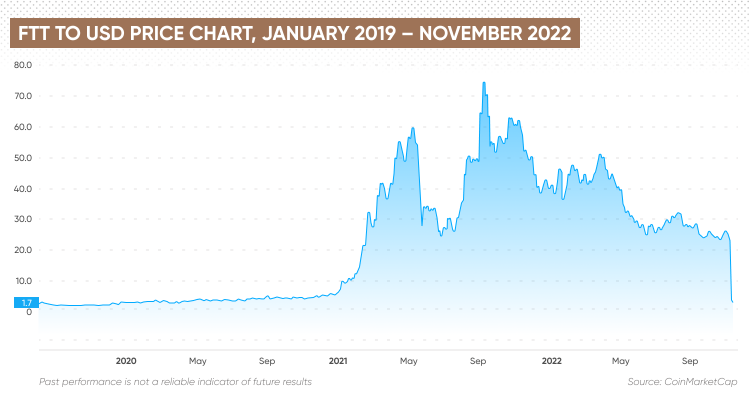 Recent bearish investor sentiment, as well as the scandals surrounding the FTX platform, hurt the cryptocurrency, pushing it an additional 95.5% lower from its January 2022 value, down to $1.49, as of 14 November.

Who owns the most FTX tokens?

Following the claims about Almeda owning a significant amount of FTT coins, let’s look at who has the most FTX tokens.

According to the website, the biggest FTX holder was an anonymous wallet that owned over 195 million FTX coins (worth around $290.5m, as of the 14 November FTX/USD rate), amounting to 59.6% of the total token supply.

Another anonymous wallet was listed as the second largest FTX holder, owning over 45 million tokens (around 13.9% of the total token supply).

The cryptocurrency exchange Binance was also listed as one of the top holders of FTX, holding over 43 million tokens, which amounted to around 13.2% of the total circulating supply through a number of various wallets, becoming the third biggest FTX holder.

Other exchanges were also on the list of top 10 FTX holders including:

In line with recent speculations, Almeda Research had made its way into the top FTX holders list owning over 297,000 FTX tokens, which is a little over 0.09% of the total supply.

The recent news forced a number of investment firms that have previously put their assets into FTX to issue statements. Paradigm, a crypto-focused investment firm, for example, told bankers that its $278m investment in FTX had lost most of its value, according to The New York Times.

Sequoia Capital, a venture capital company, said on Twitter that its $213m investment in FTX was “down to $0”.

Here is the note we sent to our LPs in GGFIII regarding FTX. pic.twitter.com/Cgp1Yxk1pz

The venture capital part of Ontario Teachers’ Pension Plan also revealed in a statement that it invested $75m in FTX in October 2021, followed up by $20m in January 2022. The firm noted that “any financial loss on this investment will have limited impact” as their exposure to FTX “represents less than 0.05%” of the pension plan’s net assets.

The co-founder and CMO of Unity Network, Michael Caspers, told Capital.com that it’s important for investors to be aware who the top FTX holders are, noting:

“Investors must be aware that, when a company itself is the biggest holder of its own token, the real value can be easily manipulated. Tokens can be dumped in case of need with investors staying behind empty handed. Crypto investors are not as protected as stock investors at this stage so when investing, stay vigilant.”

The CEO of global Digital Asset and Cryptocurrency Association, Gabriella Kusz, noted the lack of transparency when it comes to finding out who the top FTX holders are as most of the data online is either traced through a third party or was “self-declared” online through social media platform like Twitter or LinkedIn.

Even so, knowing who owns the most FTT tokens “and the degree to which [they] may be concentrated amongst any one owner is important as it may point to the overall health or degree to which there is contagion beyond solely FTX within a given firm”.

“For example, if a firm holds a significant amount of FTT and this token is now worthless what does that mean for the financial health of that firm and for its short- and long-term viability?”

Note that analysts' views can be wrong. The information about the biggest cryptocurrency whales and ownership concentration shouldn’t be used as a substitute for your own research. Always conduct your own due diligence before trading. And never invest or trade money you cannot afford to lose.

What did Bankman-Fried, FTX and Alameda do wrong?

BTC/USD 23449.30
Trade
+1.710%
XRP/USD 0.41389
Trade
+1.040%
ETH/USD 1613.02
Trade
+2.640%
LUNC/USD 0.00017796
Trade
+0.630%
DOGE/USD 0.0904652
Trade
+2.410%
The difference between trading assets and CFDs
The main difference between CFD trading and trading assets, such as commodities and stocks, is that you don’t own the underlying asset when you trade on a CFD.
You can still benefit if the market moves in your favour, or make a loss if it moves against you. However, with traditional trading you enter a contract to exchange the legal ownership of the individual shares or the commodities for money, and you own this until you sell it again.
CFDs are leveraged products, which means that you only need to deposit a percentage of the full value of the CFD trade in order to open a position. But with traditional trading, you buy the assets for the full amount. In the UK, there is no stamp duty on CFD trading, but there is when you buy stocks, for example.
CFDs attract overnight costs to hold the trades (unless you use 1-1 leverage), which makes them more suited to short-term trading opportunities. Stocks and commodities are more normally bought and held for longer. You might also pay a broker commission or fees when buying and selling assets direct and you’d need somewhere to store them safely.
Capital Com is an execution-only service provider. The material provided on this website is for information purposes only and should not be understood as an investment advice. Any opinion that may be provided on this page does not constitute a recommendation by Capital Com or its agents. We do not make any representations or warranty on the accuracy or completeness of the information that is provided on this page. If you rely on the information on this page then you do so entirely on your own risk.