Ethereum-based meme coin Shiba Inu (SHIB) has outperformed rival Dogecoin (DOGE) in the last two months, buoyed by news of the September completion of Ethereum’s transition to proof-of-stake (PoS) in a process known as ‘The Merge’.

For this article, we have compiled important information you need to know about the Shiba Inu ecosystem and the SHIB token. You will also find SHIB historical price analysis and a SHIB/USD forecast for 2022 and beyond.

Shiba Inu (SHIB/USD) is an Ethereum-based meme coin. The SHIB token launched in August 2020 as an ERC-20 token.

Shiba Inu aims to grow as a community-driven cryptocurrency project that champions decentralisation. Its supporters call themselves the ‘Shib Army’.

According to Shiba Inu’s whitepaper, Ethereum’s high level of decentralisation compared to rival layer-one blockchain networks made it the obvious choice for Shiba Inu’s founder to build the project on.

“[The founder’s] top priority was to ensure that his project was free to change and evolve with zero regulations impacting it, and ETH was the way to achieve that goal,” says Shiba Inu’s whitepaper.

The SHIB token was designed with a maximum supply of 1 quadrillion tokens. According to its website, 50% of SHIB’s initial total supply was locked in decentralised exchange (DEX) Uniswap while the other half was sent to Ethereum co-founder Vitalik Buterin ‘for safekeeping’.

Along with the SHIB token, the Shiba Inu ecosystem has two other tokens called LEASH and BONE. The project also boasts a native decentralised exchange called ShibaSwap, on which holders can stake and provide liquidity for SHIB, BONE and LEASH.

The founder of Shiba Inu is only known by the name Ryoshi. Anonymity in the cryptocurrency sector is fairly common. The most famous example is that of bitcoin (BTC) founder Satoshi Nakamoto, whose real identity is not known.

“I am not important, and one day I will be gone without notice. Take the SHIBA and journey upwards frens.”

At present, Shytoshi Kusama is known to be the lead developer at Shiba Inu. On 30 May 2022, Kusama wrote a tribute to Ryoshi, noting:

“The ethos of Ryoshi to remain anonymous and have no input on the direction of Shib, makes our mythos even more mystic and impressive.” 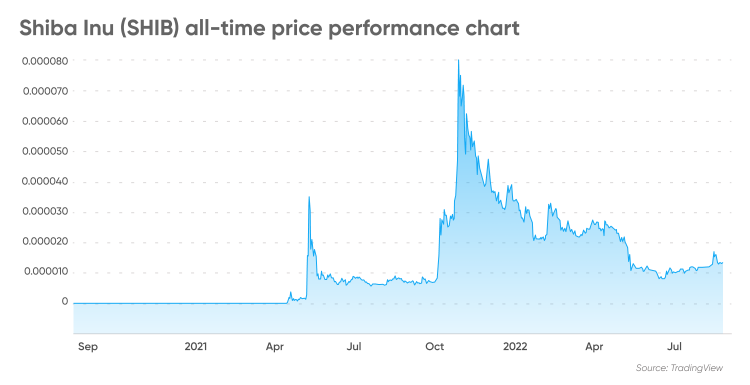 Historical price data on CoinMarketCap showed SHIB was trading at $0.0000075 in late August 2021.

By the autumn of 2021, Shiba Inu had surged to the highest level, helping the growing popularity of dog-themed meme coins following the meteoric price appreciation of DOGE.

While dogecoin saw a spectacular rally in the first half of 2021 that helped it reach a record-high of over $0.73 in May 2021, Shiba Inu, often touted as the ‘Dogecoin Killer’, saw its best months in the second half of the year.

Both memecoins were helped by the influence of Tesla founder Elon Musk, who tweeted about dogecoin and posted photos of his Shiba Inu puppy on Twitter.

In October 2021, the SHIB token surged over 800% following its listing on Coinbase a month earlier, potential listing news on popular trading app Robinhood and enthusiasm from Musk’s tweets. SHIB hit an all-time high of $0.00008845 on 28 October 2021.

With bearishness taking over the market in 2022, the Shiba Inu token price has taken a hit in line with other cryptocurrencies. As of 23 August 2022, SHIB has lost over 60% year-to-date (YTD). In comparison, rival DOGE has lost over 60%, bitcoin (BTC) is down 55% and ether (ETH) has declined 57%.

Shiba Inu is currently the 12th largest cryptocurrency, with a market capitalisation of over $7.2bn. Its circulating supply stands at over 549 trillion tokens.

Latest price drivers and news: More than The Merge

Shiba Inu has seen healthy gains in the last two months, buoyed by positive news around Ethereum’s transition to PoS in a process commonly known as ‘The Merge’, which is expected to see completion in mid-September 2022.

In other news, Shiba Inu announced on 20 July that development of its highly-anticipated SHIB.io The Metaverse Project was underway, with visualisation studio The Third Floor chosen for its design and construction.

In early July, lead Shiba Inu developer Shytoshi Kusama said progress on Shiba Inu’s layer-2 network, called Shibarium, was on track and ‘moving as fast as we can’.

Kusama announced the upcoming launch of a new Shiba Inu ecosystem token called TREAT, which will be used as a reward token for its metaverse and games. Kusama also said a stablecoin called SHI is expected to be released at some point this year.

Forecast: SHIB/USD forecast for 2022 and beyond

Wallet Investor’s long-term SHIB/USD prediction expected the token to trade at an average price of $0.0000177 by the end of 2022.

Elsewhere, DigitalCoinPrice expected the Shiba Inu token to trade at an average price of $0.0000605 in its SHIB/USD forecast for 2030.

Note that any analyst and algorithm-based Shiba Inu to USD forecast can be wrong. Forecasts shouldn’t be used as a substitute for your own research. Always conduct your own due diligence. Your decision to trade or invest should depend on your risk tolerance, expertise in the market, portfolio size and investment goals. And never invest money that you cannot afford to lose.

Crypto market wrap: Altcoin prices back in the green in big way

BTC/USD 22913.10
Trade
-0.070%
XRP/USD 0.39457
Trade
-1.370%
ETH/USD 1637.01
Trade
+0.720%
LUNC/USD 0.00018538
Trade
+1.060%
DOGE/USD 0.0914484
Trade
-0.720%
The difference between trading assets and CFDs
The main difference between CFD trading and trading assets, such as commodities and stocks, is that you don’t own the underlying asset when you trade on a CFD.
You can still benefit if the market moves in your favour, or make a loss if it moves against you. However, with traditional trading you enter a contract to exchange the legal ownership of the individual shares or the commodities for money, and you own this until you sell it again.
CFDs are leveraged products, which means that you only need to deposit a percentage of the full value of the CFD trade in order to open a position. But with traditional trading, you buy the assets for the full amount. In the UK, there is no stamp duty on CFD trading, but there is when you buy stocks, for example.
CFDs attract overnight costs to hold the trades (unless you use 1-1 leverage), which makes them more suited to short-term trading opportunities. Stocks and commodities are more normally bought and held for longer. You might also pay a broker commission or fees when buying and selling assets direct and you’d need somewhere to store them safely.
Capital Com is an execution-only service provider. The material provided on this website is for information purposes only and should not be understood as an investment advice. Any opinion that may be provided on this page does not constitute a recommendation by Capital Com or its agents. We do not make any representations or warranty on the accuracy or completeness of the information that is provided on this page. If you rely on the information on this page then you do so entirely on your own risk.