China has recently considerably ramped up its gold imports, in an effort to diversify the People’s Bank of China’s (PBOC) holdings, as well as reduce their reliance on the US dollar (DXY). This has also been seen as a move to prepare for the country’s resurging industrial and manufacturing activity, especially when it comes to jewellery manufacturing.

This sudden rise in gold purchases happened in November 2022, following a three-year break by the PBOC. In November an extra 32 tonnes of gold was bought, on top of the usual monthly purchases, which was then followed by a further 30 tonnes in December, according to the World Gold Council.

Why is China increasing its gold purchases?

At the end of 2022, China’s official gold reserves totaled approximately 2,010 tonnes, which was an increase of about 3.2% from the end of October 2022, when reserves were about 1,948 tonnes. This boost in the last quarter of the year has taken China’s gold imports for the whole of 2022 to record levels.

Since the third quarter of 2022, about 400 tonnes of gold have been bought by mostly unnamed buyers, with only about a quarter of the transactions publicly and transparently being reported. This has gone a long way in helping boost gold prices in the last few months.

This had led to several speculations of a number of central banks being behind these purchases, with China and Russia being the potential forerunners. China’s role is now being confirmed following the release of specific amounts of gold it has purchased.

This may largely be due to China preparing itself to reduce its dependence on the US dollar, as its relations with the US deteriorate further, following a number of restrictions on Chinese semiconductor companies.

This has added to the urgency of diversifying the PBOC’s reserves as fast as possible, with bullion being a good option, due to its relative ease of being converted into currency, both through traditional and underground means.

Although this increased buying by the central bank is not likely to help gold prices too much, it has definitely provided some welcome support, especially as gold has struggled with increasingly aggressive interest rate hikes by the US Federal Reserve recently.

This has also added to the support the precious metal has received through a weakening US dollar. China could also be stockpiling gold due to the possibility of further international restrictions down the road, due to its allegedly uncontrolled rise in COVID-19 cases.

If the country does see more restrictions, it could result in a significant loss of revenue from tourism as well as other industrial and manufacturing activity, in which case gold reserves may come in handy to keep the economy relatively stable.

At the time of writing, gold was trading at about $1,877 per troy ounce, having increased about 0.3% on Tuesday. The precious metal also surged about 8.9% since the end of November 2022 as well as approximately 16% since the beginning of November 2022.

However, it was still trading around 9.4% lower from its early-March 2022 highs, at the beginning of the Russia-Ukraine conflict, which boosted gold prices due to geopolitical risk and rising safe-haven demand. 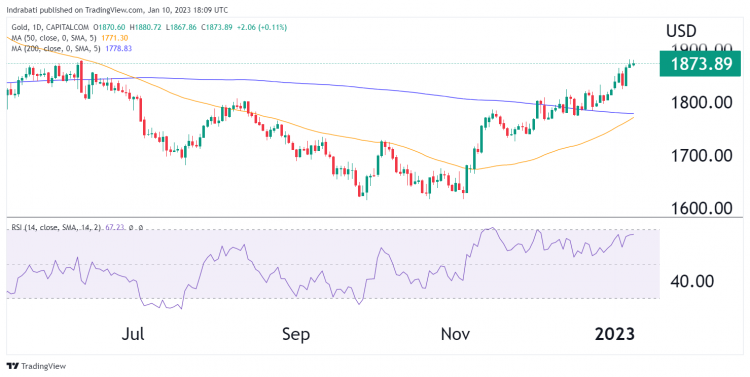 China has been buying increasing amounts of gold in the past few months – Credit: TradingView

What is the outlook for gold?

According to MKS PAMP Group gold 2023 forecast, the precious metal is likely to surge in this new year, largely driven by decreasing interest rate hikes by the US Federal Reserve, as well as increased recession and stagflation risks.

However a rebounding US dollar might put a cap on gains somewhat. Inflation is also expected to slow down somewhat, but is still likely to remain above target this year, which may reduce safe-haven demand for gold a little.

According to this Heraeus Precious Metals report, gold prices in 2023 also depend on whether other currencies, such as the euro strengthen or not, as if they do, gold may see fewer gains. Furthermore, the progress of the Russia-Ukraine war also has to be closely monitored, as if this deteriorates in the coming few months, global uncertainty and the energy crisis is likely to worsen. This may cause investors to once again seek refuge in gold and other precious metals, leading to a boost in prices.

Can gold and copper miners rally? Five stocks to watch in 2023

The China reopening trade: Is there further upside for iron ore after a 50% rally?

Could silver test the $26 level as China resists bringing lockdowns back?

Natural Gas 2.757
Trade
+2.230%
Oil - Crude 79.22
Trade
+1.640%
Gold 1927.85
Trade
+0.240%
Oil - Brent 85.50
Trade
+1.230%
Silver 23.667
Trade
+0.210%
The difference between trading assets and CFDs
The main difference between CFD trading and trading assets, such as commodities and stocks, is that you don’t own the underlying asset when you trade on a CFD.
You can still benefit if the market moves in your favour, or make a loss if it moves against you. However, with traditional trading you enter a contract to exchange the legal ownership of the individual shares or the commodities for money, and you own this until you sell it again.
CFDs are leveraged products, which means that you only need to deposit a percentage of the full value of the CFD trade in order to open a position. But with traditional trading, you buy the assets for the full amount. In the UK, there is no stamp duty on CFD trading, but there is when you buy stocks, for example.
CFDs attract overnight costs to hold the trades (unless you use 1-1 leverage), which makes them more suited to short-term trading opportunities. Stocks and commodities are more normally bought and held for longer. You might also pay a broker commission or fees when buying and selling assets direct and you’d need somewhere to store them safely.
Capital Com is an execution-only service provider. The material provided on this website is for information purposes only and should not be understood as an investment advice. Any opinion that may be provided on this page does not constitute a recommendation by Capital Com or its agents. We do not make any representations or warranty on the accuracy or completeness of the information that is provided on this page. If you rely on the information on this page then you do so entirely on your own risk.