It has been one of the high points in a low period for cryptocurrency, but what is zeon? Let’s see what we can explain, and take a look at some of the zeon price predictions that were out there on 15 August 2022.

The ZEON Network set itself up as a one-stop shop for a range of cryptocurrency products, including a crypto wallet, a way to earn interest and digital loans. The idea is that, by creating an easy-to-use platform, more people will be able to access crypto and then use it in their daily lives. As the system’s whitepaper says: “We are developing the world’s first unique tool for safe and highly liquid trading on cryptocurrency exchanges.

“The ZEON Trading platform is a decentralised and automated trading application for cross-chain trading.

“The ZEON platform places its own balances of zeon tokens on cryptocurrency exchanges so that our users can receive an immediate ‘swap’ simultaneously on several exchanges.

“The ZEON Fond, which has a sufficient number of zeon tokens on its balance, distributes and maintains the balance among the cryptocurrency exchanges based on the daily turnover of a specific exchange.

“Users no longer have to risk their own funds by placing them directly on the exchange. Zeon trading users have a huge advantage by using zeon in trading.”

Every blockchain-based platform needs to have its own native token, and the ZEON Network has the eponymously named zeon token. This crypto is used to pay people who operate the computers, or nodes, that help run the network.

It is also used to power the transactions on the platform, as well as being available to be bought, sold, or traded on crypto exchanges. People who send money using the ZEON Network are also eligible for rewards paid out in the zeon crypto.

The ZEON Network was first set up in 2018. Its creators have, perhaps in keeping with the idea of decentralisation that is crucial to both cryptocurrency and blockchain technology as a whole, remained anonymous. That said, one former employee, Kirill Levin, who worked in both the technology and marketing teams and wrote the whitepaper, has named himself. Levin, who now works for Binance, left the network in 2019.

The zeon cryptocurrency has been available on the open market since 2019 but, before that, there was an initial coin offering (ICO), which raised more than $11m by selling more than 22 billion tokens. It is worth noting here that zeon is based on the Ethereum blockchain, which means that it is a token, rather than a coin. While you might see references to such things as a zeon coin price prediction, those descriptions are, technically speaking, wrong. 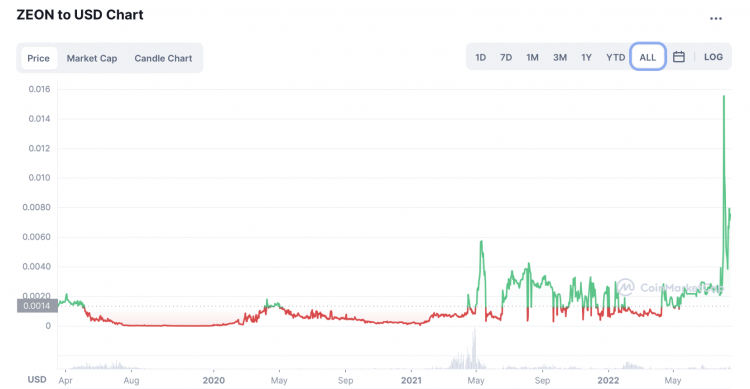 Now let’s cast our eyes over the zeon price history. While past performance should never be taken as an indicator of future results, knowing how the token has operated in the past can help us if we want to either interpret a zeon price prediction or else make one of our own.

Things did not really start to pick up again until early 2021. It was at this time, boosted in part by United States’ Covid-19 stimulus cheques making their way into the crypto sphere, that the market shot up and the rising tide raised zeon’s ship, with it reaching a periodic high of $0.006303 on 9 May.

After that, though, things fell down as the Great Crypto Day Crash of 19 May saw the market shrink and so did zeon’s price with the token operating at less than $0.001 for most of June. The end of that month saw a recovery and the token traded in a price band between $0.001 and $0.004 for much of the next couple of months, before a decline in September and October.

In late October and early November, a growing market, boosted by the news that bitcoin (BTC) had reached an all-time high, helped zeon break past $0.003, but things fell down again and it closed the year at $0.0006576.

Although most cryptocurrencies appear to have lost out significantly so far in 2022, zeon has been something of an exception to the rule. The token has enjoyed some consistent price growth, with things largely moving upwards since the start of April.

While the news of the depegging of the ust stablecoin and the collapse of the luna cryptocurrency did cause it to drop to a low of $0.0006413 on 12 May, there was recovery. It closed the month at $0.00219 and there was only a slight drop in June, despite the news that the Celsius Network’s crypto lending platform had cancelled withdrawals confirming the overall crypto bear market. Zeon finished the month at $0.002143.

It was in early August, though, that the token experienced a real boost, with the announcement that people would be able to transfer their assets between Ethereum and Binance Smart Chain causing the price to shoot up. It broke through the cent barrier to stand at an all-time high of $0.01999 on 3 August.

After that, there has been dropping back and, on 15 August, zeon was trading at around $0.007. At that time, there were about 30.53 zeon in circulation out of a total supply of 50 billion, according to CoinMarketCap. This gave the token a market cap of around $215m making it the 228th largest crypto by that metric.

It is also worth noting that zeon has risen by nearly 1,000% over the course of 2022, which is a strong performance, especially if compared to the overall crypto market’s value that has dropped by around 45% over the same time period.

With that all over and done with, let’s take a look at some of the zeon price predictions that were being made as of 15 August 2022. It is important to remember that price forecasts, especially when it comes to something as potentially volatile as cryptocurrency, are very often wrong. Also, most long-term crypto price predictions are made using an algorithm, which can change at a moment’s notice.

Finally, WalletInvestor was also a source of cautious optimism in terms of its zeon price prediction. The site suggested the token could be worth $0.00791 in August 2023 before going up to $0.0117 in five years’ time.

When considering a zeon token price prediction, it’s important to keep in mind that cryptocurrency markets remain extremely volatile, making it difficult to accurately predict what a coin or token’s price will be in a few hours, and even harder to give long-term estimates. As such, analysts and algorithm-based forecasters can and do get their predictions wrong.