Tesla Q4 2022 Earnings Preview: Is Too Much Negative News Baked in the Price?

Tesla (TSLA) will deliver its Q4 2022 results on January 25th, after the Wall Street close. The estimates are for an EPS of $1.13 with a revenue of $24.16bln. A reminder that earlier in the month, Tesla had announced their Q4 deliveries, which were up 31.5% y/y and 18.5% q/q at 405k, however, missed expectations of 420k. Consequently, this marked the second consecutive quarter that Tesla deliveries underwhelmed estimates highlighting that demand for cars has been slowing given the backdrop of supply chain issues and economic uncertainty.

In another sign that demand for cars has softened, the EV company has announced a number of price cuts globally on its vehicles by as much as 20% in a bid to boost market share. Now while traders didn’t react to positively to the recent announcements made by the company, I suspect heading into its financial results sentiment is perhaps a little too bearish. To me, this would suggest that a lot of the negative news has already been reflected in the price and thus bar to surprise on the upside is low.

As can be seen in the chart, Tesla shares have bounced from deeply oversold levels. In fact, the RSI had fallen to a record low of 16 in December and thus the recovery appears to be more corrective at this stage. What is somewhat encouraging for dip buyers is the break above resistance at 123.00-124.50, which will need to hold in order to suggest that there is a window for a more persistent recovery in Tesla. Should we see a hold of prior resistance, now support, there is room for a move towards 150. 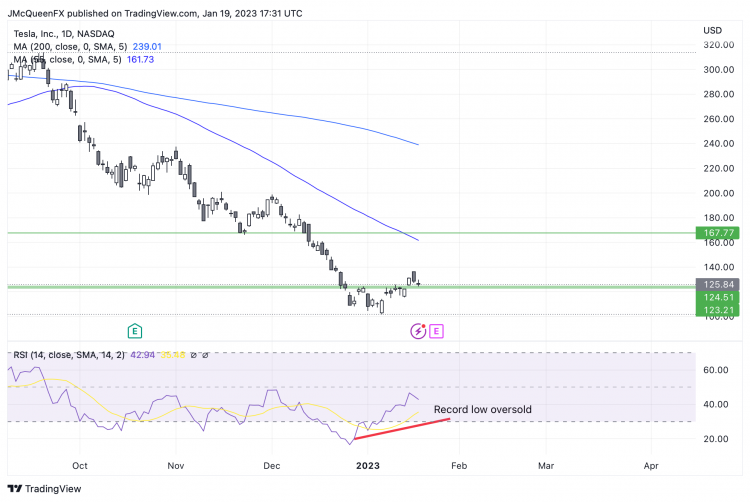 Natural Gas 2.777
Trade
+2.900%
US100 12047.6
Trade
+0.970%
BTC/USD 23106.95
Trade
+1.540%
XRP/USD 0.40463
Trade
+2.360%
Oil - Crude 79.28
Trade
+1.730%
The difference between trading assets and CFDs
The main difference between CFD trading and trading assets, such as commodities and stocks, is that you don’t own the underlying asset when you trade on a CFD.
You can still benefit if the market moves in your favour, or make a loss if it moves against you. However, with traditional trading you enter a contract to exchange the legal ownership of the individual shares or the commodities for money, and you own this until you sell it again.
CFDs are leveraged products, which means that you only need to deposit a percentage of the full value of the CFD trade in order to open a position. But with traditional trading, you buy the assets for the full amount. In the UK, there is no stamp duty on CFD trading, but there is when you buy stocks, for example.
CFDs attract overnight costs to hold the trades (unless you use 1-1 leverage), which makes them more suited to short-term trading opportunities. Stocks and commodities are more normally bought and held for longer. You might also pay a broker commission or fees when buying and selling assets direct and you’d need somewhere to store them safely.
Capital Com is an execution-only service provider. The material provided on this website is for information purposes only and should not be understood as an investment advice. Any opinion that may be provided on this page does not constitute a recommendation by Capital Com or its agents. We do not make any representations or warranty on the accuracy or completeness of the information that is provided on this page. If you rely on the information on this page then you do so entirely on your own risk.