Shiba Inu (SHIB) has also witnessed aggressive selling and the bears are trying to sustain the price below $0.000008 as of 29 December 2022.

The shiba inu community, popularly known as shib army, has been keenly awaiting the launch of the Layer-2 solution Shibarium for some time but the developers of the project have not announced a release date yet. Shytoshi Kusama, the pseudonymous lead developer of shiba inu, tweeted on 24 December that the launch will happen “very soon”, but not during the holiday season. He added that the next year was “an important one for humanity.”

Happy Holidays to more than half the ????. Wen Shibarium? Please know it will come very soon*, but not during a crucial time for people to spend with their family (or the resulting New Years party time). Enjoy these next days, next year is an important one for humanity.

While engaging with the community via the shiba inu Telegram channel recently, Kusama said that members should focus on “how they will build or offer things on Shibarium.” The snapshot of the discussion was shared by the Twitter handle @LucieSHIB.

“Best thing for everyone is to think about how they will build or offer things on
Shibarium” - @ShytoshiKusama today on telegram.
… and some thoughts on market. #Shibarium #bearmarket $SHIB pic.twitter.com/Ql3VjE5ANS

In a separate development, the payment gateway NOWPayments said that users could pay for Netflix and Spotify monthly subscriptions using SHIB.

Got a lot of subscriptions? Monthly @netflix and @spotify?

⚡️ How cool would that be if you could pay for those with $SHIB by @Shibtoken?#SHIBARMY, here’s how to accept #crypto payments with #SHIB
????????????https://t.co/J5HYDeUDIU

Could shiba inu go up in anticipation of the release of Shibarium in 2023? Read the SHIB price analysis to find out. 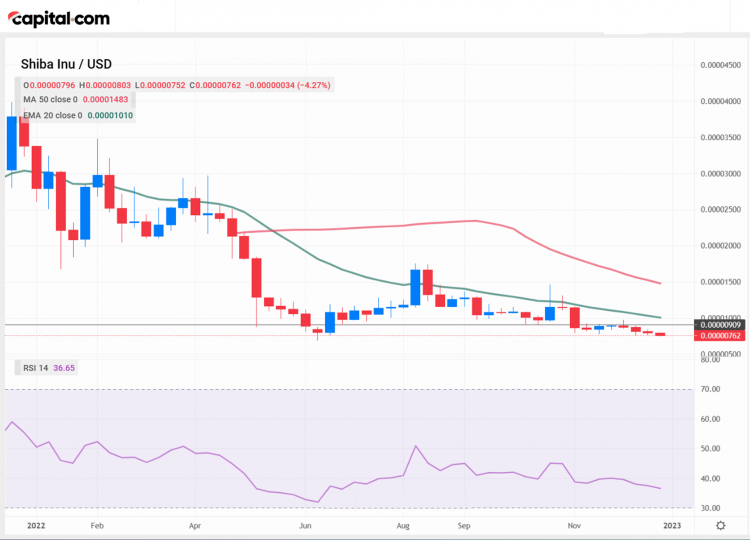 SHIB’s price has been gradually declining toward the June low near $0.000007. Both moving averages are sloping down and the relative strength index (RSI) is in negative territory, indicating that bears are in control.

If the price breaks below the June low, the SHIB/USD pair could signal the resumption of the downtrend. The pair could then drop to $0.000005 ,where buyers may again try to arrest the decline.

The first sign of strength will be a break and close above the 20-week exponential moving average (EMA). Such a move will indicate that the selling pressure could be reducing. The pair could then attempt a rally to $0.000015 and later to $0.000018. The bulls will have to clear this hurdle to signal the start of a new up-move.

What is your sentiment on SHIB/USD?

Give SHIB/USD a try 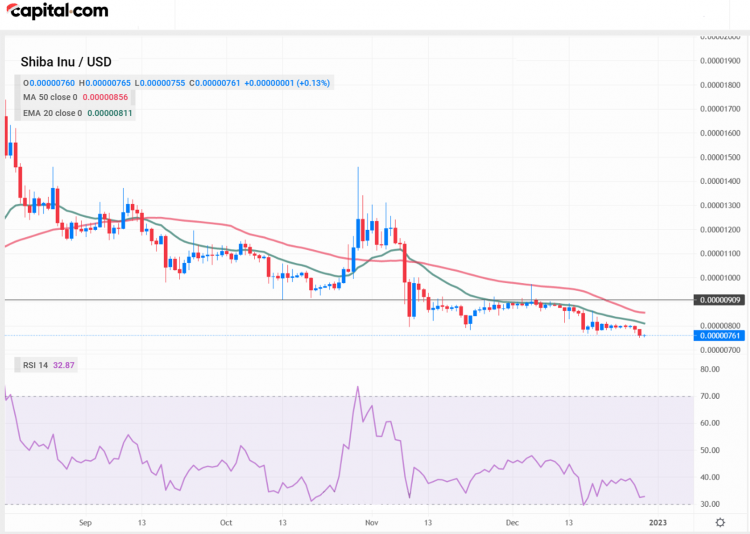 Although the downsloping moving averages indicate advantage to bears, the RSI is trying to form a bullish divergence. This suggests that the selling pressure could be reducing. However, in a strong downtrend, bullish divergences tend to get invalidated. Hence, traders may wait for the price to confirm a potential trend reversal before jumping in to buy.

Shiba Inu has turned weak in the near term after the break below $0.000008. Shiba Inu’s price analysis suggests a likely drop to $0.000007, where buyers are expected to aggressively defend the level. On the upside, buyers will have to pierce the $0.000009 resistance to gain the upper hand.

BTC/USD 23201.05
Trade
-2.610%
XRP/USD 0.40315
Trade
-2.830%
ETH/USD 1590.84
Trade
-3.370%
LUNC/USD 0.00017282
Trade
-3.510%
DOGE/USD 0.0871734
Trade
-4.010%
Capital Com is an execution-only service provider. The material provided on this website is for information purposes only and should not be understood as an investment advice. Any opinion that may be provided on this page does not constitute a recommendation by Capital Com or its agents. We do not make any representations or warranty on the accuracy or completeness of the information that is provided on this page. If you rely on the information on this page then you do so entirely on your own risk.