Bitcoin (BTC), the biggest token by market capitalisation, has been suffering losses amid the crypto winter of 2022. Meanwhile Shiba Inu’s SHIB has also struggled through a volatile rain as the meme token entered the metaverse.

What does this mean for the SHIB to BTC forecast? Let’s take a look at the shiba inu to bitcoin cryptocurrency pair and some of the factors that may shape its exchange rate.

SHIB/BTC is the exchange rate between SHIB, the native cryptocurrency for the Shiba Inu ecosystem, and BTC, the native coin on the Bitcoin Network.

Dr Hamed Taherdoost, e-business professor at University Canada West, explained that the SHIB to BTC price is based on the data surrounding the rates of each cryptocurrency corresponding to US dollars used by online calculators and exchanges:

“The rate gets updated live every few seconds as soon as the rates of the most recent exchanges alter.”

Bitcoin is one of the most popular cryptocurrencies. It was created in 2009 by an anonymous individual or group of individuals collectively known as Satoshi Nakamoto. The cryptocurrency acts as a peer-to-peer payments system and uses one collective network known as a blockchain.

This blockchain uses a Proof-of-Work (PoW) consensus mechanism, which is managed by miners that solve mathematical equations to confirm the legitimacy of each BTC transaction. For doing so, miners are rewarded BTC tokens.

One of the biggest events surrounding bitcoin are halving events, which cut the rewards given to miners in half every 210,000 blocks mined, or approximately every four years. Halving events reduce the amount of BTC coins in circulation.

Shiba Inu is an Ethereum-based token that features the popular 2013 meme of a Shiba Inu dog on its coins. The so-called ‘Dogecoin killer’ is an altcoin and rival to the popular meme coin DOGE. The project aims to outperform DOGE without surpassing the $0.01 barrier, something it has done several times.

Shiba Inu was launched in 2020 by an individual who also keeps their identity secret, using the nickname Ryoshi. While SHIB was created as a meme crypto token and launched as a joke, it has evolved into a “vibrant ecosystem”.

Ryoshi wrote on their Medium blog:

“When we design [sic] the SHIBA experiment, our goal was very altruistic to give an opportunity for fair distribution and ownership from day 1. This means even if I RYOSHI and my frens setup SHIBA, we have no more potential for ownership that anybody else in the world.”

Unlike BTC, which has the maximum supply of 21 million coins, SHIB does not have a capped limit.

Around that time, the meme token was also performing well, as seen on the SHIB chart below. The cryptocurrency caught the attention of investors when Tesla (TSLA) CEO Elon Musk appeared in an episode of Saturday Night Live (SNL) and told viewers that Dogecoin (DOGE) was a “hustle”.

Similarly, the USD to shiba inu price saw a surge of about 920%, with SHIB hitting its all-time high of $0.00007924 on 28 October 2021 amid rumours that the token could be traded on the popular US trading platform Robinhood (HOOD). 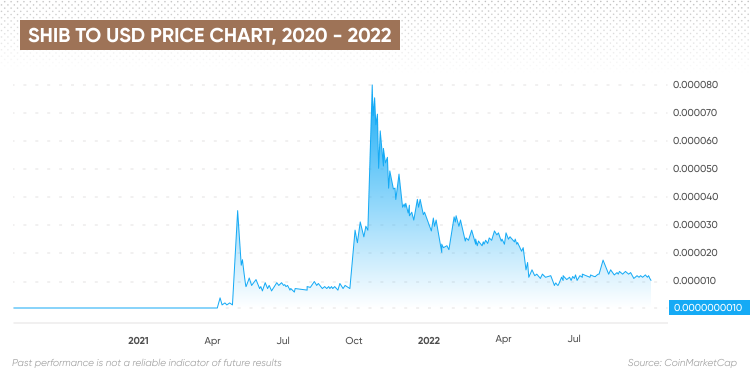 The BTC chart shows that the world’s biggest crypto had also seen some successes, with the token’s price hitting its all-time high of $64,000 on 12 November 2021. However, this did not have a big effect on the shiba inu to bitcoin price as shiba was also up.

Entering the metaverse and other SHIB/BTC news

“There is not much going on in the markets in general. Everyone is waiting on the sidelines. This is especially true for meme coins like Shiba Inu. Memes are a hot topic when it comes to a bull market, but currently we are very far from that. When the world is fighting with high inflation and a war, the memes become less and less relevant.”

However, apart from macroeconomic factors, the SHIB to BTC exchange rate has benefited from the platform’s step into the metaverse which was the reason for renewed investor enthusiasm, Dr Taherdoost noted.

On 6 October 2022, Shiba Inu released its own immersive metaverse game known as Shiba Eternity, the blockchain’s first step into the metaverse and further expansion. The game’s name was revealed by the blockchain in early August, however, the platform announced it was ready to enter the metaverse in early February 2022.

In addition to the launch of Shiba Eternity, Shiba Inu is also working on a metaverse project called SHIB: The Metavrse, where token holders will be able to carry out a number of actions including purchasing lands and win non-fungible tokens (NFTs) as well as a number of tokens including BONE, LEASH and SHIB.

In other news, the SHIB to BTC price also benefited from Shiba Inu announcing that the popular crypto exchange platform Binance had added SHIB coins to its list of supported cryptocurrencies for its Binance Card, which is issued in Europe.

We are pleased to announce that @binance has added SHIB to the list of supported tokens for the Binance Card issued in Europe.

You can now pay with SHIB at 60+ million merchants worldwide. Furthermore, get up to 8% cashback and zero annual or FX fees!https://t.co/0Xj7IXPyt0 pic.twitter.com/FqINtnHFWx

Dr Taherdoost added that the shiba inu price may have benefited from renewed interest in Ethereum, which “provides the fundamental blockchain for SHIB”.

SHIB to BTC forecast for 2022 and beyond

Based on the analysis of past shiba inu price performance, as of 14 October, the algorithm-based forecasting service Wallet Investor predicted that SHIB/USD could fall to $0.00000146 in 2023. The platform did not provide a price prediction for 2027.

While Wallet Investor did not provide a direct SHIB to BTC forecast, data suggested that the exchange rate could be 0.000000000575BTC in 2023.

According to Shilo, the SHIB to BTC price is heavily affected by “the strength or price stability of the blue-chip crypto BTC and the weakness of the market”. He said:

“As a rule of thumb, everything is losing value against BTC. Some say that any coin available for trading is just made to accumulate BTC away from retail customers, which is not very far from the truth, in my opinion.”

“This cryptocurrency is affected by the statement that everyone should be free to buy unlimited Shiba Inu coins in the open market. Thus, there would be a fair market that is not biassed and cannot be dumped. Based on the provided technical analysis of the prices of Shiba Inu and referring to price fluctuations in 2022, crypto experts expect rising trends for the upcoming year as well.”

Keep in mind that analysts’ and algorithm-based predictions can be wrong and shouldn’t be used as a substitute for your own research. Always conduct your own due diligence on the cryptocurrency before trading, looking at the latest news, a wide range of analyst commentary and technical analysis. Note that past performance does not guarantee future returns. And never trade money you cannot afford to lose.

BTC/USD 23363.65
Trade
-0.700%
XRP/USD 0.41153
Trade
-0.350%
ETH/USD 1655.10
Trade
+0.520%
DOGE/USD 0.0921435
Trade
+0.970%
LUNC/USD 0.00020036
Trade
+14.820%
The difference between trading assets and CFDs
The main difference between CFD trading and trading assets, such as commodities and stocks, is that you don’t own the underlying asset when you trade on a CFD.
You can still benefit if the market moves in your favour, or make a loss if it moves against you. However, with traditional trading you enter a contract to exchange the legal ownership of the individual shares or the commodities for money, and you own this until you sell it again.
CFDs are leveraged products, which means that you only need to deposit a percentage of the full value of the CFD trade in order to open a position. But with traditional trading, you buy the assets for the full amount. In the UK, there is no stamp duty on CFD trading, but there is when you buy stocks, for example.
CFDs attract overnight costs to hold the trades (unless you use 1-1 leverage), which makes them more suited to short-term trading opportunities. Stocks and commodities are more normally bought and held for longer. You might also pay a broker commission or fees when buying and selling assets direct and you’d need somewhere to store them safely.
Capital Com is an execution-only service provider. The material provided on this website is for information purposes only and should not be understood as an investment advice. Any opinion that may be provided on this page does not constitute a recommendation by Capital Com or its agents. We do not make any representations or warranty on the accuracy or completeness of the information that is provided on this page. If you rely on the information on this page then you do so entirely on your own risk.