Polygon price analysis: Will $1 be conquered?

Polygon (MATIC) has been an outperformer among major cryptocurrencies because it has stayed way above the June lows. This indicates that traders are holding on to their positions and not dumping them in panic. Buyers are trying to push MATIC toward the overhead resistance of $1 as of 1 December 2022.

According to Polygonscan data, the number of unique addresses on polygon has seen a steady rise over the past few months and is nearing the 200 million mark. This suggests that despite the FTX debacle, investor interest in polygon has remained strong.

One of the reasons for polygon’s performance could be its integration with major companies such as Starbucks, Meta, and Reddit. According to Messari, this has helped polygon almost triple NFT sales since the end of September.

How have NFTs fared during the downturn?@0xPolygon saw a 191% increase in NFT sales since the end of September as Web2 companies attempted to fully integrate NFTs into their platforms.@Starbucks, @Reddit, and @Meta have all integrated with @0xPolygon. pic.twitter.com/pIgXQgdgwt

Polygon received a further boost when it was chosen by Nike to launch the sports brand’s NFT marketplace, called Swoosh.

????@KuWallet has reached a strategic partnership with @0xPolygon, the leading Layer 2 platform for #Ethereum scaling and infrastructure development.

Expanding its metaverse offerings, polygon became the first blockchain to host an airport on the metaverse. India’s Bangalore Airport launched Metaport on polygon, where it plans to showcase its T2 terminal, making it easier for customers to familiarise themselves with the airport and its services.

Welcome to the future powered by #Polygon, @AWS & @Intel ???? pic.twitter.com/9ESUoIvplm

Could polygon go up on the back of the integrations? Read the MATIC price analysis to find out. 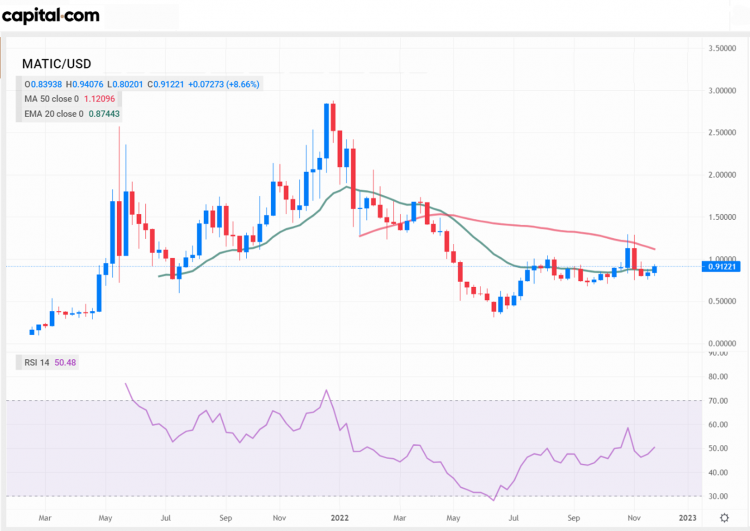 MATIC’s price has been attempting to form a higher low at $0.68. A few weeks back, the bulls tried to push the price above the 50-week simple moving average (SMA) but the bears held their ground. Hence, this becomes the key level to watch out for on the upside.

The flattish 20-week exponential moving average (EMA) and the relative strength index (RSI) near the midpoint, suggest a balance between supply and demand. Buyers will have to drive the price above $1.30 to gain the upper hand. If they do that, the MATIC/USD pair could rally to $1.73.

Contrary to this assumption, if the price turns down from the 50-week SMA, it will suggest that bears continue to sell on rallies. The bears will then make another attempt to sink the price below the strong support at $0.68.

A break and close below this level could indicate advantage to bears. The pair could then drop toward the psychological support at $0.50 and later retest the June low at $0.31. 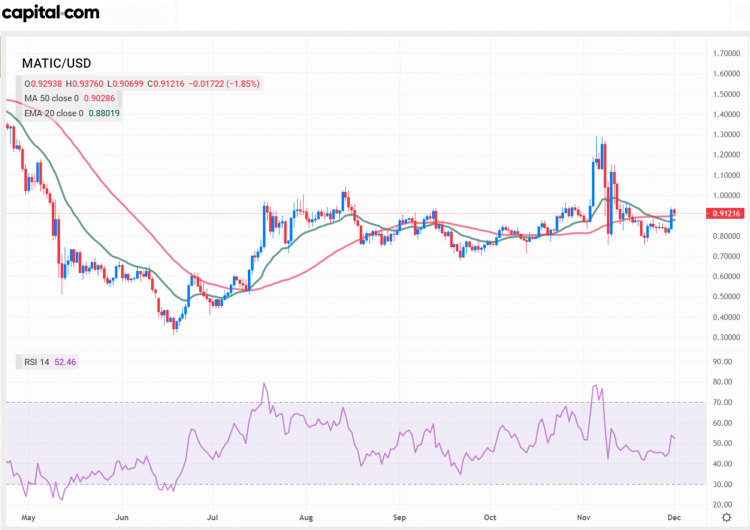 Polygon’s price surged above the moving averages on 30 November, indicating that buyers are attempting to gain the upper hand. The bulls will now try to drive the price above $1 and extend the recovery to $1.30.

However, the bears are likely to have other plans. They are trying to pull the price back below the moving averages. If they do that, it will suggest that bears continue to sell on rallies.

That could pull the price down toward $0.80 and then to $0.76. A bounce off this support could keep the pair range-bound between $0.76 and $0.97 for some time. The flattish moving averages and the RSI near the midpoint also suggest a consolidation in the near term.

Polygon: Buy or sell this week?

Polygon has risen above the moving averages and the bulls will try to extend the rally above the psychological level of $1. If that happens, polygon’s price analysis suggests a rally to $1.30 may be on the cards. Conversely, if the price drops below the 20-day EMA, the pair could decline to $0.76.

Natural Gas 2.467
Trade
-1.910%
US100 12594.6
Trade
+1.100%
BTC/USD 23556.10
Trade
-0.800%
XRP/USD 0.41169
Trade
-0.970%
Oil - Crude 76.06
Trade
-1.020%
The difference between trading assets and CFDs
The main difference between CFD trading and trading assets, such as commodities and stocks, is that you don’t own the underlying asset when you trade on a CFD.
You can still benefit if the market moves in your favour, or make a loss if it moves against you. However, with traditional trading you enter a contract to exchange the legal ownership of the individual shares or the commodities for money, and you own this until you sell it again.
CFDs are leveraged products, which means that you only need to deposit a percentage of the full value of the CFD trade in order to open a position. But with traditional trading, you buy the assets for the full amount. In the UK, there is no stamp duty on CFD trading, but there is when you buy stocks, for example.
CFDs attract overnight costs to hold the trades (unless you use 1-1 leverage), which makes them more suited to short-term trading opportunities. Stocks and commodities are more normally bought and held for longer. You might also pay a broker commission or fees when buying and selling assets direct and you’d need somewhere to store them safely.
Capital Com is an execution-only service provider. The material provided on this website is for information purposes only and should not be understood as an investment advice. Any opinion that may be provided on this page does not constitute a recommendation by Capital Com or its agents. We do not make any representations or warranty on the accuracy or completeness of the information that is provided on this page. If you rely on the information on this page then you do so entirely on your own risk.