Microsoft (MSFT) is set to report Q2 2023 earnings on January 24th. The consensus among analysts is that the tech giant will report a 2.4% rise in revenue at $52.96bln, marking the slowest pace in roughly 6 years, while profit is expected to fall as much as 9% to $2.30.

Sentiment around the tech space heading into this earning season has been downbeat and likely exacerbated by the wave of layoffs amid slowing sales growth. This also includes Microsoft who recently announced that they will cut 10,000 jobs, working out to be just under 5% of its workforce. In turn, the company will take a $1.2bln charge on its earnings. What’s more, Microsoft’s cloud computing business segment will be closely watched after last quarter saw Azure’s growth slowing to 35% from 50% a year prior. The expectation is for a continued slowing in digital spending given higher interest rates and cuts to corporate spending.

The Next Big Catalyst for Microsoft

That being said, among the main focal points will be the outlook regarding disruptive AI technology such as OpenAI, which could be the next big catalyst for the company. The tech giant is reportedly planning to invest $10bln in OpenAI, which will see Microsoft get a 75% share of profits until it makes a full return on its investment, after which the company would receive a 49% stake.

Is OpenAI a Threat to Google?

Currently, google derives around 55-60% of its quarterly revenue ($69-70bln) from search alone, which naturally has increased the scrutiny as to whether OpenAI is a material threat to Google’s core business. However, with the cost to run ChatGPT per query much more expensive than Google, the threat is not imminent. 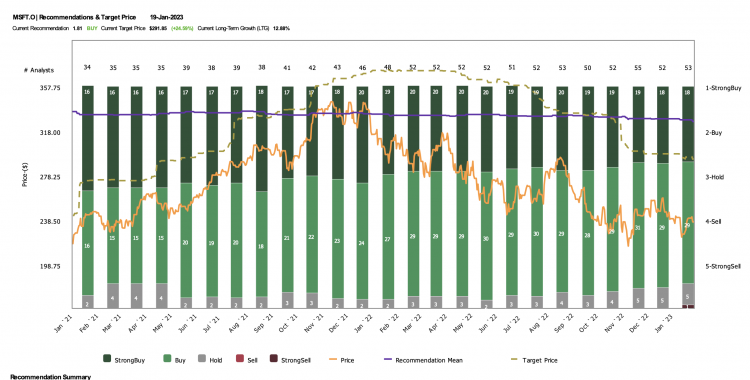 On the technical front, risks remain titled to the downside for Microsoft shares given that the 200MDA has failed to crack the 200DMA (256.64). At the same time and perhaps more importantly, Microsoft continues to hold the 200WMA. A level that has not been notably breached/closed below since 2011. The trend remains lower and thus this area will be key as a close below could somewhat accelerate weakness. 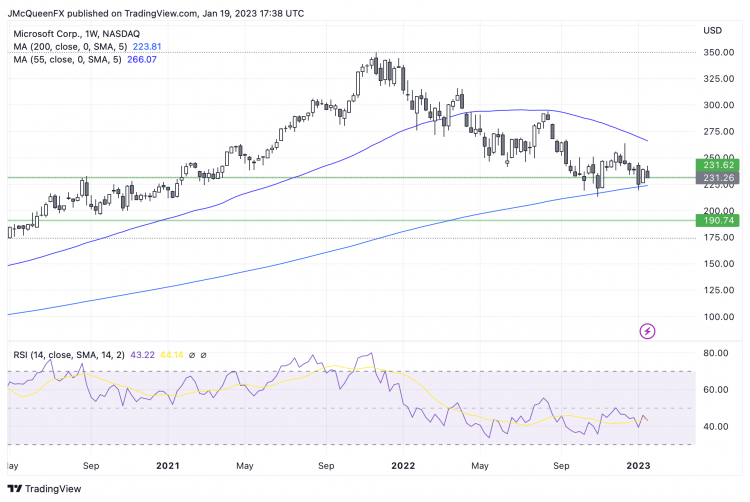 Natural Gas 2.773
Trade
+2.710%
US100 12053.9
Trade
+1.000%
BTC/USD 23123.60
Trade
+1.510%
XRP/USD 0.40423
Trade
+2.290%
Oil - Crude 79.40
Trade
+1.850%
The difference between trading assets and CFDs
The main difference between CFD trading and trading assets, such as commodities and stocks, is that you don’t own the underlying asset when you trade on a CFD.
You can still benefit if the market moves in your favour, or make a loss if it moves against you. However, with traditional trading you enter a contract to exchange the legal ownership of the individual shares or the commodities for money, and you own this until you sell it again.
CFDs are leveraged products, which means that you only need to deposit a percentage of the full value of the CFD trade in order to open a position. But with traditional trading, you buy the assets for the full amount. In the UK, there is no stamp duty on CFD trading, but there is when you buy stocks, for example.
CFDs attract overnight costs to hold the trades (unless you use 1-1 leverage), which makes them more suited to short-term trading opportunities. Stocks and commodities are more normally bought and held for longer. You might also pay a broker commission or fees when buying and selling assets direct and you’d need somewhere to store them safely.
Capital Com is an execution-only service provider. The material provided on this website is for information purposes only and should not be understood as an investment advice. Any opinion that may be provided on this page does not constitute a recommendation by Capital Com or its agents. We do not make any representations or warranty on the accuracy or completeness of the information that is provided on this page. If you rely on the information on this page then you do so entirely on your own risk.