By Peter Henn and Iliana Mavrou

It aims to give people a chance to take part in a crypto lottery, but what is lucky block (LBLOCK)?

Let’s take a look and see what we can find out, and examine some of the lucky block price predictions that were being made on 29 September 2022, too.

Lucky Block refers to itself as the “no.1 crypto games platform where everyone’s a winner”. It’s an online lottery based on the BNB Chain (BNB).

Having analysed a series of problems faced by lottery systems, including a number of financial and operational risks, vulnerability to hacking, lack of security, trust, and transparency and liquidity to pay players, the platform aims to create a system that would focus on:

By using distributed ledger technologies (DTL), the platform allows for fast and even instant prize pay-outs, which makes it different from traditional lottery platforms where transactions are “a notoriously slow process”.

In addition to that, Lucky Block also:

The platform’s native cryptocurrency is the LBLOCK token, which is used as a payment method in the Lucky Block ecosystem. Each person who owns an LBLOCK token becomes an owner of the lottery. They can use some of their tokens to enter the lottery for a chance to win the Daily Jackpot.

If a person chooses not to enter the lottery, their tokens stay in their wallet and they get the chance to receive the Daily Jackpot dividend payment that all lucky block token holders receive.

Jackpot winners are chosen by the platform’s internal random number generator (RNG). One person will have the chance to win 70% of the jackpot. Of the rest, 10% will be donated to a charity, 10% will go towards marketing the Lucky Block platform, and 10% will be distributed between all LBLOCK token holders in line with their investment size.

The platform’s cryptocurrency launched through a pre-sale event in the fourth quarter of 2021. Early adapters were allowed to purchase 32.5 billlion tokens, which were sold in 49 days.

The Binance-based version LBLOCK has a maximum supply of 100 billion tokens and, as of 2 September 2022, a self-reported 40.77 billion are in circulation, according to data published by CoinMarketCap. If that figure were true, it would have a market cap of around $15m.

However, there is another, newer, version of LBLOCK. This version, which was created to take advantage of the abilities of the Ethereum (ETH) blockchain, was announced in the summer of 2022 and came onto the open market shortly afterwards.

While the initial version of lucky block was based on the BNB Chain, the new version, which launched on 25 July 2022, is based on Ethereum. Either way, this means that lucky block is a token, rather than a coin. While you might see references to such things as a lucky block coin price prediction, these references are, technically speaking, wrong.

Let's now cast our eyes on the LBLOCK price histories. While past performance should never be taken as an indicator of future results, knowing what the token has done in the past can help give us some much needed context when it comes to either making or interpreting a lucky block price prediction.

The positive lucky block crypto news came as the platform was featured by a number of media outlets, was listed on the CoinSniper and Binance crypto exchanges, and acquired more than $6m for the lottery pool. 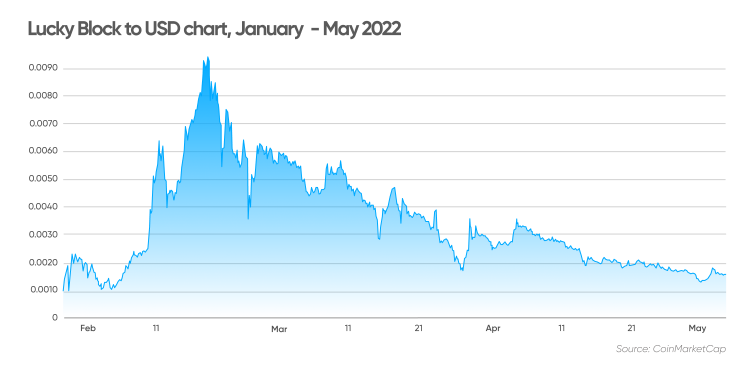 Downwards price action did not last long. The cryptocurrency managed to regain some momentum in the following days, rising to around $0.006 as the platform announced the launch of its collection of non-fungible tokens (NFTs).

A sharp surge to over 107% followed over the next 24 hours as the token reached $0.003542 when the platform launched its NFT collection.

Make sure you follow our social media and don't miss your chance for a #lambo by buying our #NFT (coming soon)! ????️https://t.co/BaFMLsga6t#BSCGem #crypto #blockchain #altcoin #NFT pic.twitter.com/A2Gmry5Asr

Following more bearish price action, on  4 April, the token hit $0.003533 – its highest April value. After that, though, things went downhill, with the problems exacerbated by the market crash triggered by the depegging of the UST stablecoin and the collapse of the associated LUNA cryptocurrency, dropping to $0.001056 on 12 May.

Let’s now take a look at some of the lucky block price predictions that were being made on 29 September 2022. It is important to remember that price forecasts, especially when it comes to something as potentially volatile as cryptocurrency, are very often wrong. Also, it is worth noting that long-term crypto price forecasts are often made using an algorithm, which can change at any time.

Finally, WalletInvestor was a bit more downcast and bearish when it came to making a lucky block price prediction. The site said that the token could have dropped to $0.0000159 by late September 2023.

When considering an LBLOCK token price prediction, it’s important to keep in mind that cryptocurrency markets remain extremely volatile, making it difficult to accurately predict what a coin or token’s price will be in a few hours, and even harder to give long-term estimates. As such, analysts and algorithm-based forecasters can and do get their predictions wrong.

What is Lucky Block? What you need to know about LBLOCK decentralised lottery project tokens