According to General Motors CEO Mary Barra, the global semiconductor shortage is still having an impact on the automaker, and the supply shortage is expected to last into 2023. As a result, GM’s vehicle sales in the first quarter fell compared with Q1 2021.

In addition, higher metal prices, which are a key material in vehicles and lithium-ion batteries, have pushed manufacturing costs higher, weighing on GM’s profit margin.

Are you interested in learning more about the GM stock outlook? Read on for our analysis for the latest analysts’ forecast and the latest GM stock news.

General Motors’ Q1 revenue rose to $36bn, up 10.8% on the same quarter last year, but net income fell by 2.7% year-on-year (YoY) to $2.9bn. As a result of higher production costs, the company’s adjusted earnings before interest and tax (EBIT) fell 8.4% YoY to $4bn. According to GM, operating costs:

“Increased primarily due to higher commodity and logistics costs, cost related to increased volumes, depreciation and investments in our growth and EV transition.”

With GM prioritising electric vehicle (EV) development and reinvesting cash flow, the company might not reinstate a dividend in 2022. The last GM stock dividend declared was in March 2020.

According to GM, its Chinese joint-venture, Wuling MINI Electric Vehicle, continued to be the top-selling EV in China. The company delivered 613,000 cars in China in Q1, accounting for 10.6% of the Chinese market share.

Despite lower sales, revenue was boosted by “strong pricing on [its] crossovers and trucks in a tight inventory environment”.

“Strong customer demand has continued into April with most vehicles turning immediately as they arrive at dealers,” said GM.

GM has increased its ownership of automaker Cruise to 80%. Cruise focuses on developing electric, self-driving technology. It operates in 70% of San Francisco, California, with plans to expand its operation across the entire city later this year.

Cruise began offering driverless rides in January 2022. It “has travelled in driverless mode about 40 times the distance from San Francisco to New York City”, according to GM CEO Mary Barra in her Q1 2022 letter to shareholders. Cruise could start charging for rides in San Francisco should it complete the permitting process this year.

What is your sentiment on GM?

Give GM a try

GM also expects to deliver record sales for its Bolt EV and electric utility vehicle (EUV) in 2022 in North America, even though Q1 sales only accounted for 0.3% of the US EV market.

Production and deliveries of the Bolt EV and EUV resumed in April after faulty EV battery modules were recalled in the third quarter of 2021. According to GM, dealers continue to repair customers’ vehicles with the default battery modules.

The carmaker also plans to rapidly scale production of the below six Ultium-based vehicles:

In March 2020, GM announced it had developed a new EV battery cell and platform called the ‘Ultium batteries’, which could enable a GM-estimated range of up to 400 miles or more on a full charge, with 0 to 60 miles per hour acceleration in as little as three seconds.

“Our biggest growth opportunity in North America is in electric trucks. We’ve led the full-size pickup segment for two consecutive years, and we will lead the EV truck market as well,” said Barra.

GM has also announced a global expansion of its affordable EV strategy in collaboration with Japanese carmaker Honda, using the Ultium battery technology. 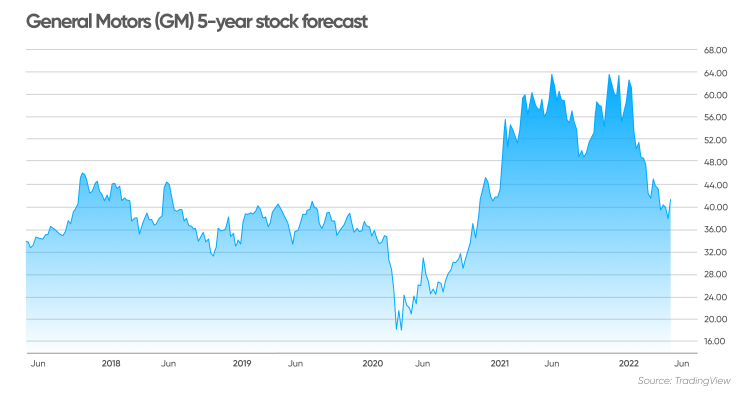 According to Market Beat, at the time of writing on 4 May, 17 of 22 Wall Street analysts surveyed had a ‘buy’ consensus rating for GM stock, while five recommended ‘hold’.

In contrast, AIPickup’s GM share price forecast was bearish for the next 10 years, suggesting that the group share price could fluctuate, with the average below $42.

When considering whether to invest in General Motors company stock, you should always do your own research, considering the outlook and relevant market conditions. A number of factors dictate whether stock prices rise or fall, including the company’s fundamentals and broader macro-economic factors. There are no guarantees. Markets are volatile. You should conduct your own analysis, taking in such things as the environment in which it trades and your risk tolerance. And never invest money that you cannot afford to lose.