The latest ETH analysis: will Ethereum rise at the end of 2020?

Ali Raza
For traders News and features Analysis The latest ETH analysis: will Ethereum rise at the end of 2020?
Rate this article
Share Article

Ethereum in 2020: what has happened to the coin so far this year

This has been an exciting year for the crypto market, particularly for some of the largest, top-ranking coins. Bitcoin (BTC) has already hit a new all-time high, and is currently trying to breach a major resistance and go even further.

In the meantime, Ethereum’s ETH has also seen massive improvements.

The coin started the year with the price of only $132 on January 1, 2020. 12 months later, its price went up by nearly five times, currently sitting at $650. While the coin is still not even halfway to its own all-time high, it has made significant achievements towards getting there.

Right after the start of the year, ETH participated in a strong rally that took its price from the mentioned level of $132 to $281. The coin was attempting to reach the $300 mark, getting quite close to it before the rally ended, and a correction hit.

Ether even managed to resist the correction for the most part, and it attempted another surge, reaching similar levels as the first time around. Unfortunately, that was when the mid-March price crash hit, caused by the coronavirus pandemic and the global economic crisis.

ETH was affected rather badly, dropping to a new YTD low, even going below the January 1 levels. Fortunately, this did not last for long, and over the next few months, the coin saw relatively steady price growth.

It reached the resistance at $200 around May 1, and it spent nearly the entire month of May trying to breach it. After succeeding, it was once again stopped by a resistance at $250, which kept it down until the second half of July.

Around July 20, the ETH price managed to break out and skyrocket to its next major resistance at $400. It reached this level just as the first week of August ended, and it kept trying to break it for months, finally succeeding in the early days of November 2020. 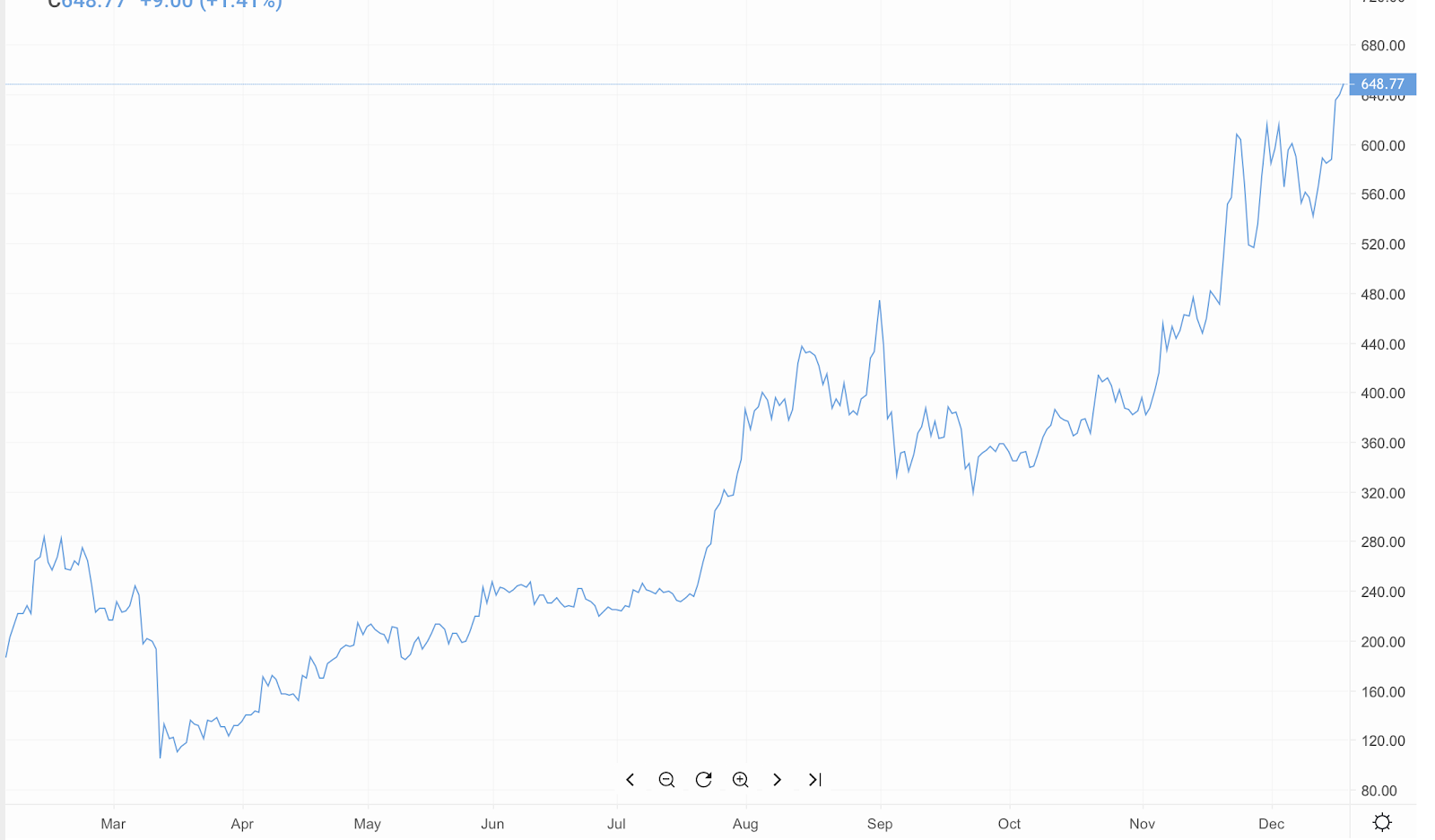 The success came thanks to another rally that took ETH up by $200, allowing it to hit its next major resistance, at $600. This one rejected its price rather strongly, sending the coin down to a support at $500. Fortunately, the support held, and ETH bounced right back up. It did not manage to breach the resistance immediately, but it did stick around, making numerous new attempts. It finally broke the barrier a few days ago, around December 16.

Considering that this was also when BTC hit its new all-time high, it is likely that the enthusiasm in the crypto community had a positive effect on ETH, as well.

The big question now is what will happen to the coin next, and will Ethereum price jump before New Year?

Questions like “Will Ethereum price rise?” are all too common these days, and the answer is – it is possible. The coin has had a lot of positive development lately, even though it disappointed its community by constantly delaying ETH 2.0 launch.

But, the crypto market remains as unpredictable as ever, so the best that anyone can do is try to draw conclusions from the recent news and developments.

Pretty much everyone in Ethereum's community was looking forward to late 2019, as Ethereum 2.0 was long overdue even back then. However, the launch of the project was delayed, as developers decided that they need more time to work on the upgrade.

They postponed the launch for early 2020, only for it to be postponed again — this time without a date or time of the launch. The community was frustrated, and some even considered switching projects, as it seemed bad for Ethereum to constantly give promises and never deliver on them.

Fortunately, the second half of October saw the arrival of Ethereum 2.0 deposit contract. This was a huge thing for the coin's community, as it meant that the launch of ETH 2.0 was close. In fact, the launch of the deposit contract was Phase 0 of the process that will result in the upgrade's arrival.

When the contract launched, however, it did not seem like there is any interest in depositing the tokens. This came as a bit of a shock, but after the initial hesitation, the coins started flowing in after all. Only a week after launch, the contract hit $22.5m, with over 50,000 ETH deposited. These days, the contract holds over $1bn.

After Phase 0 ended up being a success, the next step was scheduled for December 1, 2020 and ETH did not disappoint this time, either. This date marked the launch of ETH 2.0 Beacon Chain. Now, delivering such a massive upgrade will take time, and the team will go through several phases in total, bringing new features and options, improving the network's scalability, getting rid of mining by the introduction of staking, and more.

What happens next: will Ethereum rise?

Of course, technical improvements aside, people still want to have answers on “Will Ethereum go up or not?” For that reason, everyone has been trying to deliver their own Ethereum price analysis and give forecasts for the future.

Capital.com’s chief market strategist, David Jones, made his own Ethereum analysis for the rest of 2020, reviewing the technical indicators to set up a potential ETH trade.

What to expect from ETH price in 2021 and beyond?

Let’s look at some major predictions for the ETH price in 2021 and beyond. TradingBeasts gave a rather optimistic outlook, noting that the coin’s average price will drop from the current levels by about $100 in January 2021, only to climb back up and reach $626 by the end of next year. In December 2022, they expect the price to hit $758, and finally to rise to $906 by December 2023.

Wallet Investor has a more optimistic view on the coin’s future, expecting the price to hit $764 by next December, and to set a new all-time high at $1,486 in December 2025.

CryptoGround also shares Wallet Investor's five-year prediction for ETH, expecting it to hit $1,445 by late 2025. As for their 2021 prediction, they believe ETH will drop down to lower $200 levels, ending the next year with a price of $256.

One way for traders to get their hands on Ether and try to profit from its price fluctuations is by trading the coin with contracts for difference (CFDs) at Capital.com.

If you expect the ETH/USD rate to fall, you can open a short position, whereas if you expect it to make further gains you can go long.

Learn more about CFD trading with our free online courses and find out how to trade ETH CFDs with our comprehensive guide. Open a trading account with Capital.com and stay on top of the latest Ethereum technical analysis to spot the best trading opportunities.

Read more: Bitcoin reached an all-time high: is now the time to get involved?

Capital.com The latest ETH analysis: will Ethereum rise at the end of 2020?