News and Analysis News Stocks Electronic Arts stock forecast: What next for the FIFA developer?

Electronic Arts stock forecast: What next for the FIFA developer?

The video gaming industry – which many consider a recession-proof sector – is starting to show signs of weakness on decreasing discretionary spending from US consumers.

In August, EA reported lower-than-expected net bookings forecast for the September quarter. So far in 2022, EA stock price has lost nearly 13% of its value year to date, as of 22 September 2022 close.

The company’s gaming portfolio includes brands that are wholly-owned such as Apex Legends, Battlefield and The Sims, or licensed from others such as Madden, Star Wars and FIFA.

By region, international markets accounted for nearly 57% of EA’s net revenue in the June quarter. North America accounted for the remaining 43% of its quarterly revenue.

Two major drivers for the video-gaming industry in the post-pandemic era have been the gaming companies benefiting from stay-at-home restrictions, and a sector-wide consolidation via mergers and acquisitions.

Microsoft’s (MSFT) mammoth $69.7bn acquisition of Activision Blizzard (ATVI) made Microsoft the world’s number-one gaming company by market capitalisation, behind Tencent and Sony, according to CompaniesMarketCap.

With Microsoft’s Xbox and Sony’s Playstation dominating the gaming-console business, industry experts expect Electronic Arts to be the “hot commodity” on the market due to “the appeal of EA’s strong video-game library”, according to Bloomberg Intelligence analyst Amine Bensaid.

In late-August 2022, there were rumours suggesting that tech giant Amazon (AMZN), which owns popular game streaming platform Twitch, is planning to make an acquisition bid for Electonics Arts. EA stock price jumped 3.6% on 26 August on the news. However, a media report from CNBC quickly quashed the rumour.

While Activision Blizzard has outperformed its industry rivals by gaining over 14% year to date, as of 23 September, on the back of its acquisition by Microsoft, Electronics Arts has not seen any concrete acquisition-related tailwind to help its stock price appreciate in 2022.

Increased competition, easing stay-at-home restrictions and the flop of its flagship game Battlefield 2042 has dragged EA stock value by more than 12% in the past year, as of 22 September. Along the way, EA stock hit a one-and-half-year low of about $109 in early May 2022.

Looking back at Electronic Arts’ historical stock price performance, the all-time high stands at $151.26, achieved in July 2018. The stock is more than 22% below its record level, based on the 22 September close of about $117. 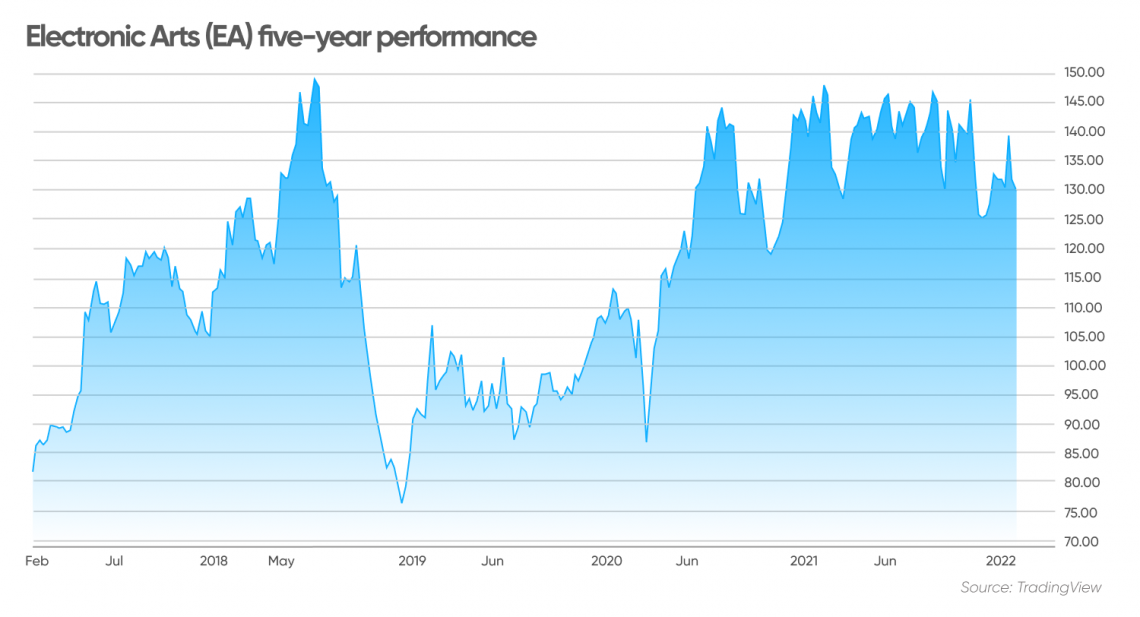 In its latest quarterly earnings release, Electronic Arts reported total net revenue of about $1.77bn for the June 2022 quarter, up from $1.55bn a year ago. Quarterly net income jumped over 50% to $311m.

However, investors were left disappointed by lower-than-expected quarterly net booking forecast of about $1.725bn to $1.775bn for the September 2022 quarter, compared to analyst expectation of $1.87 bn.

Experts see increased household expenses and a potential recession affecting video games sales putting to test the belief that the gaming industry is a recession-proof one.

“We are living in interesting times. And while, generally, the video game market can be at least partially insulated from factors impacting the wider economy, the return of experiential spending and higher pricing in everyday spending categories appear to be impacting the space,” said research firm NPD.

NPD added that US consumer spending on video game hardware, content and accessories in 2022 is projected to decline 8.7% compared to 2021.

113.19 Price
-1.420% 1D Chg, %
Trade now
Swap Short:
Swap Long:
Trade now
“Some of the drivers of the decline include the return of experiential spending, higher prices in everyday spending categories such as food and fuel, the uncertain supply of video game console hardware and certain accessories such as gamepads, and a lighter release slate of games, among others,” said NPD.

In its international markets, EA faces foreign currency-related headwinds. Revenue from international markets, which accounted about 57% of net revenue in the June 2022 quarter, will see a fall once converted to US dollar terms (USD) due to the appreciation of the USD on the back of an aggresive interest rate hike policy by the US Federal Reserve (Fed).

As of 23 September, the US dollar index (DXY), which tracks the performance of USD against a basket of a majot world currencies, has jumped 17% year to date to its highest in over 20 years.

EA will be hoping upcoming gaming titles such as Need for Speed will help boost its earnings after its flagship title Battlefield 2042 tanked on release.

Earlier this year, the company was forced to cut its net revenue guidance for full-year ended March 2022 due to the “disappointing” sales of Battlefield 2042.

“We did have a challenge in Q3 as the launch of Battlefield 2042 did not meet expectations … Some of the design choices we made with the game also did not resonate with everyone in our community,” said EA chief executive Andrew Wilson on 1 February 2022.

According to rating website Metacritic, Battlefield 2042 holds a user score of 2.8, with more than 70% of reviewers posting a negative rating for the game.

There is also uncertainity over how consumers will react to the end of EA’s popular FIFA franchise following the end of its 20-year licensing partnership with the global football organisation.

FIFA 23 released in September 2022 will be the last FIFA football game by EA. From 2023 onwards, EA will release football games under a new EA SPORTS FC brand.

EA has retained licensing partnership with more than 300 organisations, including the UEFA, Premier League, La Liga and Bundesliga.

Research firm Mordor Intelligence said in a report: “The gaming market was valued at $173.70bn in 2021, and it is expected to reach a value of $314.40bn by 2027, registering a CAGR of 9.64% over 2022-2027. Due to nationwide lockdowns implemented because of the Covid-19 pandemic, some people turned to game platforms to pass the time. Thus, these platforms attracted hundreds of thousands of new visitors to online traffic. Recently, video gaming trends experienced a massive surge in players and revenue.”

With regards to M&A in the gaming sector, Piers Harding-Rolls, an analyst at Ampere Analysis, said in an interview with CNBC following multi-billion acquisitions from Sony and Microsoft in recent months: “I think we’ve got a perfect storm. I’ve been covering this sector for 20 years and I've never seen anything like it.”

Brian Murphy & Einav Mor-Samuels, of Appsflyer, said the main drivers of the M&A boom in the gaming sector are “the pandemic-fuelled gaming landscape, a red-hot investment environment and mega studios striving to increase their UA (user acquisition) in a new privacy-centric reality.”

JP Morgan said in a note on Electronic Arts: “EA is benefiting from the secular trends of increasing digital full-game downloads that have ~20% higher margins than physical disc sales, increased monetisation of existing games with rapidly growing and higher-margin live services, a steadily growing and profitable mobile business, and increased consumer interest in video games as an entertainment option, with higher-quality and more engaging games, creating an expanding global player network.”

However the investment bank warned that the company has a relatively weaker track record of execution compared to its peers.

According to research company Morningstar’s Sustainalytics ESG Risk Rating Report, Electronic Arts is rated “low risk”. The report added: “The company is noted for showing particular strength in the quality and integrity of its board/management and its audit and financial performance systems.”

However, Morningstar said EA is “exposed to cybersecurity risks including hackers gaining access to proprietary company information, such as source code for its games, and selling or leaking it on the web.”

Outlook: Electronic Arts stock forecast for 2022 and beyond

In its EA stock forecast, investment firm Jefferies rated Electronic Arts a ‘buy’ and set a price target of $165.

Andrew Uerkwitz, equity analyst at Jefferies, said EA stock price could stay “range-bound” until the company gives more clarity on the release and execution of its upcoming gaming titles, which includes Need for Speed, an unnamed “major IP” which Uerkwitz expects to be Star Wars: Jedi Survivor,  and an unnamed “partner title”.

Meanwhile, data firm Trading Economics said its global macro models projections and analyst-based Electronic Arts stock predictions saw the stock trading at $118 by the end of September 2022 and at $107.95 a year later.

Note that analysts’ Electronic Arts stock forecasts can be wrong – they shouldn’t be used as a substitute for your own research.

Always conduct your own due diligence and remember that your decision to trade or invest should depend on your risk tolerance, expertise in the market, portfolio size and goals. Never trade money that you cannot afford to lose.

Netflix stock forecast: When will the streaming giant recover?