Disinflation vs deflation: What falling prices could mean for your investments

While inflation is likely to haunt the markets for the rest of 2022, terms like “disinflation” and “deflation” are slowly starting to trend as new market narratives take shape.

Investors remain divided over the outcome of the US Federal Reserve’s (Fed) rate hike policy. Many remain optimistic that the Fed can pull off a soft landing as early signs of slowing inflation begin to take shape in the form of falling commodity prices.

Yet some believe that recession is imminent due to the Fed’s do-whatever-it-takes approach towards taming inflation, which could lead to disinflation.

For now, the Fed’s ultra-hawkish stance has helped bring down copper prices to 17-month lows. Aluminium prices, which hit all-time high levels over three months ago, have fallen over 30% from the peak. Crude oil prices have also shown signs of easing. 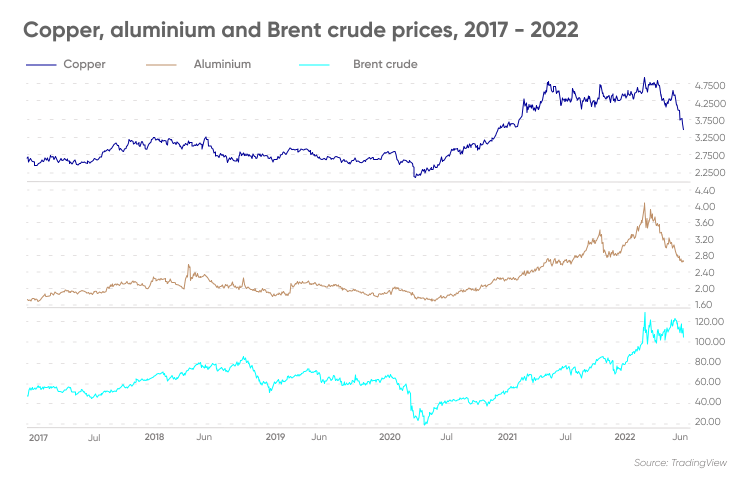 To compare disinflation vs deflation, it’s essential to understand both terms. While they sound similar at first glance, disinflation and deflation refer to very different economic processes.

Deflation is the decline in prices of goods and services. It is the opposite of inflation, as the purchasing power of money rises in a deflationary environment.

According to the Asia Development Bank’s deflation definition, the decline in prices can emerge from improved productivity, technological advances, changes in policies, drop in commodity and energy prices, excess capacity and weak demand.

How does deflation affect the stock market? Extended deflationary economic conditions are detrimental to stock markets, as the falling prices of goods and services cause corporate profit margins to shrink, leading to business failures and unemployment. Furthermore, rising unemployment reduces consumer purchasing power, causing prices, output and demand to fall.

Japan, which has been suffering from prolonged deflationary economic conditions since the 1990s, is the most widely quoted deflation example.

According to the Bank for International Settlements’ report, the island nation’s “chronic deflation” is a result of a combination of developments, including falling inflation expectations, low interest rates, banking risk aversiveness, an ageing population and the ill-effects from numerous global economic crises.

The Japanese benchmark equity index Nikkei 225 (Japan 225) has not yet recovered its record peak of 38,512 achieved in 1989. Following the Japanese asset price bubble burst and onset of deflationary economic conditions, it is taking the index over 30 years to return to those levels.

Chronic deflationary environments tend to discourage investment and spending. Cash in hand or in the bank becomes the choice of investment for many during these conditions. 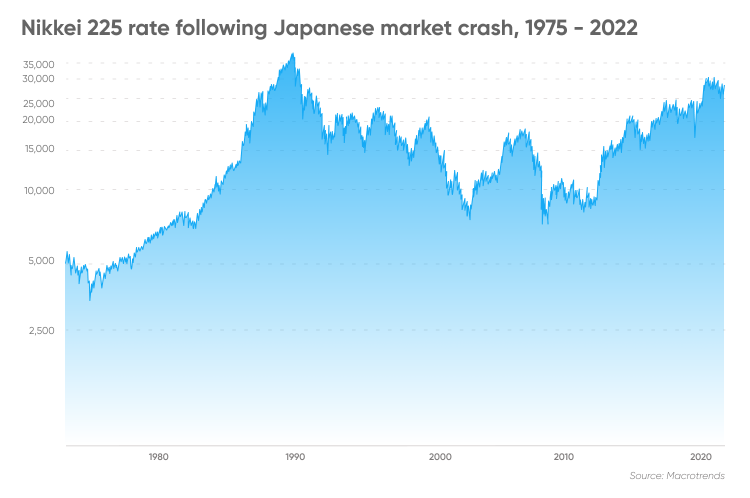 Disinflation is a temporary slowing of inflation. Unlike deflation, disinflation doesn’t refer to the rise or fall of the price directly, but rather to the slowing rate of price growth.

According to the Federal Reserve Bank of San Francisco’s deflation definition, it “represents the opposite of inflation, which is defined as an increase in the overall price level over a period of time”.

On the other hand, disinflation means a period when the inflation rate is positive, but declining over a period of time.

Disinflation is considered necessary during highly inflationary conditions as it normalises consumer inflation expectations and prevents the economy from overheating. However, prolonged disinflation can result in the rate of inflation slowing to near zero, and thereby increasing the risk of deflation.

In the post-pandemic era, inflation in the US ran to over 40-year highs, which prompted the Fed to embark on an aggressive monetary tightening cycle in a bid to tame rising costs.

US inflation showed signs of disinflation in the first quarter of 2021. As data showed, the consumer price index (CPI) fell in April compared to March. However, hopes for a quick ease in inflationary pressures came to an end just a month later as CPI data showed consumer prices accelerated in May and came in higher than market expectations. 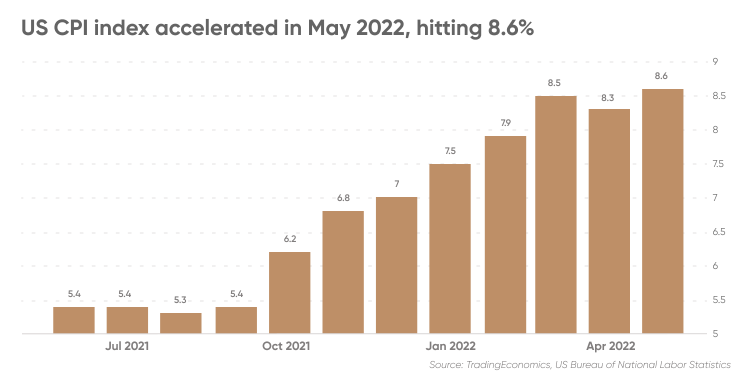 May’s higher-than-expected inflation data prompted the Fed to increase rates by 75 basis points (bps) in early June. The Fed’s first 75 bps rate hike in over 30 years saw a sharp sell-off in equity markets, which now fear that the rate hike cycle will cause disinflation and recession for the US economy.

Benchmark oil futures Brent crude and US West Texas Intermediate (WTI; US Crude) have fallen from their multi-year highs of $138 and $126, respectively, reached in March 2022 on supply concerns following the start of the Russia-Ukraine war.

As of 5 July, Brent crude and WTI are trading around $107 and $102, respectively, as attention has shifted from supply concerns to demand weakening due to a possible global recession. 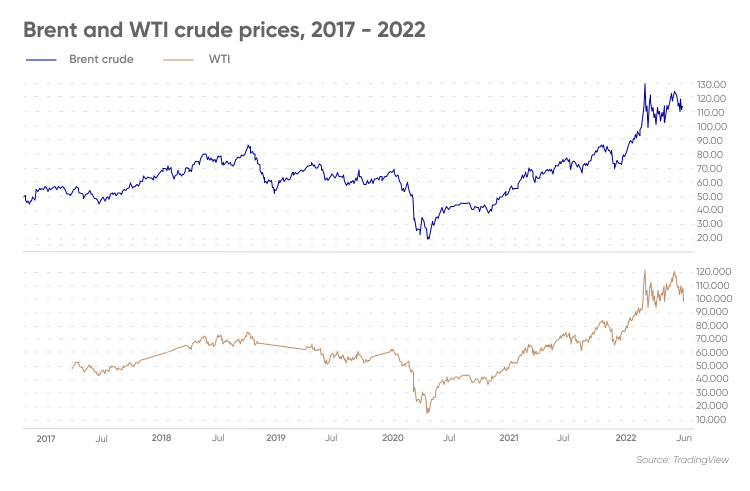 However, crude oil prices still remain near eight-year highs and above the $100 mark. Dutch bank ING said that “constructive oil fundamentals continue to counter the weakening macro environment at the moment” as OPEC members continue to miss agreed production levels.

While the ultra-hawkish stance of the Fed has dented the energy demand outlook, speculators could think twice before betting on a crash in oil prices. Supply-side support still persists for crude oil price in the form of an ongoing Russia-Ukraine war and tepid OPEC production.

No other industrial metal reflects the current disinflationary environment better than copper. The metal hit a 17-month low in early-July to trade below $8,000 per tonne.

“Copper, which is seen as an economic bellwether, ended the week down nearly 4% as investors appear convinced that tighter monetary policies will see economic growth weaken,” said ANZ Research in a note published on 4 July.

The copper-to-gold ratio, which is used as a gauge to measure the health of business cycles and is calculated by dividing the market price of an ounce of copper to that of an ounce of gold, has been falling sharply in 2022.

“During the expansion phase of an economic cycle, the copper-to-gold ratio tends to rise as increasing industrial production stimulates the demand for copper. In contrast, during a downturn, gold tends to outperform, lowering the copper/gold ratio,” said Piero Cingari, analyst at Capital.com.

Other industrial metals have seen similar weakness. Aluminium prices have fallen over 30% from their all-time high hit in March 2022 as weakness in demand from top consumer China continues to hurt prices. Iron ore prices continue to tumble in 2022 on souring demand outlook and rising inventories in Chinese steel mills.

Freight rates, which are the prices at which cargo is delivered from one point to another, have eased in line with commodity and energy prices in 2022.

In 2021, the Baltic Exchange Dry, a shipping and trade index that measures the cost of transporting goods, reached its highest level in over 13 years amid shipping congestion as key ports in China were shut down for weeks due to China’s strict zero-Covid policy. 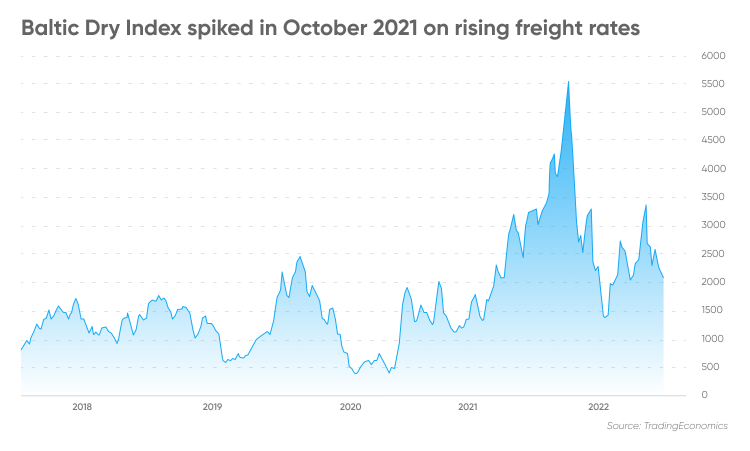 Surging shipping rates and port congestion resulted in inflationary pressures and supply-chain shortages as the world recovered from the Covid-19 pandemic.

As of 5 July 2022, the index has fallen about 60% below the October 2021 peak, with data indicating that shipping rates fell significantly in June. The recent decline in freight rate is following “normal seasonality”, according to the Baltic Exchange.

It remains difficult to predict whether the disinflation seen in freight rates will continue. While global demand outlook and economic growth expectation have been lowered due to the ongoing global monetary tightening cycle, the freight industry is still suffering from lingering effects of the pandemic.

“The global supply chain continues to be plagued with severe congestion, which in turn has ramifications for the supply/demand strength of the ocean related part of container shipping,” said Lars Jensen, chief executive of Vespucci Maritime in a post for the Baltic Exchange.
“Yet despite the seasonally lower volumes, the operational improvements in the supply chain have only reduced the problems to the same level as seen immediately prior to peak season 2021.

This means that even a modest peak season has the potential to dramatically worsen congestion, which in turn will remove capacity and send freight rates spiralling.”

However in 2022, the Fed’s quantitative tightening cycle is starting to sap liquidity from financial systems. The housing market is considered the most rate-sensitive sector and economic data is indicating that rising interest rates are cooling housing demand.

In April, sales of new US single-family homes slumped to a two-year low as home buyers became hesitant on higher mortgage rates.

“With monthly mortgage expenses up about 50% from only a few months ago, fewer buyers are now competing for continually limited inventory,” Hepp added.

Goldman Sachs Research said the housing market has headwinds in supply remaining tight in many geographies including US, Canada, UK and New Zealand.

“Taken together, there are strong signs that the surge in housing sales and prices during the pandemic has come to an end. Goldman Sachs Research expects growth in advanced economies to slow in coming quarters and the recent housing trends only reinforce that expectation,” they noted.

Oxford Economics have cut their global property return forecast to an average 7.4% over 2022-2023, two percentage points below the forecast in April. However, a lot depends on the outcome of the Russia-Ukraine war.

“Conversely, under a post-ward rebound scenario, all-property returns jump nearly 2ppts (percentage points) above the baseline by 2023, averaging 9.4% per annum over the next two years,” the global economic house in the forecast published on 6 July.

While the slump in commodity prices and cooling housing demand may signal the start of a disinflationary period, there are a lot of factors at play. Supply-side pressures will largely depend on the duration and outcome of the Russia-Ukraine war, and fall in freight rates may peak up in line with seasonality, fuelling inflation.

Note that analysts’ predictions can be wrong. Forecasts shouldn’t be used as a substitute for your own research. Always conduct your own due diligence before investing or trading. And never invest or trade money you cannot afford to lose.

Investing during inflation: Where to hide?

Bank of England interest rates: How high will they go?

Capital.com Disinflation vs Deflation | What Falling Prices Could Mean for Your Investments