Who owns the most Binance USD crypto? BUSD tokens on march to dominate stablecoin market

Binance USD (BUSD) has become one of the most popular stablecoins, supported by patronage from the world’s biggest cryptocurrency exchange, Binance.

In September 2022, Binance announced that it will end support for the stablecoins USDC, Pax Dollar (PAX) and TrueUSD (TUSD), and will convert customer holdings of them to BUSD on a 1:1 ratio by the end of the month.

In this article, you will find important information you need to know about BUSD. Who are the biggest Binance USD holders? What does the future hold for stablecoins like BUSD after the TerraUSD (UST) saga? Let’s find out below.

What is your sentiment on BUSD/USD?

What is Binance USD? 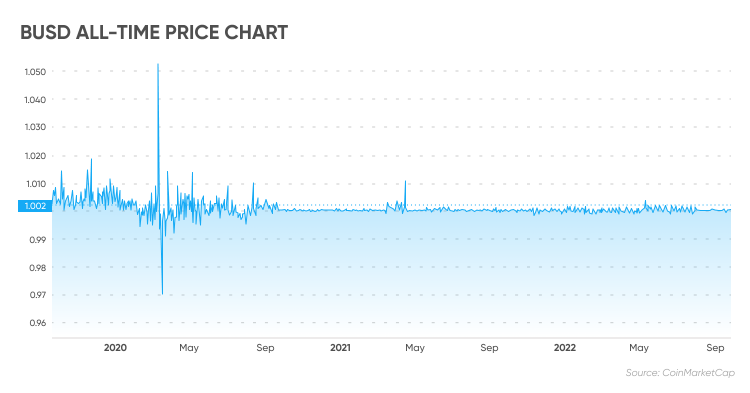 BUSD is pegged to and collateralised by the US dollar. It is issued on multiple blockchain networks, including Ethereum (ETH), BNB Chain (BNB), Polygon (MATIC) and Avalanche (AVAX).

Binance USD was created in 2019 by a collaboration between cryptocurrency exchange Binance and blockchain infrastructure company Paxos.

Paxos is the USD custodian and issuer of BUSD. The company is responsible for performing regular audits to ensure the US dollar reserves held are equal to the supply BUSD at a 1:1 ratio.

According to Binance, BUSD provides a monthly audited report of USD reserves in compliance with regulatory standards.

The Paxos website claims its stablecoin operations are regulated by the New York State Department of Financial Services as a trust company.

Data from CoinGecko showed BUSD was the fourth-most available stablecoin on the market, with 132 centralised and decentralised crypto exchanges listing BUSD, as of 30 September. It was behind USDT, USDC and DAI on the data provider’s list.

Who owns the most Binance USD?

USD is issued on the Ethereum blockchain as an ERC-20 token and on the BNB chain as a BEP-20 token. As of October 2022, the majority of BUSD in circulation were on Ethereum.

Blockchain data on EtherScan revealed that a wallet address identified as Binance was the biggest holder of BUSD, with holdings worth $12.3bn, equal to 58% of the stable coin’s circulating supply on Ethereum, as of 1 October 2022.

Of the five top holders of Binance USD, only one was not identified as belonging to Binance. The unidentified wallet address held BUSD worth $1.64bn.

Binance-linked wallet addresses held BUSD worth over $18bn, representing over 85% of BUSD circulating on the Ethereum blockchain.

On the BNB Chain, an unidentified wallet was the largest BUSD holder, with holdings worth $1.01bn, BscScan data showed.

It should be noted that while blockchain data is transparent and wallet balances are viewable to the public, the identity of the wallet address holder remains anonymous.

Stablecoins like BUSD do not have a capped supply. A BUSD is issued for every one US dollar of customer deposit.

As of 1 October, the circulating supply of BUSD stood at over 21.04 billion tokens, data from CoinMarketCap showed.

In early September 2022, Binance announced that it was removing support for the USDC, Pax Dollar (USDP) and TrueUSD (TUSD) stablecoins on all its products.

The world’s biggest cryptocurrency exchange said it will convert the existing user balance of unsupported stablecoins to BUSD by the end of September 2022.

DAI – an overcollaterised crypto-backed stablecoin pegged to USD – was the fourth largest stablecoin and had a circulating supply of 6.9 billion, as of 1 October 2022.

Stablecoins play an important function in bridging the traditional financial system and the decentralised digital blockchain world. The market capitalisation and supply of stablecoins could increase on the back of the growing popularity and adoption of cryptocurrencies.

CoinMarketCap data showed the current market cap of the stablecoin sector stood at $152.2bn, equal to over 16% of the global crypto market cap, as of 28 September.

The ownership of stablecoins like BUSD has grown amid the rise of cryptocurrencies. The rise of stablecoins in recent years has alarmed central banks and authorities. They have stepped up efforts to regulate the sector and explore the development of central bank digital currencies (CBDCs).

In November 2021, the US Department of the Treasury published a report wherein the agency presented risks posed by stablecoins to financial systems and the broader economy, noting:

The internal dynamics of a stablecoin run, as well as the potential implications of such a run for the financial system and broader economy, would likely depend on the volume and liquidity characteristics of reserve assets sold, as well as on broader economic and financial conditions. Some stablecoin arrangements are already sizable, and many stablecoins are growing.”

Following the collapse of algorithmic stablecoin TerraUSD (UST) in May 2022, stablecoin regulation has come under the spotlight.

Japan became the first nation to introduce stablecoin regulations in June. The new Japanese law stated that only licensed banks, registered money transfer agents and trusted businesses can issue stablecoins. The bill also stated that stablecoins must guarantee holders the ability to redeem the asset at face value.

In September 2022, the US Department of the Treasury published another report calling for “appropriate regulation and oversight of stablecoins and stablecoin arrangements” to address the risks posed by stablecoins.

Moreover, authorities in several regions, including the US, EU, China, and India, are developing CBDCs in a bid to counter the growth of cryptocurrencies and stablecoins. It remains to be seen whether CBDCs will pose a threat to stablecoin market growth.

“Most likely there will be some form of coexistence,” said consulting firm McKinsey & Company in an October 2021 report.

“Ultimately the fate of CBDCs and stablecoins may be decided by the significant forces of regulation and adoption.”

Furthermore, Binance’s decision to convert all customer holdings of USDC, USDP and TUSD to BUSD has been called “uncompetitive” by its critics and has highlighted the lack of regulation in the sector.

“Binance’s auto-conversion of USDC isn’t unprecedented, but it might be anti-competitive. The probability that traders will bother to convert away from BUSD is low when it’s all worth $1 anyway – but without any regulators, who’s left to object?” tweeted Bloomberg journalist, Emily Nicolle.

Stablecoin ownership statistics should not be the key reason behind your decision to buy a cryptocurrency. Whether USDC is a good investment for you should depend on your investment goals, risk tolerance, and the size of your portfolio. It is important to do your own research before making any investment or trading decision. And never invest or trade money that you cannot afford to lose.

What could Janet Yellen’s departure mean for crypto?