Q1 results: Wake up and smell the coffee

Starbucks stock forecast: Can the founder's return halt the slide?

News that founder Howard Schultz was returning to lead the global coffee company Starbucks (SBUX) gave the stock price a brief moment of joy in what has otherwise been a disappointing 2022.

Starbucks' stock had been recovering well from the impact of the pandemic including hitting an all time high last July. But having opened 2022 on $116 the stock today (11 April) is at $81.55 a drop of nearly 30%. That includes a fall of 11% in April alone despite the news of Schultz's return as chief executive officer.

He is likely to be combative on employee moves to form trade unions within the company.

The company he founded in 1971 has grown from a single Seattle coffee roaster to a global chain of 32,000 coffee shops in 80 countries. Although the pandemic changed patterns of demand, Starbucks reported surging sales figures in its first-quarter results released on 1 February 2022.

Could the unexpectedly high costs land the coffee chain in hot water, and what lies ahead for the Starbucks share price forecast in 2022?

After seeing strong growth over the course of 2019, the Starbucks share price fell by over 35% between January and March 2020 as Covid-19 restrictions shuttered coffee shops worldwide. 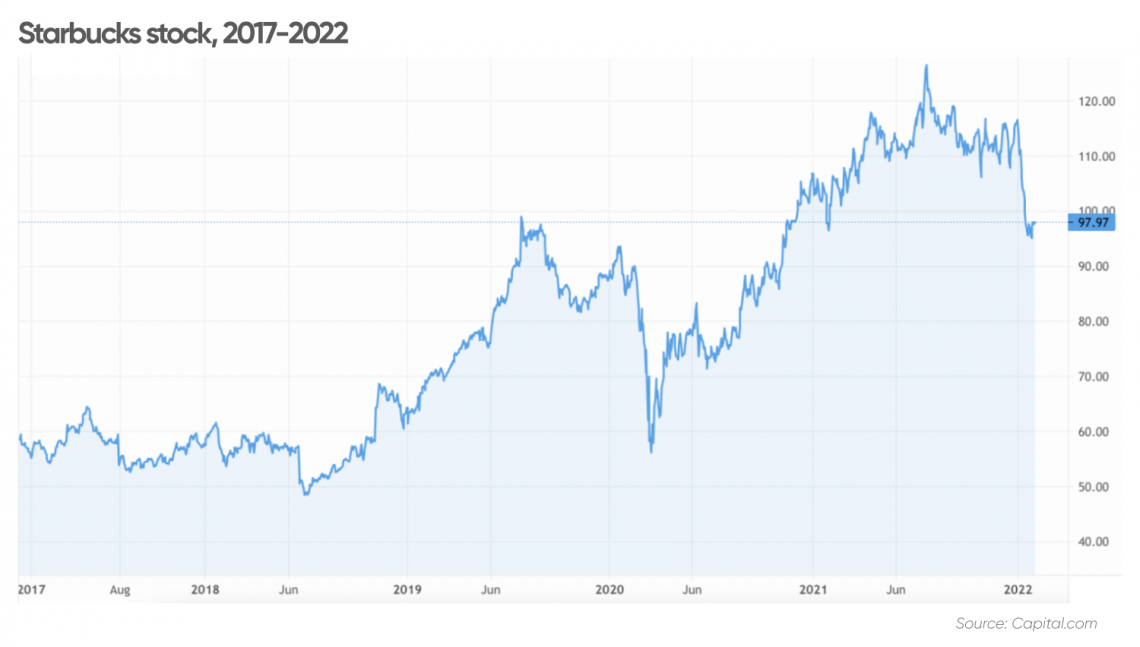 Starbucks shares have seen significant price volatility since then, falling in late October following the release of mixed fourth-quarter results.

December 2021 saw the share price tumble below $110 as investors reacted to the news that employees in one of Starbucks’s Buffalo stores had voted in favour of union representation. The uncertainty surrounding increased union activity spooked those looking to invest in Starbucks, and the share price continued to trend downwards over the course of January 2022.

Following the first-quarter results release on 1 February 2022, the Starbucks share price experienced limited movement, with the price rising by 0.45% over the course of the trading day

The relative strength index (RSI) for Starbucks is currently neutral at 38.22. Though an RSI below 30 signals that an asset is being oversold and undervalued, it does not currently suggest that the SBUX share price is due an upward price correction.

Q1 results: Wake up and smell the coffee

Recent SBUX news was dominated by the first-quarter results released on 1 February 2022. The coffee chain reported net earnings of $815.9m, up from $622.2m in the prior-year quarter.

Sales figures were strong, with comparable store sales up by 13% on the prior-year quarter, and by 18% over the same period in the US. US sales figures also represented a 12% increase on Q1 2020 figures, suggesting that the Covid-coffee boom is showing no sign of slowing.

But it wasn’t all plain sailing. Costs were impacted by greater-than-anticipated inflation and Covid-19 related pay and staffing costs. Starbucks reported GAAP (generally accepted accounting practices) diluted net earnings per share (EPS) of $0.69 in Q2, while non-GAAP EPS was $0.72, both missing analyst expectations of $0.80 per share.

One of Starbucks’ greatest strengths is its ability to move with customer demand. From its origins as a single store brewing roasted coffee in Seattle, it has expanded to sell coffee from 32,000 stores in 80 countries and offers menu items as varied as White Chocolate Mocha Frappuccinos and Strawberry Acai Refresher.

This novelty is not lost on customers. A recent report from location data analytics firm Placer Labs shows that Starbucks experiences a seasonal surge each year, with visits soaring during the Hallowe'en ‘Pumpkin Spice Latte’ season.

As the report stated, “Starbucks knows how to leverage people’s natural loss-aversion – FOMO (fear of missing out), to use millennial-speak – by creating limited-edition drinks and cups, such as the now-classic red cups for the holiday season – so that customers feel like they are missing out when they do not partake in the time-sensitive offering.”

According to the Placer report, coffee showed itself to be a “proven necessity” in the US market over the course of the pandemic.

Although overall dining traffic was down by 1.8% between December 2019 and December 2021, coffee shops saw demand increase by 7.5% across the same period.

According to analysts at Placer, this growth is even more impressive given that the Omicron variant, and its persistent disruptions to work and school surged in December 2021. While people may be less likely to pick up a coffee on their way to the office, research from Placer suggests that late-morning visits have risen instead, accounting for more than a quarter of total demand.

First-quarter results revealed US same-store sales growth of 18% on a year earlier, and a 12% increase on a two-year basis. With users of its Starbucks Rewards programme increasing to 26.4 million representing a 21% annual increase, it looks like the coffee addiction in the US shows no sign of abating.

While Starbucks is reporting strong domestic demand, international markets are on less of a sure footing. Starbucks has a significant international presence, not least in China, where its footprint has grown to 5,400 stores in over 200 cities across the Chinese mainland.

What is your sentiment on SBUX?

Give SBUX a try

With the rise of Omicron raising the potential for further restrictions, Starbucks’ international revenues could remain subdued for some time.

December saw Starbucks make the news as employees in two of its Buffalo stores voted to form a union. Starbucks was opposed to the move, preferring instead to work directly with employees.

“Our heritage and culture are built on the belief that by working directly together as partners, we can build a different kind of company,” said Rossann Williams, executive vice president and president of Starbucks North America, in a press release.

“Every success we have ever achieved has been in direct partnership with one another – without an outside party between us,” Williams added.

As well as raising the prospect of further unionisation in US stores, the vote also highlighted well-publicised issues with staffing, training, equipment and call-outs. This led Williams to comment: “There are serious gaps in too many other stores in this market that fall short of the Starbucks Experience and represent some of the most challenging conditions, over and above the everyday complexity Covid-19 has brought.”

Starbucks’ January SEC filing stated that “While the number of partners represented by unions is not significant, if a significant proportion were to become unionised, our labour costs could increase and our business would be negatively affected by other requirements that could increase our costs, change our employee culture, decrease our flexibility and disrupt our business”.

Amid these pressures, Q4 2021 saw Starbucks announce it would increase its average US retail hourly wage to almost $17/hr by summer 2022.

And first-quarter results saw the coffee giant report higher-than-expected costs contributing to total operating expenses of $6.9bn, up from $5.9bn in the prior-year quarter.

“Although demand was strong, this pandemic has not been linear, and the macro environment remains dynamic as we experienced higher-than-expected inflationary pressures, increased costs due to Omicron and a tight labor market,” said Starbucks president and CEO Kevin Johnson in a statement.

The average analyst price-target consensus for the time of writing was at $114.24, with SBUX stock price targets ranging from a low of $91 to a high of $135.

First-quarter results released on 1 February 2022 triggered a flurry of analyst activity. The next day, 16 analysts lowered their Starbucks price targets, although all revised price targets did remain above the report date share price.

The lowest revised price target came from Piper Sandler, who reduced their Starbucks price prediction ranges to $100–$108 (a 1.26% upside on the report date share price).

The highest revised-target prices came from analysts at Jefferies Financial Group with their $130–$142 target prices representing a 33% upside on the report date share price. 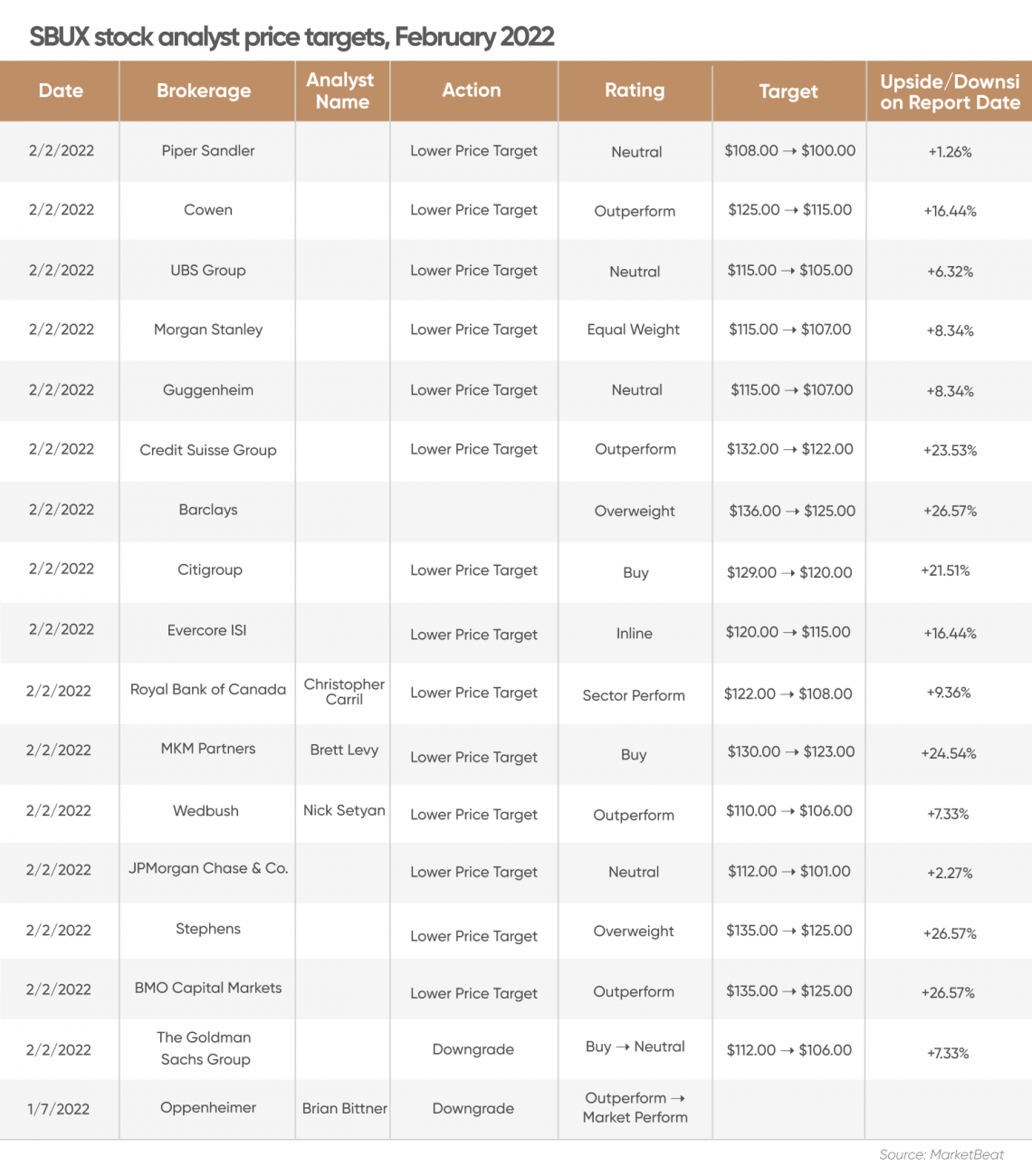 While analysts don’t normally give forecasts beyond 12 months, according to algorithm-based forecasting service WalletInvestor, Starbucks is a “good long-term investment”.

Capital.com Starbucks stock forecast: Have Q1 results given the share price a kick?