This article will discuss the most recent developments in the carbon emission market and attempt to construct a reasonable carbon price forecast for 2022 and beyond.

Carbon trading, also known as carbon emission trading, is the purchase and sale of credits that allow a company or entity to emit a certain amount of carbon dioxide (CO2). CO2 is released into the atmosphere as a result of activities such as burning coal, gas and oil, as well as slash-and-burn land clearing.

Under the Kyoto Protocol,  a UN climate treaty adopted on 11 December 1997 in Kyoto, Japan, carbon trade was the agreed tool to reduce emissions. Countries that have ratified the Kyoto Protocol are granted a limited number of permits to emit a certain amount of carbon dioxide. Countries with unused allotments can sell them to other countries that want to emit more carbon dioxide than their permits allow.

Carbon credits and carbon trading are authorised by governments to reduce carbon emissions, mitigating their contribution to climate change. 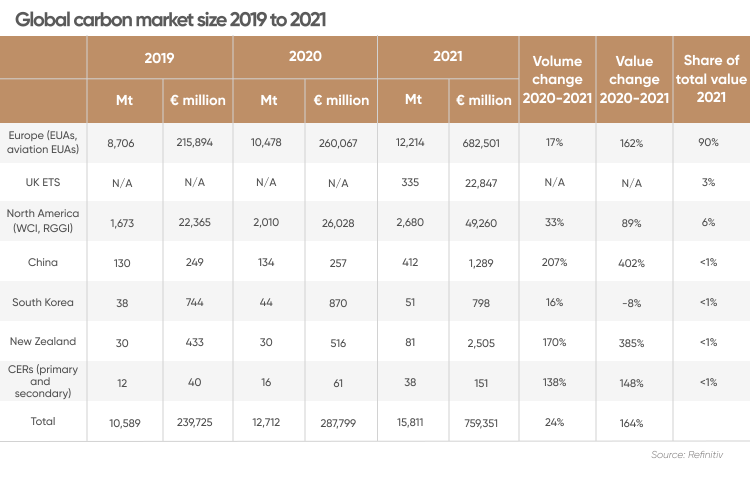 In addition to the instruments scheduled for introduction, Israel, Malaysia and Botswana announced their intentions to develop new carbon pricing instruments, and Vietnam outlined steps to set up an ETS.

Last year, the UK and China launched their national ETS. In China, as many as 2,000 power generators participated in the initial stage of its national ETS with official trading started in mid-July. In the first five and half months of trading, 179 metric tonnes (Mt) of Chinese emission allowances (CEAs) exchanged hands, according to Refinitive.

Natural gas supply shortages in Europe due to limited pipeline supply from Russia and liquefied natural gas (LNG) as cargoes were sent to Asia, combined with high demand, have led to a rise in gas prices in the continent to record high in the second half of 2021.

The elevated gas prices led to an energy crisis in Europe and provided incentives for power plants to switch to higher polluting coal. According to data by Refinitive, the share of both lignite (low calorific value coal) and coal in the EU27 energy mix rose to 8% in 2021, up from 7% and 6% respectively in 2020. Meanwhile the share of renewables dropped to 38%, from 40% in 2020.

The gas supply problem has dragged on into 2022 as conflict between Russia and Ukraine broke out on 24 February. Russia has stopped gas supply to several European countries, including to Poland, Bulgaria and Finland as the countries refused to pay for Russian gas in roubles.

The EU’s move to reform its carbon market is another key factor supporting EU ETS price. The European Parliament had proposed a series of reforms on its carbon market, including the creation of a new ETS that would target emissions from vehicles and buildings.

The reform is part of the EU’s target of 55% net reduction in greenhouse gas emission by 2030. 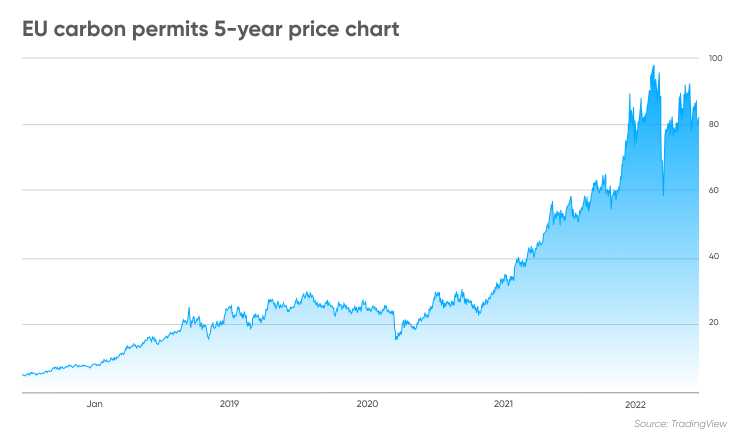 Despite the emergence of various emission trading systems, there is no fixed global carbon emission price. However, the EU ETS is seen as the benchmark. The continent is home to the largest carbon market by traded volume. EU ETS represents 90% of global turnover, according to financial analysis company Refinitive in its 2022 carbon market review released on 31 January.

The EU Allowance (EUA) – the price of one emission allowance that equates to one tonne of CO2 emissions – continued its rally during 2021 and into 2022.

What is your sentiment on ECFZ21?

Start trading
or
Try demo
“The gas shortage led to an energy crisis in Europe with strong margins for coal power generation: despite historically high coal and EUA prices, electricity generation from coal was highly profitable throughout H2. With limited supply of gas, a dwindling number of nuclear reactors, and little wind, coal has been running at near to full capacity – that has led to additional demand for EUAs.”

Another price driver in 2021, according to Refinitive, is a predicted tighter carbon credit supply-demand balance as a result of continuing revisions to make the EU ETS fit for the bloc's revised 2030 target of at least 55% emission reduction.

The continent’s carbon futures reached another new record at nearly €97/tonne in the first week of February as tightness in energy supply persisted.

The conflict between Russia and Ukraine has supported EUA prices at above €80/tonne on the prospect of increased use of coal and oil after Russia, Europe’s main gas supplier, used its gas to retaliate against the Western nations’ sanctions.

On 7 March, the EUA price dropped to below €60/tonne as concerns about industrial slowdown fuelled sell-offs, according to ANZ Research’s note. But the price gradually recovered to above €80 in the run-up to the European Parliament’s vote on the ETS reform package.

According to data from Ember, the EUA price fell to €79.81/tonne on 8 June after the EU Parliament rejected a proposed reform on the EU ETS.

Refinitive’s 2022 carbon emission market survey released on 1 June showed respondents estimated that the price of the EUA could average around €80 to €90 a tonne for the remainder of 2022.

Of the 253 respondents, 137 indicating involvement or interest in one or more carbon markets follow the EU ETS.

The financial analysis company attributed the continued rise in CO2 price outlook in Europe to participants’ positive view on EU ETS as a tool to reduce emissions. Other factors that drive EUA prices include energy markets, weather, compliance and non-compliance trading, and climate policy.

Policy signals such as the decision on the EU’s climate package and the reduced supply of allowances are factors considered to be of high significance by market participants.

“This year’s overwhelming degree of perceived importance of the natural gas price is notable,” Refinitive added.

The proportion of respondents who believe the EU ETS has a greater impact on Europe’s emissions than other variables reached an all-time high, with 80% of respondents giving it high priority, according to Refinitive.

Trading Economics, in its carbon price prediction, expected EU Carbon Permits to trade at €73.63 a tonne by the end of this quarter. The economic data provider forecast the carbon emission futures in Europe to trade at €83.74 in a year’s time.

When looking for a carbon price forecast, it’s important to bear in mind that analysts’ predictions can be wrong. Analysts’ views are based on making a thorough fundamental study of the asset’s performance. Past performance is no guarantee of future results.

When looking at It’s important to do your own research and always remember your decision to trade depends on your attitude to risk, your expertise in the market, the spread of your investment portfolio and how comfortable you feel about losing money. You should never invest more than you can afford to lose.