What is XDC coin?

Who is behind the XDC network?

XDC network coin price prediction for 2022 and beyond

Trade-finance focused blockchain network XinFin’s (XDC) token price increased over the past month after Panama approved a bill to allow cryptocurrencies as means of payment for any legal civil or commercial operation in the country. The bill was approved by the National Assembly on 28 April and will be signed into law by Panamanian President Laurentino Cortizo.

Are you interested to learn more about the project’s future development and outlook? Read this analysis for the latest XDC coin news and XDC network crypto price predictions.

What is XDC coin?

XinFin network is a hybrid blockchain focused on trade finance. It’s decentralised commercial services streamline and facilitate global trading and payment processes. The project is operated by the Singapore-based XinFin Foundation and aims:

“To leverage the facilities of blockchain platform to connect the investors and the developers in a secure environment thereby allowing them to transact finances against certain secured digital assets.”

XDC is the utility token used to facilitate transactions on the network, and reward validators. XDC network operates a Proof-of-Stake (PoS) protocol, meaning that any staking and validation requires a set number of token deposits.

XinFin described the XDC network as a hybrid blockchain, which operates a public transaction ledger but also allows users to create private sub-networks with controlled access.

Due to the hybrid nature of XDC network, XinFin said:

“The network combines an open blockchain structure with permissioned smart contracts. This combination of features enables developers to appease regulatory concerns among large financial institutions and leverage the best aspects of varying networks.”

What is your sentiment on XDC/USD?

According to XinFin’s whitepaper, the network has a total supply of 100 billion pre-mined XDC tokens. 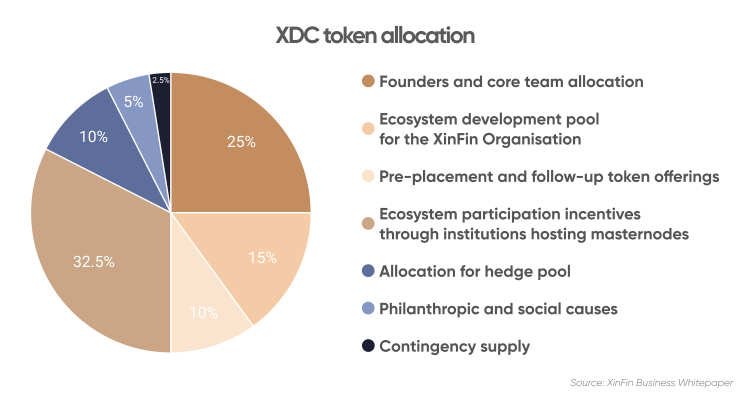 A quarter of the supply is reserved for the founders and core team, while 10% is allocated in pre-placement and token offerings. A total of 15% of the XDC supply is used to develop the ecosystem. That 15% is locked, with a maximum of 2.5% being released every year.

According to CoinMarketCap, the token has a circulating supply of 12.3 billion.

In all, 32.5% of the token supply is allocated as ecosystem participation incentives, while 10% will be used to hedge against fluctuations in the value against fiat currencies in commercial transactions. And 5% will be donated for philanthropic and social causes.

Who is behind the XDC network?

XDC network was founded in 2017 by Atul Khekade and Ritesh Kakkad. According to XinFin’s website, Khekade has 14 years experience in the technology sector and has conceptualised “the first permissioned Blockchain system for the consortium of Top Asian banks”. Khekade is leading the technology and ecosystem development at XDC network.

Kakkad’s LinkedIn profile states he is also the co-founder of a cloud hosting, web infrastructure company IndSoft Systems and a private charter arrangement company Airnetz Open platform. He is the blockchain strategist at XDC network.

The other software developer named on XinFin’s website is US-based R Quincy Jones, who has been working on the project since July 2021.

XinFin created the TradeFinex as a secure transaction platform that facilitates the trading and transaction processes between parties globally. Users can create digital smart contracts over the XDC blockchain network via its TradeFinex platform. According to XDC network:

“The platform can be used for all four stages of contracting including discovery, negotiations, contracting and execution.”

A buyer can post their procurement requirements on the TradeFinex platform, which can be viewed by global suppliers who can submit a proposal in response. If the buyer and supplier agree to trade with each other “a blockchain based smart contract (from a standard template) can be executed between the buyer and the seller. The buyer procures and deposits XDC tokens into the escrow smart contract account.”

The parties can lock in the exchange rate to minimise currency fluctuations affecting the deposited XDC tokens.

“XinFin has developed a hedge pool that protects participants from the fluctuations in the price of XDC tokens.”

When the transaction is completed, the smart contract is closed and the parties can provide ratings for each other, which will be recorded as credentials on the blockchain network. 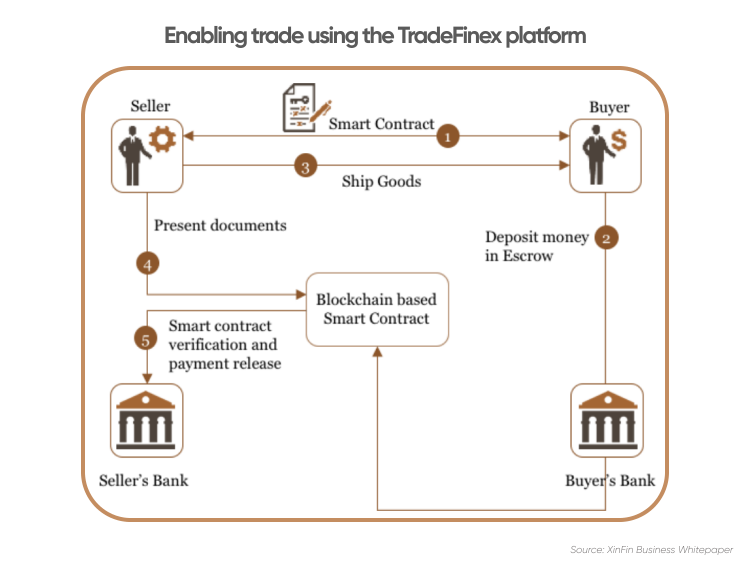 According to cryptocurrency research and data site Is This Coin A Scam, the XDC Network project has a safety score of 5.45 and was awarded an D rating, as of 11 May. According to the site, XDC scored 7.72 out of 10 on awareness, followed by 6 on trading volume and 5.4 on development. The sentiment and community score were 4.5 followed by 0.6 for credibility. The score is based on the site’s research on social media platforms such as Reddit and Twitter.

According to the research data site, XDC coin “is suited to an adventurous investment style”.

One of the red flags is that the project roadmap has not been updated since 2021 and the milestones are recorded up to 31 December 2020. Additionally, there is no recent update on any real-world use case, and the last development was when the network joined the Global Trade Finance Distribution Initiative in August 2021.

XDC network coin price prediction for 2022 and beyond

As of 11 May, market expectations varied for the token, with a wide range of XDC prediction target prices.

Wallet Investor’s XDC network price prediction was the most bullish, expecting XDC price to reach $0.279 in the next 12 months, a new record high. The token could rise further to 0.822 in 2027.

When looking at XDC forecasts, keep in mind that analysts’ projections can be wrong. Forecasts shouldn’t be used as a substitute for your own research. Always conduct your own due diligence before investing. And never invest or trade money you cannot afford to lose.