Dollar to INR forecast: What lies in store for the pair in 2022?

The value of the Indian rupee (INR) against the US dollar (USD) has depreciated since the beginning of this year, marking a decline of 4.1% at the time of writing on 25 May 2022, from its value on 1 January 2022.

This decline was driven by a string of factors, including the increasing inflation and higher interest rates, coupled with an exit of overseas investors from the Indian markets and a plunging stock market. 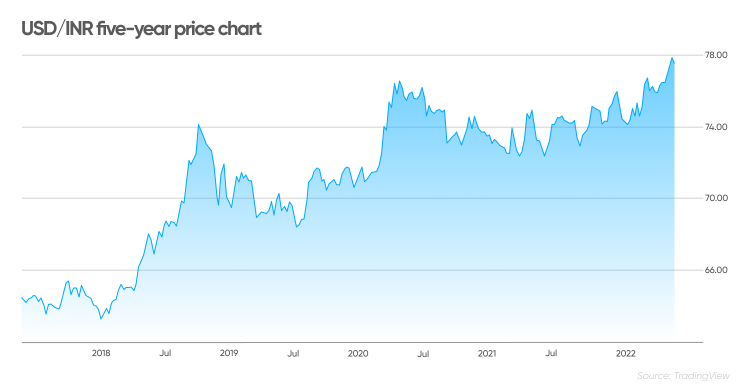 In this article, we analyse the recent macroeconomic events that led to the depreciation of the Indian rupee against the US dollar. We will also take a look at the opinions of some leading analysts about the pair, and their USD to INR prediction for the rest of 2022, as well as the period up to 2030 for the USD/INR trend.

Factors that impacted the USD

The strength of the US dollar was a result of risk-off sentiment that came partly from concerns over the US Federal Reserve’s (Fed) capability to check high inflation, which raised the US dollar’s appeal as a safe-haven currency.

The Fed’s hawkish stance toward its monetary policy has boosted confidence for further US investment.

Along with raising interest rates by 50 basis points to a range of 0.75% to 1% on 4 May, the US central bank is expected to raise rates seven times throughout this year to reach 2.9% in early 2023, as projected by The Economist Intelligence Unit.

The rate hike earlier in May was the largest since 2000, and came after a 0.25 percentage point raise in March – the first rate hike since December 2018. Now, as the US central bank tightens its monetary policy, investors are expected to consider pushing their money into the US, further raising the greenback’s demand and solidifying its value.

Additionally, the US payrolls increased by 428,000 in April, along with a 5.5% rise in average hourly earnings from a year earlier, according to the US Bureau of Labor Statistics. The unemployment rate was unchanged at 3.6% during the reported period.

The solid jobs growth was broad-based and encompassed every major industry in the country. This stellar rise in non-farm payroll employment in the country was indicative of the economic rebound from the pandemic’s impact. Higher employment shows greater demand for the country’s goods and services, and hence indicate a strong domestic currency.

“Inflation and the Fed’s upcoming rate hikes are still the biggest tail risk for US markets. Speculative growth names continue to get clobbered as valuations matter most in a rising-rate environment where future growth is no longer promising. Other than energy providers and broad commodities, it’s difficult to find a viable place to park cash in a market where inflation is at a 40-year high, money is no longer free, there is ongoing war and supply-chain issues persist. This signals headwinds for corporate America and tailwinds for the US Dollar (vs INR)”.

Factors that affected the Indian rupee

A major reason behind the INR’s depreciation against the USD has been the Russia-Ukraine war that began in February. The US dollar to Indian rupees rate hit a fresh all-time low of 77.82 on 19 May, owing to a rise in the dollar index and concerns over global economic growth.

Nish Bhatt, founder and CEO of Millwood Kane International told The Indian Express on 22 May:

1.22 Price
+0.190% 1D Chg, %
Trade Now
Swap short:
Swap long:
Trade Now
“The weak economic data around the world, especially in China, has put pressure on the dollar index, which hit a nearly two-decade high. Domestically, we are witnessing an outflow of funds as investors move funds to high-yielding investment instruments. A rise in interest rates in the US will result in further outflows.”

Higher import costs and a rising current account deficit have also played a significant role in the Indian rupee weakening.

Inflationary pressures, driven by the higher prices of food and fuel due to the Russia-Ukraine war and the Shanghai lockdowns this year, have weakened the INR further. The annual inflation rate in India rose to 7.79% in April, according to data released by the National Statistical Office. The April inflation rate was the highest since May 2014 for the country, and higher than market predictions of 7.50%.

However, the Indian central bank’s hawkish stance toward monetary policy to check inflation, along with its efforts to reverse the pandemic-era cushioning of the country’s economy, are expected to make the Indian rupee stronger against the US dollar. Theoretically, a higher interest rate (or repo rate) should attract foreign investment to India, leading to a rise in demand and a stronger currency.

The Indian central bank raised its repo rate by 40 basis points to 4.4% on 4 May – the first hike in two years – to check high consumer prices.

According to a Bloomberg report earlier this month, economists at Nomura, Barclays and Deutsche Bank expected the Reserve Bank of India to raise the repo rate by nearly 50 basis points when its monetary policy committee meets on 6-8 June.

Let’s take a look at the USD/INR analysis from a major financial institution in India and some other credible sources.

USD to INR forecast for 2022: What are analysts saying?

As of 25 May, algorithm forecaster Wallet Investor projected that the INR could be valued at a maximum of 79.331 and a minimum of 79.085 against the USD in December 2022.

According to the USD/INR projection by Kotak Institutional Equities’ report released in December 2021, the pair was expected to hit levels of 78.00/78.30 if it sustained above 77.

“USD/INR is coming out of one of the longest consolidation phases since 2008. The longer it can sustain above 75.25 the bigger the possibility is for a breakaway move towards all-time highs near 77.00 levels. If it can sustain above 77, then the next target is 78.00/78.30 levels on spot,” the USD/INR news report stated.

According to another report by the Financial Express on 4 May, Kotak Institutional Equities said it expected the Indian rupee to remain under pressure due to the anticipated rate hikes by the US Federal Reserve. Volatile oil prices are also expected to take a toll on the currency. However, the institution said India’s $600bn foreign exchange buffer “should help shield the economy against any major external shock”.

Note that analyst dollar to INR future predictions can be wrong and currency pairs can be highly volatile. Forecasts shouldn’t be used as a substitute for your own research. Always conduct your own due diligence before investing. And never invest or trade money you cannot afford to lose.